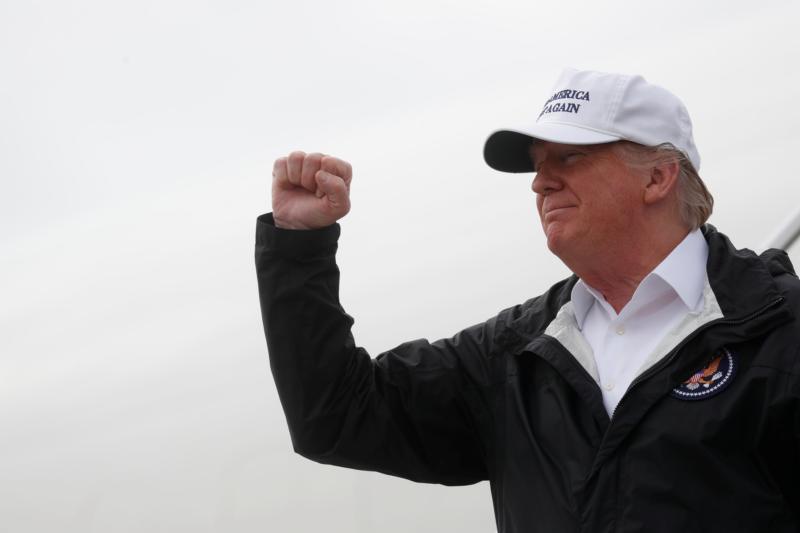 President Donald Trump pumps his fist as he arrives for a Jan. 10 visit to the U.S.-Mexico border at McAllen-Miller International Airport in McAllen, Texas.  (CNS photo/Leah Millis, Reuters)

MCALLEN, Texas (CNS) — President Donald Trump joined a roundtable discussion to hear about how agencies in South Texas are responding to the influx of refugees on the southern border.

The discussion Jan. 10 came a day after Sister Norma Pimentel welcomed the president to the Rio Grande Valley and invited him to see the work of staff and volunteers assisting people from throughout Central America seeking asylum in the United States.

The invitation from Sister Pimentel, executive director of Catholic Charities of the Rio Grande Valley in the Diocese of Brownsville, Texas, appeared in an op-ed she penned for The Washington Post.

The president also joined a roundtable presentation on the situation facing migrants and those who serve them during his visit to the center.

The column explained the work of the center since 2014, when tens of thousands of people mostly from El Salvador, Guatemala and Honduras made their way northward to flee violence and poverty in their homeland.

Sister Pimentel said the center — offering shelter, meals and showers for people who have been released after being apprehended by authorities as they crossed into the U.S. — has welcomed more than 100,000 people since opening.

She invited the president to see how the center cooperates with U.S. Customs and Border Protection agents to ensure the needs of the newcomers are met.

“We work closely with the U.S. Customs and Border Protection Rio Grande Valley Sector, and our team has cultivated a culture of mutual respect and dialogue,” wrote Sister Pimentel, a member of the Missionaries of Jesus. “Our center staff, in communication with the Border Patrol, prepares to receive groups of immigrants who have been released. We try to meet the need.

“It is vital that we keep our country safe, and I appreciate the work of the men and women in the U.S. Customs and Border Protection who are vigilant as to who enters our country. I pray for them daily.”

She detailed daily life at the center, from early morning until bedtime in the evening, explaining the tasks staff and volunteers undertake to ensure the dignity of the immigrants.

“I am energized each day by the families I meet, especially the children,” Sister Pimentel wrote. “I am energized as well by the volunteers. They come from our local communities but also from across the United States. We witness daily how, working together, people of all faiths can focus on helping the person in front of us. Regardless of who we are and where we came from, we remain part of the human family and are called to live in solidarity with one another.

“As the Most Rev. Daniel E. Flores, bishop of our diocese, says, ‘We must put human dignity first,'” the op-ed concluded.

NEXT: Brooklyn Diocese helps victims of Volcano of Fire in Guatemala