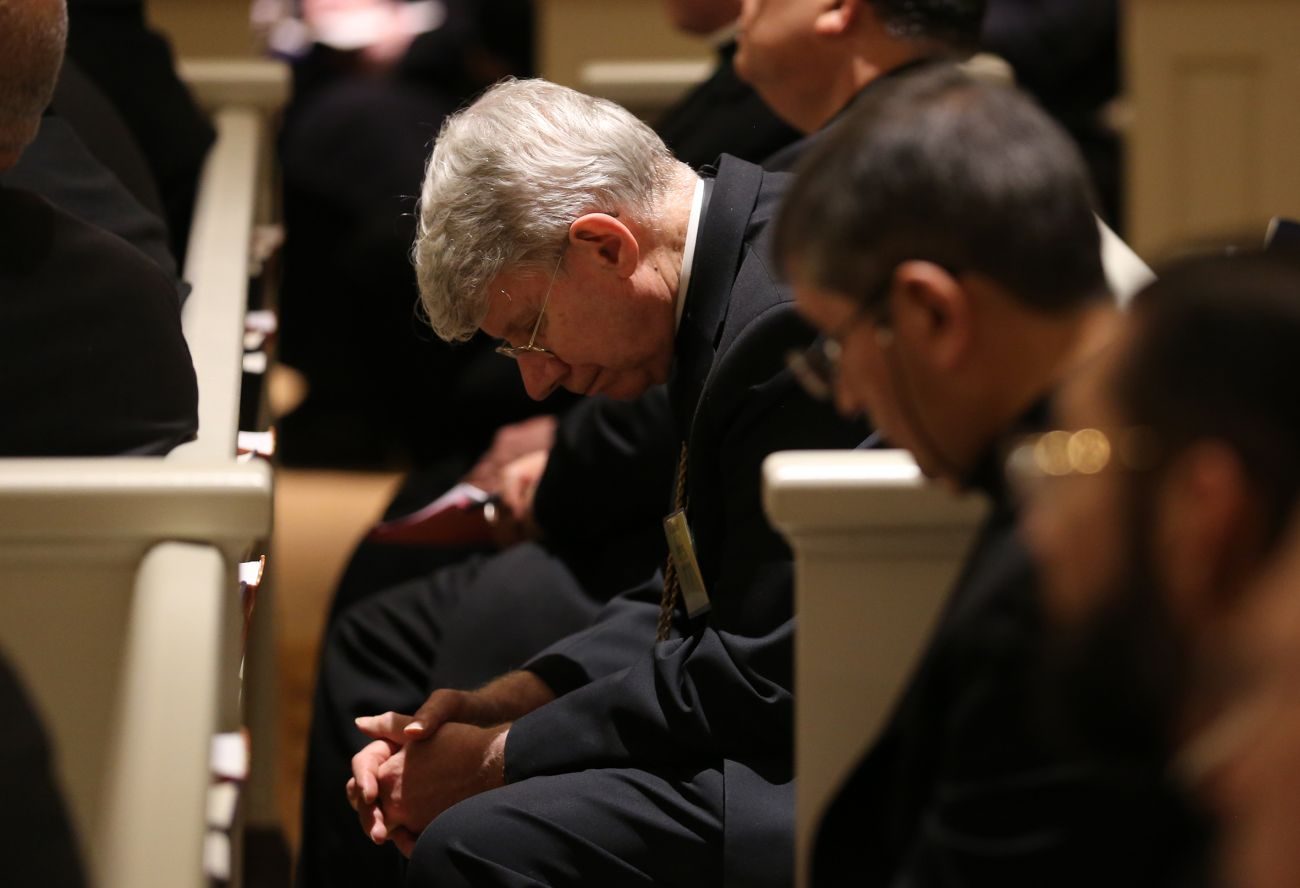 U.S. bishops attend a prayer service in the Chapel of the Immaculate Conception at Mundelein Seminary Jan. 2 at the University of St. Mary of the Lake in Illinois, near Chicago. The U.S. bishops began their Jan. 2-8 retreat at the seminary, suggested by Pope Francis in September, which comes as the bishops work to rebuild trust among the faithful as questions continue to revolve around their handling of clergy sex abuse. (CNS photo/Bob Roller)

UPDATED – WASHINGTON (CNS) — The U.S. Catholic bishops are taking part in a closed-door retreat Jan. 2-8 at Mundelein Seminary at the University of St. Mary of the Lake near Chicago to prayerfully consider ways to rebuild trust over the clergy sex abuse crisis.

“We are honored to welcome the bishops of the United States to Mundelein as they prayerfully unite to reflect on the urgent issues facing the Catholic Church today,” said Father John Kartje, rector of Mundelein Seminary in a statement.

He said it was fitting that the bishops were gathered where “seminarians come from around the nation to be formed into the next generation of parish priests and hundreds of lay men and women are trained for parish service.” He added: “The people of God deserve servant-leaders who are holy, joyful and competent in their ministry.”

Mundelein Seminary is the major seminary for the Archdiocese of Chicago and is the largest Catholic seminary in the United States. It currently has more than 200 seminarians from 34 dioceses across the country and around the world.

The structure of the retreat will emphasize quiet reflection, including silent meal times, and will offer daily Mass, time for personal and communal prayer before the Eucharist, vespers and an opportunity for confession. No ordinary business will be conducted.

Capuchin Father Raniero Cantalamessa, preacher of the papal household, is leading the retreat with the theme, “the mission of the apostles and their successors.” This time of prayer came at the suggestion of Pope Francis and was planned largely in response to last summer’s revelations of sex abuse that reached the highest levels of the U.S. church.

In a letter distributed to the bishops at the start of the gathering, Pope Francis said he was convinced their response to the “sins and crimes” of abuse and “the efforts made to deny or conceal them” must be found through “heartfelt, prayerful and collective listening to the word of God and to the pain of our people.”

“As we know,” he said, “the mentality that would cover things up, far from helping to resolve conflicts, enabled them to fester and cause even greater harm to the network of relationships that today we are called to heal and restore.”

Prior to the retreat’s start, Msgr. Jeffrey D. Burrill, associate general secretary of the U.S. Conference of Catholic Bishops, told CNS that more than 200 bishops were expected to attend. Active U.S. bishops number 271 and there are 185 retired bishops.

A few bishops have tweeted about the retreat and asked for prayers. Portland Archbishop Alexander K. Sample, tweeted en route to the retreat: “Pray for us that our response to the call to holiness will be renewed and that we will be faithful shepherds according to the mind and heart of Christ and his apostolic Church.”

New York Cardinal Timothy M. Dolan asked for prayers in his tweet, which described the retreat as means to “respond to important matters facing the Church. Our first reliance is upon the Lord’s grace & mercy. Without intense prayers for healing, guidance, in reparation, we will not be successful.”

Bishop Frank J. Caggiano of Bridgeport, Connecticut, tweeted praise for the opening remarks of Father Cantalamessa, which he said focused on the “need to choose the right priorities around which we can live our daily lives. Of course, a central priority is daily prayer.”

During the retreat, many Catholics were joining in prayer for its success.

The website of Mundelein Seminary encouraged people to “join our seminary community in an online prayer chain for the healing of the Catholic Church,” suggesting that Catholics pray the rosary, attend daily Mass, engage in an act of penitential sacrifice or simply offer the prayer posted on their website – https://bit.ly/2VrAlST — called “Prayer for the Healing of Our Church.”

St. Maximilian Kolbe Shrine, adjacent to the University of St. Mary of the Lake in Libertyville, Illinois, was conducting its usual 24-hour adoration during the bishops’ retreat with specific emphasis on praying for the bishops.

Its website urged Catholics who could not pray at the shrine to pray at their own parish adoration chapel that the bishops’ retreat would be “truly guided by the Holy Spirit.”

Conventual Franciscan Father Benedict La Volpe, the shrine’s rector, told Catholic News Service that the shrine, where perpetual adoration “has been nonstop since 1928” has had more participants since the bishops’ retreat began Jan. 2.

He stressed that abuse victims are always in the church’s prayers but during this time of retreat, there is an urgency to pray for the bishops, specifically, that they “understand what happened and what needs to happen.”

The priest, who was going to hear confessions during the retreat, said he hoped the bishops would take away from this gathering the importance of taking time to “pause, pray, reflect and convert.”

NEXT: Atlanta nurse helps others while her own immigration status is in limbo