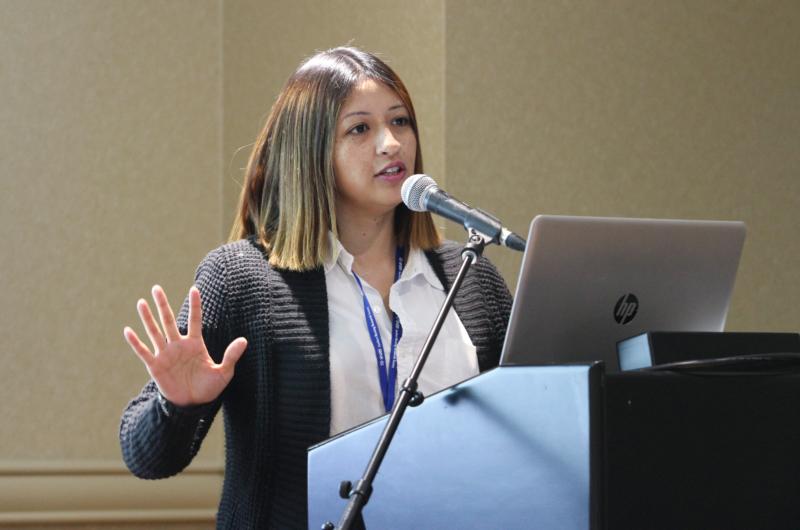 ATLANTA (CNS) — Roxana Chicas’ goal is to help farm workers and others avoid illnesses from working in the grueling sun.

People who make a living outside — from construction crews to farm workers — can suffer serious damage to kidneys and the brain from the extreme heat.

Hispanic workers picking crops in Florida were surprised to see this native of El Salvador during her research trip to the state, organized with the Farmworkers Association of Florida. Relying on her language skills and cultural background, Chicas gained the workers’ trust. They connected with her stories about her mom working in the fields. Her team collected data and shared tips with them about how to avoid the worst of the sun when a body’s temperature can hit 104 degrees Fahrenheit.

Chicas, 36, studies at Atlanta’s Emory University as a nurse-scientist with a focus on cooling workers’ body temperatures below fever-like conditions.

“They find it interesting and curious that I am much like them,” Chicas said of the workers.

Chicas is pursuing a doctorate in nursing at the university’s Nell Hodgson Woodruff School of Nursing. At the same time, she also follows the news related to her temporary protective status. TPS is an immigration status granted to people fleeing natural disasters or social unrest. Recipients are eligible to live and work in the United States.

In 1986, Chicas’ country was in the midst of a violent civil war. Six years before that, the archbishop of San Salvador, St. Oscar Romero, and four American Catholic missionaries were murdered. Some 75,000 were killed during the 12-year war.

Her mother fled the country from fear of violence and gangs targeting women. Chicas was 4 when her mother brought her to the United States.

“I don’t remember really the journey, but I do remember that we crossed the river, which was the Rio Grande and she had me on her shoulders as we crossed it,” Chicas told the Georgia Bulletin, newspaper of the Archdiocese of Atlanta, sitting in a classroom on the Emory campus.

They crossed into the United States without authorization and settled in Atlanta’s suburbs.

Then in 2001 a massive earthquake in El Salvador created a humanitarian crisis when more than 1,000 people died. In response, President George W. Bush authorized temporary protective status for people from El Salvador. Chicas was eligible for TPS, and since then she checks in with the federal Department of Homeland Security to renew her status about every 18 months.

“I still worked as a server when I got my work authorization. That kind of opened the door for me to say, ‘Oh I don’t just want to a server,'” she said. Instead, Chicas looked in the classified ads to see what other work was available. She said, “I’m just going to circle everything that says bilingual needed, willing to train. I didn’t care what sector it was.”

She worked in a chiropractor’s office for two years until she moved to a pediatrician’s office. The doctor’s staff encouraged her during her 10 years working there to pursue nursing.

Meanwhile, DHS announced in January 2018 it would cancel the TPS for natives of El Salvador, like Chicas. In a statement, DHS said it revoked the status because the basis for the protection is no longer valid.The announcement means more than 200,000 Salvadorans would no longer have permission to be in the United States.

However, in October, a federal judge temporarily blocked the plan. TPS remains in effect while the case proceeds.

Ashley Feasley, director of migration policy and public affairs for the U.S. Conference of Catholic Bishops, said the bishops are advocating for people like Chicas. Individuals with the protective status have deep roots in America, she added. They opened businesses, bought homes and raised families. They are individuals and families striving to live the American dream, but a broken immigration system is pushing them out.

Also, there are an estimated 192,000 U.S. citizen children with parents who risk losing their immigration status, Feasley said. If their work authorization is taken away, they face “undesirable choices:” to stay and become undocumented, return with families to unstable countries not able to take them in, or to split up their families, Feasley said. “The concern is very real.”

A 2017 report from the bishops’ Migration and Refugee Services Committee said deporting people back to El Salvador could be “catastrophic” for the country with an inability to absorb the people repatriated.

“I believe in the justice system and I believe that eventually things will get better and this is part of the growing pains that this country is having with its different types of people that live here,” Chicas said.

Nelson is a staff writer for the Georgia Bulletin, newspaper of the Archdiocese of Atlanta.

NEXT: Chicago lay movements gather to pray for U.S. bishops on retreat