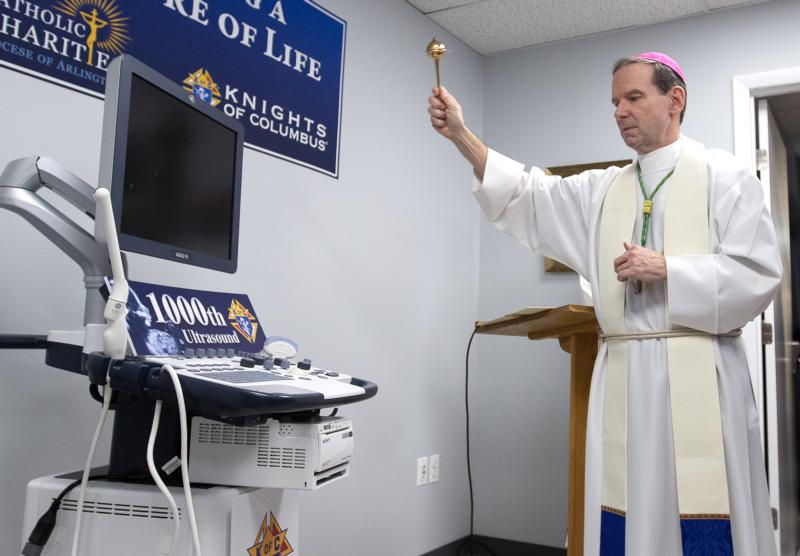 MANASSAS, Va. (CNS) — For years, two diametrically opposed organizations coexisted next to each another in a nondescript office park in Manassas: Amethyst Health Center for Women, an abortion clinic, and AAA Women for Choice, a pregnancy resource center.

In 2015, the abortion clinic closed its doors for good and the property was purchased by the BVM Foundation, a group of Catholics in the Diocese of Arlington who had long hoped for its closure.

They, in turn, approached the diocese’s Catholic Charities, which turned the space into the Mother of Mercy Free Medical Clinic in 2017.

But the transformation wasn’t complete yet. The old sites of the two organizations combined to form one medical center for the poor.

Arlington Bishop Michael F. Burbidge blessed the space that once housed AAA Women for Choice and is now the newly expanded wing of the clinic Jan.14. The space houses rooms for prenatal care; offices for adoption services; Gabriel Project, which serves pregnant mothers in need; and Project Rachel, which ministers to post-abortive women.

The two ultrasounds are the 999th and 1,000th ultrasounds provided through the decade-old Knight Ultrasound Program. “They were twins,” quipped Katherine Adams, executive director of the Warrenton Pregnancy Center.

“One of the proudest days of my life as Supreme Knight was when I heard that we had placed the 1,000th machine here in Virginia,” said Supreme Knight Carl Anderson during the ceremony. “There’s an old proverb that whoever saves a child saves a world. No phrase could better describe this ultrasound program. We are saving worlds. We are letting women know the truth.”

After a reading from the Gospel of Matthew and the prayers of the faithful, Bishop Burbidge blessed the ultrasound machine, the new wing and the crowd.

“We want to do everything we can to promote the Gospel of life, but ultimately it’s entrusting our work and our intentions to the Lord. It’s ultimately his work and upon his grace that we must depend,” he said.

Prenatal care began less than a week before at Mother of Mercy and the machine already has been used, said director Alexandra Luevano.

“I can tell you that it brought tears to my eyes as well as to the mom’s to see her baby dancing in her womb for the first time,” she said.

“It has been such a blessing, and I can’t wait to see all the amazing things we’re able to do thanks to your donation,” she told the crowd.

After 13 months in business, the Mother of Mercy Clinic is open around 24 to 36 hours a week so that more than 200 volunteers can serve some 600 clients.

It’s an impressive accomplishment for such a short amount of time, but the work really began when pro-lifers started to pray outside the abortion clinic years ago, said Art Bennett, president and CEO of diocesan Catholic Charities.

“We’re talking about a quarter-century of prayer and fasting, and now the mustard seed is in bloom,” he said.

In addition to those pro-lifers, Bennett praised the employees of AAA Women for Choice. “When they would come to work in this room, they could hear the machine go on, and they knew what that meant. Talk about courage, talk about leaning in,” he said.

He also thanked the generous and dedicated BVM Foundation. “When they see something, they go for it.”

A less conspicuous recent addition to the clinic hangs between two examination rooms: a painting of Mary dressed in pink with a blue cloak covered in stars. When light hits the piece just right, the unborn baby Jesus is visible in Mary’s womb, outlined faintly in gold.

Helen Dickey, a parishioner of St. Thomas a Becket Church in Reston, painted the piece, and then donated it to the parish auction with the stipulation that it should be donated to a pro-life organization.

Deacon Jack F. Vassallo bought the piece, and he and his wife, Barbara, who volunteers as a nurse practitioner for the clinic, donated it to Mother of Mercy.

Though the traditional image of Our Lady of Guadalupe shows Mary looking down, “I wanted to show her looking up and presenting to us what’s in her womb,” said Dickey.

The golden, developing baby Jesus is an appeal for people to realize the importance of the unborn, she said. Much like the new ultrasound machine provides, the painting is “a peek inside the womb.”