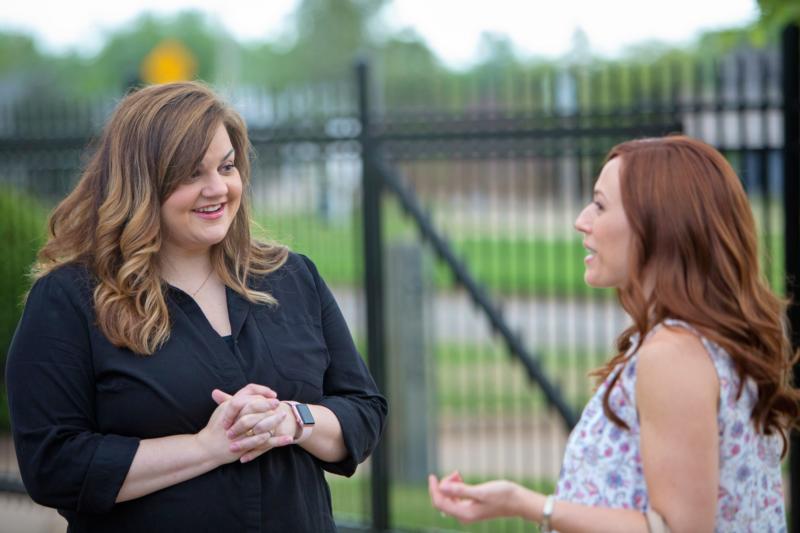 Abby Johnson, left, is seen on the set of the movie “Unplanned” with actress Ashley Bratcher, who plays her. The movie details the story of Johnson, a former Planned Parenthood administrator who quit that job to join the pro-life movement after her up-close interaction with abortion. (CNS photo/courtesy Unplanned)

WASHINGTON (CNS) — When it comes to speaking her mind, Abby Johnson never holds back. Affable in a way usually described as down-home, as the mother of seven children, she finds that a certain bluntness suits her best.

It’s the only way, she concedes, to keep order in her household.

Johnson, the pro-life activist and founder of And Then There Were None, will have just four minutes to make her points when she speaks to the March for Life rally Jan. 18, and she’ll have to take some months off after her eighth child is born in June.

A new film drama, “Unplanned,” based on her 2011 memoir of working for Planned Parenthood, will do all the talking for her soon.

And that means losing a bit of the control she’s had over her own life story since she began making speeches almost 10 years ago. She’s thrilled, of course, but quickly told Catholic News Service in an interview, “It felt like I’m making myself very vulnerable here in a way I haven’t before.”

“Everyone in America is going to have the opportunity to see the worst version of me. So I really prayed about it. I felt very anxious about it.”

Written and directed by Chuck Konzelman and Cary Solomon, who also made the three “God’s Not Dead” films, and starring Ashley Bratcher as Johnson, it’s set to hit theaters March 22. Excerpts will be shown during the rally on the National Mall.

“I’m telling you, this is anointed,” Solomon said at a November screening at the Secretariat of Pro-Life Activities of the U.S. Conference of Catholic Bishops in Washington. “This has nothing to do with us.”

“Abortion is not going to stop on its own,” he added. “Media (are) the most powerful weapon there is.”

The film takes viewers inside procedures at the clinic where Johnson worked, including abortions resulting from the RU-486 (mifepristone) protocol, and covers her life and career through the time she joined the clinic, interactions with pro-life protesters, her resignation, and a later legal challenge from Planned Parenthood over revealing information in clinic documents, in which she prevailed. There’s also a cameo by Mike Lindell, founder of My Pillow, who helped finance the movie.

Johnson will be among more than 10 March for Life rally speakers, including journalist Ben Shapiro and Carl Anderson, Supreme Knight of the Knights of Columbus, along with several members of Congress. The rally and march will proceed regardless of the status of the federal government shutdown, said Jeanne Mancini, president of the March for Life Education and Defense Fund.

Johnson, a Texas native, began volunteering for Planned Parenthood in 2001, joined its clinic in Bryan, Texas, shortly later, and resigned in 2009 after participating, she says, in an ultrasound-guided abortion of a 13-week-old fetus.

“It was the power of the ultrasound that changed my heart,” Johnson says. “Now science has ruled definitely that there’s life in the womb.”

“Unplanned” joins two other recent pro-life dramas. “Gosnell: The Trial of America’s Biggest Serial Killer,” based on the crimes of a Philadelphia abortion doctor, Dr. James Gosnell (played by Earl Billings), was released last year. “Roe v. Wade”, a drama based on the 1973 Supreme Court decision that legalized abortion and starring Jon Voight as Chief Justice Warren Burger, has had a complicated production history and as yet has no release date.

“We’re trying to serve the Lord. And you know what? We’re going to get ripped,” Solomon said. “America cannot continue to exist if we do abortion. It will destroy us.”

Johnson found the two filmmakers easy to work with. “I wanted it to be accurate. We had a lot of conversations over what I did and didn’t want.” When a draft script was sent for her approval, she found “it was done really well. I told them go come down here to Texas. So we got started.”

She thinks Bratcher is “amazing.” “When I went on set the first time and saw her playing me, I started laughing when I saw her facial expressions,” Johnson said. “It really was me.”

Johnson’s faith journey began with a Baptist upbringing. At the time of her Planned Parenthood involvement, she was a member of an Episcopal parish, but “when I became pro-life, the priest told me I was not welcome,” and she and her husband, Doug, joined a Missouri Synod Lutheran congregation.

Becoming a Catholic in 2012, she said, was an easy transformation. “When I left Planned Parenthood, I left all my friends behind. All my new friends happened to be Catholic. It felt so familiar and it just felt right.”

The film shows abortion equipment and procedures, but stays away from many details, usually reminding viewers that pain is always involved. “I think it would have been really lost on people if they’ve been medically detail-oriented.”