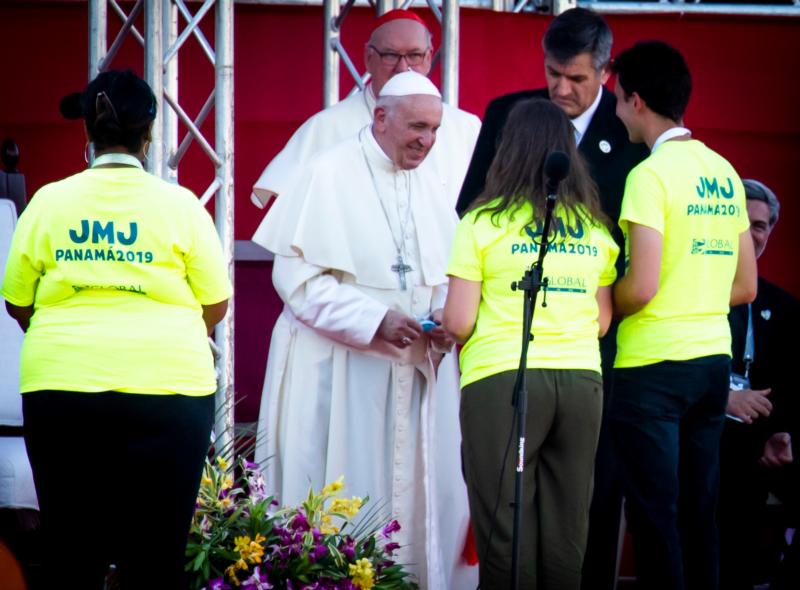 PANAMA CITY (CNS) — Just before leaving the physical and human warmth of Panama Jan. 27, Pope Francis stopped to thank the thousands of official volunteers, young and old, gathered at the capital city’s Rommel Fernandez Stadium to tell them that they had just participated in an event similar to one that took place early in Christianity.

In their case, they didn’t just multiply food, he said.

“You could have easily chosen to do other things, but you wanted to be involved, to give your best to making possible the miracle of the multiplication, not only of loaves, but also hope,” he said, telling the volunteers to go out into the world and make that attitude contagious. “We need to multiply that hope.”

Volunteers at Panama’s World Youth Day showed it was possible to renounce one’s interests in favor of others, the pope said.

On stage, before the pope spoke, Bartosz Placak of Poland offered his testimony in Spanish to those gathered at the stadium and said that while volunteering for World Youth Day in Panama, he had experienced a taste of what living in the early Christian communities must have been like: sharing food, homes, anything other people needed.

“In sharing, you create a small community and we return to the times of the first Christians … we follow their example,” he said.

Panamanian volunteer Stella Maris del Carmen told the story of how she had planned to attend the previous World Youth Day, an event she’d longed to attend since she was a child. She had saved enough money to go to Poland in 2016 and then her grandparents died. She canceled her plans and used the money she had saved to tend to her family.

The pope said he was touched by her story. By renouncing the trip for the family, “you honored your roots,” the pope told her. “That’s what makes you a woman, an adult.” But then consider what happened because of that sacrifice, he said.

“The Lord had the gift of (World Youth Day) waiting for you in your homeland,” he said. “The Lord likes to play those tricks. That’s how God is.”

What a person gives to others “the Lord returns” many times over, he said. And the world needs more such examples of surrender and love to provide a “balm in the lives of others,” he said.

Panamanians certainly had heeded that counsel long before the event.

World Youth Day 2019 in Panama may not have been the largest, in terms of attendance. Event officials say some 113,000 registered as pilgrims to attend various events — though it was obvious that many more who did not register filled up the venues.

What the event in Panama may — or may not — have lacked in numbers, it made up for in its treatment of young pilgrims. Priests, bishops, women religious and thousands of volunteers, young and old, officially and unofficially, seemed to devote more quality time to participants than in the past, said pilgrims such as Francisco Apenu Cofie of Ghana.

“It was more intimate,” said Cofie, who attended World Youth Day in Poland and Brazil. Panama had a special touch, he said.

Those like Polish volunteer Placak said it was not always easy to help and admitted moments of weakness, but he said he learned powerful lessons along the way.

“I have received more than what I expected, and this is the mystery of the divine gifts. I am happy,” he said.

Though the pope spent time with the volunteers who attended the ceremony at the stadium, there were thousands of other unofficial helpers, such as those who offered water to pilgrims passing through their neighborhoods, who sprayed them with water hoses to cool them off, and offered use of their facilities or couches to rest, but who did not attend the event.

“Thank you all, because in these days you have been attentive to even the smallest details, however ordinary and apparently insignificant, like offering someone a glass of water,” the pope said to volunteers at the ceremony.

In giving to others, God blesses, the pope said,

“You have had a more lively and real experience of faith. You have experienced the strength born of prayer and a new and different kind of joy, the fruit of working side by side even with people you did not know,” he said.

There were many moments when volunteers did not understand the pilgrims or vice versa but, by and large, most did not let that stop them from attempting to communicate with one another.

Panamanians outwardly celebrated pilgrims from various visiting countries, spontaneously shouting out the name of the nation as they spotted them carrying their respective flags on the streets of their city.

One of the gifts of Panama’s World Youth Day, El Paso Bishop Mark J. Seitz told Catholic News Service, is that at a time when some in the world are embracing nationalism, the international Catholic festival for youth, in which 156 countries participated, delivered the opposite message. People from different countries, who spoke different languages and had different customs and practices, managed to unite around faith and serving others.

“World Youth Day says, ‘We’re one family of humanity,'” Bishop Seitz said. “Separating ourselves from others does not make us secure.”

NEXT: Bishops must realize seriousness of abuse crisis, pope says