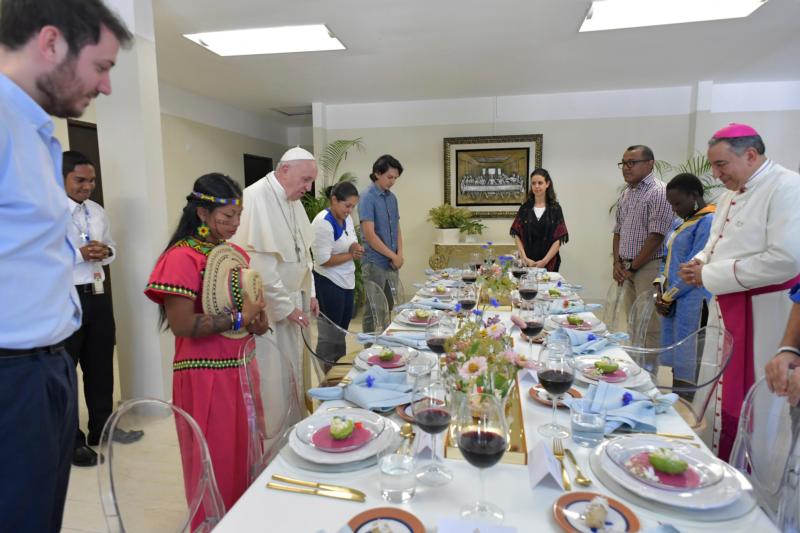 PANAMA CITY (CNS) — While sharing a private lunch with pilgrims from around the world, Pope Francis expressed his solidarity with victims of sexual abuse by members of the clergy and emphasized the need for unity and prayer, a U.S. pilgrim said.

Brenda Noriega, a youth minister from the Diocese of San Bernardino, California, told journalists Jan. 26 that although the experience of sharing a meal with the pope was “amazing,” she said the crisis facing the Catholic Church in the United States was an issue “that we couldn’t avoid talking about.”

Noriega was among the group of 10 pilgrims — five men and five women — chosen to share a meal with the pope at St. Joseph’s Major Seminary in Panama.

The young adults who later spoke to journalists were from the United States, Australia, the Palestinian territories, Burkina Faso, India, Spain and Panama. Each participant was given the opportunity to ask Pope Francis a question.

Noriega said it was important for her to ask the pope about the abuse crisis. His affirmation of the church’s support for survivors of sexual abuse, she said, was important to hear.

She also said Pope Francis emphasized the need for a more pastoral church, as well as the importance of prayer in discerning the best way to counter the culture of abuse and cover-up that has plagued the Catholic Church in the United States and abroad.

She added that the pope’s call to prayer was meaningful for her as a youth minister in her diocese.

“Youth ministers, we’ve been with the people, we’ve been angry, but sometimes we forget about prayer, because we react too easily and too fast,” Noriega said. “What I think the Holy Father is telling us, to the church, is to first pray and to build the communion, and not forget about accompaniment.”

The sexual abuse of minors and vulnerable adults, she recalled the pope saying, “is a horrible crime” and “the church does not support these types of crimes.”

Noriega, who was born and raised in Mexico before moving to California, told journalists that representing Catholic young people in United States at the private lunch was a special moment.

“Maybe you are wondering,” she told journalists, “why is the representative of the U.S. ‘toda morenita’ (all brown)? The new face of the Catholic Church in the United States has my face. It is Hispanic.”

Noting that an estimated 60 percent of U.S. Catholics under age 18 are Hispanic, Noriega said her representing the country was a way for the U.S. church to say, “We are with the Hispanic community, we are ready to let you be protagonists of Catholicism in the United States.”

The other young adults also took the opportunities to address issues facing Catholics in their homelands.

Dana George Daoud Salah, a young woman from the Palestinian territories, expressed her concerns regarding Christians leaving her country and what that would mean for the church.

Bedwin Taitus K of India told journalists he initially was nervous, but he became at ease and was moved when the pope told him that “he takes India in his heart and deeply cares for India.”

Taitus also said his question for Pope Francis was “very different” than that of his peers.

“I asked him how many hours does he sleep,” Taitus said. “He laughed and he told me he sleeps for six hours. I told him that I would pray for you that every day you sleep peacefully.”

The pope’s response to his offer for prayer, Taitus recalled, “was very thought-provoking.”

“He told us, ‘You have to take care of your Holy Father.’ So, I had a very beautiful experience.”

PREVIOUS: Jesus’ love does not use labels, pope tells young detainees in Panama