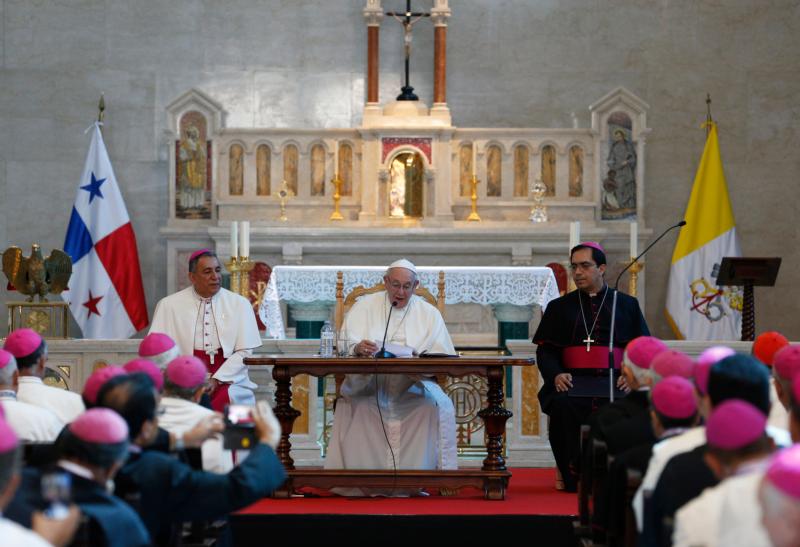 PANAMA CITY (CNS) — Bishops should follow the example of St. Oscar Romero, who cared for his flock with the heart of a father rather than become authoritarians lording over those in their care, Pope Francis said.

Meeting with Central American bishops in Panama Jan. 24, the pope said the World Youth Day celebrations offer an opportunity for bishops to “encounter and draw even closer to the experiences of our young people, so full of hope and desires, but also many hurts and scars.”

“Snatch them from the streets before the culture of death can entice their young minds and sell its smoke and mirrors, or offer its chimerical ‘solutions’ to all their problems. Do so, not paternalistically looking down from on high, because that is not what the Lord asks of us, but as true fathers and brothers to all,” he said.

After meeting with government authorities earlier in the day, the pope made his way by foot to the Church of St. Francis of Assisi, a 17th-century church near the historic section of Panama City.

Pope Francis was greeted with cheers from hundreds of pilgrims gathered outside, including a group from El Salvador.

Holding up a portrait of St. Oscar Romero, the recently canonized archbishop of San Salvador who is among the patron saints of the World Youth Day celebration, the pilgrims chanted “Aqui esta San Romero y El Salvador” (St. Romero and El Salvador are here).

Arriving at the entrance of the church, the pope was welcomed by Archbishop Jose Ulloa Mendieta of Panama and Archbishop Jose Luis Escobar Alas of San Salvador, president of SEDAC, the Episcopal Secretariat of Central America.

Greeted with applause as he made his way inside the church, the pope began the meeting by praying a “Hail Mary” with the bishops.

In his speech, the pope recalled the lives of laypeople and religious men and women, as well as priests and bishops who gave their lives to keep the church’s voice alive “in the face of injustice, the spread of poverty and the abuse of power.”

Their names, he said, were often besmirched and considered “bad words.” Nevertheless, their “persistence showed the way.”

Among the most prominent, he continued, was St. Oscar Romero, whose legacy remains an inspiration for bishops who are “likewise called to the daily martyrdom of serving our people.”

His name, he said, “was also a ‘bad word’: suspected, excommunicated and (a victim of) the murmuring of many bishops.”

The grace of martyrdom, he said, “has nothing to do with faintheartedness” but instead comes from a sense of true love and appreciation for the church and “the unmerited blessings we have received.”

This love, he added, is a gift that frees Christians from the temptation of thinking “that we are its proprietors or its sole interpreters.”

“We did not invent the church; she was born with us and she will carry on without us. This attitude, far from encouraging sloth, awakens and sustains boundless and unimaginable gratitude,” the pope said.

St. Oscar Romero, he continued, was neither an “ideologue or ideological” but instead was guided by the Second Vatican Council and showed that a pastor, “in order to seek and discover the Lord, must learn to listen to the heartbeat of his people.”

“It is important, brothers, that we not be afraid to draw near and touch the wounds of our people, which are our wounds, too, and to do this in the same way that the Lord himself does,” the pope said.

Pope Francis urged bishops to be close to young people who often feel “boxed in” and seek easy solutions to difficult problems “that end up costing dearly.”

Among the problems facing young people in Central America, he said, were domestic violence, armed gangs, drug trafficking and the sexual exploitation of minors as well as the killing of women, which he compared to “a plague.”

Migration, he continued, is another issue affecting young people in Central America, and it is an area where the church can provide “the fraternal hospitality and acceptance” that can help overcome the fears and suspicions against migrants.

Departing from his prepared remarks, Pope Francis expressed his concern that compassion “has lost its centrality in the church,” particularly within Catholic media.

“There is stigma, condemnation, viciousness, praising one’s self, denunciations of heresy,” he said. “We cannot lose compassion in our church, and bishops cannot lose the centrality of compassion.”

Bishops, he added, must also show great care for the well-being of their priests to ensure that compassion remains at the center of their ministry.

“It is important that the parish priest encounter a father, a shepherd in whom he can see a reflection of himself, not an administrator concerned about ‘reviewing the troops,'” Pope Francis said.

“The joy of a father and pastor lies in seeing his children grow and become fruitful. Brothers, let this be our authority and the sign of our fruitfulness.”