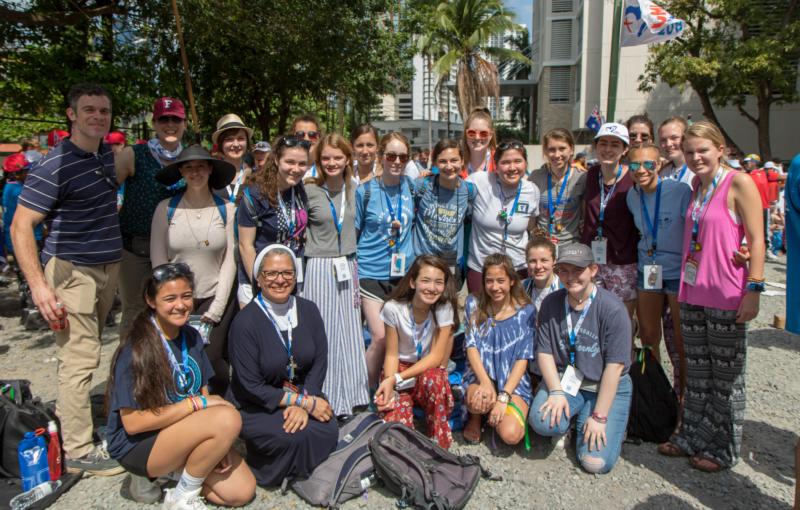 A group of 24 students and three chaperones from Georgetown Visitation Preparatory School in Washington pose for a group photo during the first catechesis session for World Youth Day in Panama City Jan. 23, 2019. (CNS photo/Daphne Lindsey, Archdiocese of Washington)

PANAMA CITY (CNS) — Dallas Bishop Edward J. Burns encouraged World Youth Day pilgrims to be like Samuel, who said to God, “Here I am,” and, “Speak Lord, for your servant is listening.”

“We have our idea of what we want to do with our lives,” he said, noting that sometimes instead of saying, “‘Speak Lord, for your servant is listening,’ we are tempted to say, ‘Listen Lord, your servant is speaking.'”

During one of the first English-language catechesis sessions during World Youth Day, the bishop told young people gathered at San Francisco de la Caleta Parish “to say ‘yes’ to the Lord is to enter into the mystery of God’s love for us.”

Later, during the Jan. 23 session, the young people asked him questions about how they could find their future spouse, discern a call to religious life, and live as a Catholic while experiencing same-sex attraction.

The bishop said although an angel came to Mary to ask her to give birth to Jesus, the angel then left, and “the rest of her life she had to trust in the mystery of the plan God had for her.”

He said he often tells young men who are discerning the priesthood, “If you are going to listen to the Lord, hold onto your seat, because you are in for a ride.”

This was the experience of Sister Sylvie-Marie Guerron, a Sister of the Visitation who accompanied a group of 24 students from Georgetown Visitation Preparatory School in Washington to World Youth Day. She heard the call to enter religious life later in her life, after working in the travel and tourism industry for 20 years, and entered the Georgetown Visitation monastery three years ago.

“This was the last thing I wanted in my life,” she said, explaining that she used to think religious life would be constraining. “Now, I feel freer than ever.”

Recalling how she used to believe all the lies of the world and was “drowning in sin,” Sister Sylvie-Marie said, “To think the Lord wants me as a spouse … this would never have happened if God had not poured his graces upon me.”

“I was very rebellious, I never opened my heart and said, ‘Here I am,'” she added.

When she had discerned a call to religious life, she thought she wanted to be completely cloistered, but her spiritual director told her that God had given her the gift of being able to work well with people, so she should consider something else. At that point, since she had spent so much of her life holding back certain things from God, she wanted to give everything to Him, and said, “God, where do you want me?”

Although she said Washington was the last place she wanted to be, now she loves the opportunity to share her joy and her story with the students and spend time in prayer at the monastery there.

“If you let him, he knows where to place you,” she said.

As she accompanies the students to World Youth Day, she said, she wants them to feel part of a community and know, “we are not alone on the faith journey. We have many companions.”

“Visitation is about joy … and that is what you feel here,” she said, adding that she was glad the students are in an environment at World Youth Day where, “It is okay to say, ‘I love Jesus. I want to give my life to him.'”

Grace McCarthy, a senior at Georgetown Visitation, said she is looking to grow closer to God during World Youth Day, “by being open to whatever he has planned for me.”

She noted that they had already had some curveballs thrown at them during their travel to Panama, and the morale of the group has been to think, “God has a plan for us.”

“I am hoping that whatever happens, I can take the catechesis or the homilies or whatever the person next to me has to say and see it as a way of God speaking through them to me and try to take that home with me,” she said. “I think what I really want is to be able to take World Youth Day home with me and keep it there and not let it just be something that I did — have it be something that becomes a part of me.”