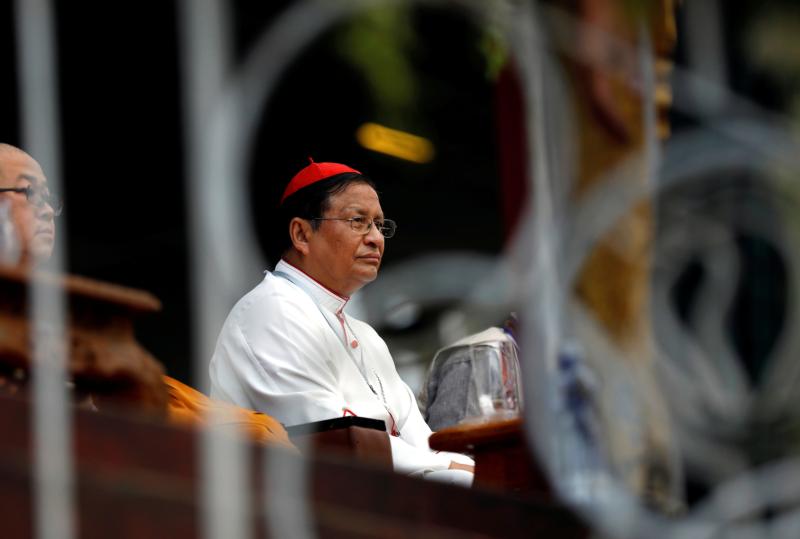 In a recent interview with Catholic News Service, Cardinal Bo said he was not certain he would be at the Vatican’s summit on protection of minors in the church Feb. 21-24, because he is not president of a national bishops’ conference; he is, however, president of the Federation of Asian Bishops’ Conferences.

But he appeared uncomfortable discussing an issue that had some publicity in the country in early January.

Msgr. Maurice Nyunt Wai, executive secretary of the Catholic Bishops’ Conference of Myanmar, said a report on the issue in Myanmar was presented during its four-day meeting in early January by Father Mariano Soe Naing, spokesman for the church during Pope Francis’ 2017 visit to the country. Father Soe Naing declined to make further comment.

In comments made to Radio Free Asia in early January, Father Soe Naing said, “Like the cases around the world, there are allegations that senior leaders in the church protected those who committed the abuse.” He added that some cases came to light many years later and “the accused had given pledges not to make the same mistakes.”

“We have experienced shortcomings in handling the issue,” he said. “There’s a lack of knowledge in Myanmar about how to address the issue.”

“Some cases were resolved using old methods, but now the Vatican has instructed us how to address the issue, and we must follow a zero tolerance policy and take action against those responsible,” he said.

“We have been instructed to draft a child protection policy like in other countries and, for Myanmar, a policy not just for children but also for vulnerable adults,” Father Soe Naing told Radio Free Asia, adding, “we now have ways to protect them.”

“In recent years, we held several workshops and gave guidelines to address such abuses among the priests as well as the nuns,” he said. “The pope himself will instruct senior church leaders around the world about maintaining a child protection policy during a four-day event that begins on Feb. 21.”

Last year, the broad issue of child rape came to the fore in Myanmar. Figures released by the Ministry of Home Affairs in February 2018 showed the number of reported rape cases reported in 2017 was 1,400, including 900 children. This compares to 1,300 in 2016, including 670 child victims. While religious institutions have been in the spotlight, it is the country’s vast network of Buddhist monasteries that also act as boarding schools in regional areas across Southeast Asia that have been found wanting.

Yet aid workers have been reported saying that official statistics do not capture the extent of the problem, as many cases go unreported. As well, child trafficking — often for sex — is emerging as a problem in the country.

“The economic disparity between Myanmar and its neighboring countries such as Thailand and China means that children are also subjected to increased risk of trafficking,” according to the Save the Children aid group in Myanmar. “Many of these trafficked children are pushed into forced marriages, while others are exposed to hazardous labor and commercial sex trade.”

During a news conference with journalists Jan. 27 on his flight to Rome from Panama, Pope Francis said the February meeting at the Vatican would address “in a clear way” what protocols bishops need to follow when handling sexual abuse. He said his international Council of Cardinals suggested the summit after realizing that some bishops did not know how to address or handle the crisis on their own.

Cardinal Bo seemed confident that the church in Myanmar, a minority faith of about 750,000 people in a nation of 54 million, would not see as many accusations of abuse as the church in some countries. For instance, neighbor India has seen a recent raft of cases, including of priests accused of abusing nuns and of pedophilia as well as sexual abuse of laywomen by priests and teaching brothers.

“Here in this culture, there have been a few cases of child abuse in the civil society and a few cases we have heard of in the past. Like same-sex marriage, we don’t really have this in the culture,” Cardinal Bo said. “When society is more open we might hear of some cases here and there — but I don’t think that it will be as common as in other places.”

“There is time for more purification in the church, so we want to present it in a positive way. So we put in a policy of zero tolerance,” he added.

“In Mandalay there was one case — about three years ago — when we had a case and the bishop took action,” he said, without offering any more details of the case, when the policy of zero tolerance was put in place, or how it would be enforced.

Officials at the bishops’ declined any further comments.