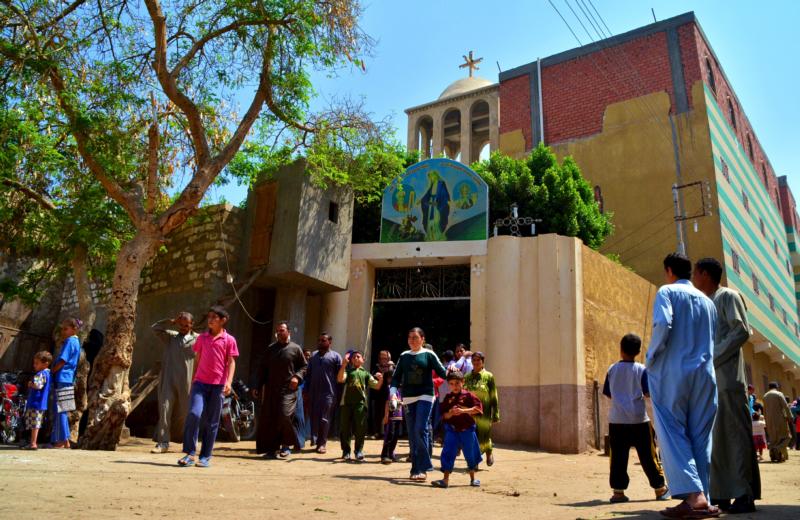 In this 2015 file photo, Christians leave Al-Galaa Church in Samalout, Egypt. The martyrs of different Christian churches throughout the Middle East are together in heaven, interceding for peace in the region and enjoying the unity for which all Christians on earth must strive, Pope Francis said Feb. 1 during a meeting with members of the International Joint Commission for Theological Dialogue between the Catholic Church and the Oriental Orthodox Churches. (CNS photo/Stringer, Reuters)

VATICAN CITY (CNS) — The martyrs of different Christian churches throughout the Middle East are together in heaven, interceding for peace in the region and enjoying the unity for which all Christians on earth must strive, Pope Francis said.

“I want to assure all the faithful in the Middle East of my closeness, my constant thoughts and my prayers that this land, unique in God’s salvific plan, may, after the long night of conflict, witness the dawn of peace,” the pope said Feb. 1 during a meeting with members of the International Joint Commission for Theological Dialogue between the Catholic Church and the Oriental Orthodox Churches.

“The Middle East must become a land of peace; it cannot continue to be a land of hostility,” the pope said before praying, “May war, the daughter of power and destitution, give way to peace, the daughter of law and justice, and may our Christian brothers and sisters be recognized as full citizens enjoying equal rights.”

The Oriental Orthodox churches trace their origins to the Christian communities that did not accept the wording of the Council of Chalcedon’s definition in 451 that Christ was fully human and fully divine. Between 1971 and 1996, the Catholic Church and the individual Oriental Orthodox churches resolved their differences over the Chalcedon statement.

Pope Francis, who often speaks of the “ecumenism of blood” in reference to the martyrdom of Christians from many churches, said they are “witnesses of unity” and “seeds of peace,” which “are now blossoming in heaven.”

The modern martyrs, he said, are “members of different churches who, united by the same suffering for the name of Jesus, now share the same glory.”

Coptic Orthodox Auxiliary Bishop Kyrillos of Los Angeles, the Oriental Orthodox co-president of the dialogue, told the pope that commission members had been discussing “the theology and practice of marriage.”

“We know how tirelessly Your Holiness has labored in the last few years to restore peace and harmony to each family,” he told the pope. “We deeply appreciate Your Holiness’ efforts to preserve and revive the Christian family in the midst of many attacks and divisions today.”

Pope Francis said he hoped the dialogue commission’s focus on the sacraments would help Catholics and Oriental Orthodox “continue the journey toward full communion, toward the shared celebration of the Holy Eucharist.”

Commenting specifically on marriage, the pope told commission members, “I like to recall what the book of Genesis says about this: ‘God created man in his own image … male and female he created them.’ Man is fully in the image of God not when he is alone, but when he lives in a stable communion of love, because God is a communion of love.”

Pope Francis said he was certain the commission’s work would benefit the entire church, “the family of God’s children, the Spouse of Christ, who we desire to present to the Lord ‘without spot or wrinkle,’ without wounds and without divisions, but in the beauty of full communion.”

NEXT: True love for God leads to compassionate care for others, pope says