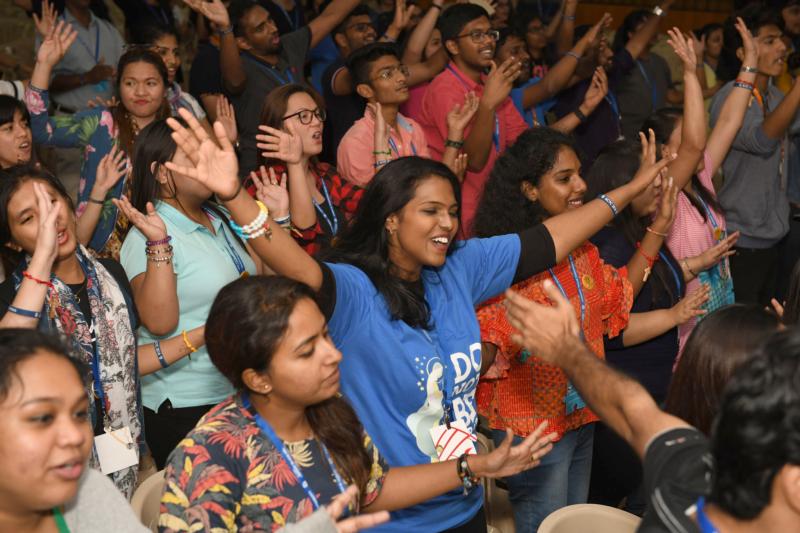 BEIRUT (CNS) — Catholics from around the world living in the United Arab Emirates are waiting with great anticipation for Pope Francis’ Feb. 3-5 visit, the first papal trip to the Arabian Peninsula.

There are eight Catholic churches throughout the seven emirates of the UAE, with a ninth church under construction. Each church offers an extensive schedule of “weekend” Masses, all of which are full. Since the UAE is an Islamic country and Friday is considered a day of prayer for Muslims, Catholics attend weekend Mass on Friday or Saturday; Sunday is a workday.

“The rulers of the UAE have been benevolent and tolerant, allowing us to practice our faith in the places of worship, and for this we are very thankful,” Father Kadukkan said.

Reflecting on the significance of Pope Francis’ visit, Joseph Khadige, a Lebanese who has been working in the UAE since 1982, told Catholic News Service that Pope Francis’ visit is “a sign from God. It is something we never thought would happen in our lifetime, for a pope to visit the UAE. The world should understand: This is not a small thing.”

Some people in the West confuse the UAE with Saudi Arabia, Khadige noted. “So, when we say that 70,000 people attend a single church, they might say ‘impossible,'” he said, in reference to the approximate number of parishioners at his parish, St. Michael’s in Sharja, an emirate close to Dubai.

On the contrary, Khadige said, “Here in the UAE, we practice our faith in full.”

From his experience, Khadige, general manager for an Italian global firm, has noticed that many Christians from the West who are lukewarm or practically atheists when they first arrive in the UAE as expatriate workers eventually are influenced by their active Christian peers.

“They see a lot of staff in their companies and organizations are going to church.” Little by little, he said, they are inspired to return to the church.

“It’s not just about the numbers. It’s about what is happening in a Muslim country,” he said.

Ed Magbag of the Philippines, a project manager with a design and engineering firm who has worked in the UAE for 14 years, notes that the UAE “is like a home away from home for all Christians.”

Parishioners of St. Joseph’s Cathedral, he and his wife are active in Couples for Christ, a global lay ecclesial movement, which has about 15,000 active members in the UAE.

Pope Francis’ visit “will show the world that despite different cultures, races, religions and practices, there is respect, love and coexistence of all local people and expatriates in the UAE,” Magbag told CNS.

Magbag considers Pope Francis’ visit to the UAE as “the best gift,” that “rekindles the fire in the heart of the faithful,” who are expecting spiritual nourishment.

Like many fellow Catholics in the UAE, the Magbags cut short their vacation to their homeland to be present in the UAE for Pope Francis’ visit.

“This is one experience we must not miss,” he said. Many workers are asking for a day of leave for the Pope’s Feb. 5 Mass at the stadium.

“Pope Francis symbolizes God’s presence on earth and so, when the Pope Francis is visiting the UAE, it is as if God is visiting his children in the Middle East, not only Christians, but our Muslim brethren as well,” Magbag added.

“Make Me a Channel of Your Peace” is the theme for this papal visit, taken from the opening words of the Prayer of Peace of St. Francis Assisi, from whom Pope Francis has taken his name. The logo of the visit is a dove bearing an olive branch.

“The UAE government has made huge strides by inviting Pope Francis to the country, and this is a step in the right direction to achieve tolerance, both within the Emirates as well as within the region,” the Indian priest told CNS.

The UAE government is organizing the visit with support from the Catholic Church.

Approximately 1 million Catholics reside in the UAE as foreign workers, according to the Apostolic Vicariate of Southern Arabia.

They come from the Middle East, Asia, Europe, Africa and the Americas, with the majority from India and the Philippines.

NEXT: Faith is passed on at home, pope tells parents at baptism