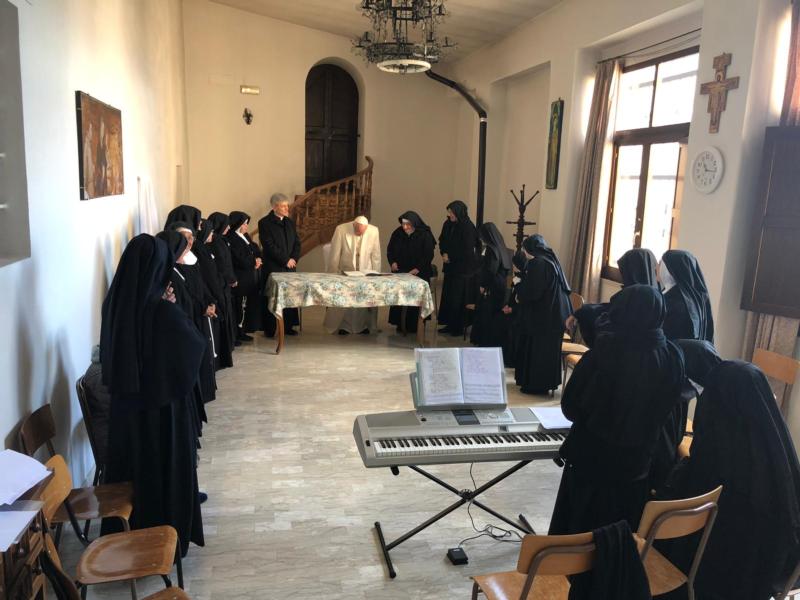 Pope Francis makes a private visit to a community of cloistered Poor Clare nuns Jan. 11. The Vatican press office said he visited the monastery of Santa Maria di Vallegloria in Spello, about 100 miles north of Rome, to encourage the sisters and to share prayer, the Eucharist and a meal with them. Also pictured is Bishop Gualtiero Sigismondi of Foligno, Italy. (CNS photo/Holy See Press Office).

The pope made the “private visit” to encourage the sisters and to share the Eucharist, prayer and a meal with them, said Alessandro Gisotti, interim director of the Vatican press office.

In some ways, Pope Francis was repaying a visit. Members of the Poor Clares of Santa Maria di Vallegloria in Spello, about 100 miles north of Rome, had visited Pope Francis in August 2016 at his Vatican residence, the Domus Sanctae Marthae.

During the 2016 meeting, the pope personally gave the Poor Clares — and symbolically all contemplative women religious — in his document “Vultum Dei Quaerere” (Seeking the Face of God), which updated rules governing contemplative communities of women.

The Spello monastery traces its roots back to 560 when it was founded by several followers of St. Benedict; the community was re-formed in 1230 by two disciples of St. Clare of Assisi.

After a major earthquake in 1997, which heavily damaged the Church of Santa Maria di Vallegloria and the monastery, the sisters maintained their cloister by living in the garden first in tents then in portable homes. The church and monastery were reopened in 2011.

NEXT: Catholics find flourishing faith life in Muslim UAE, where pope to visit