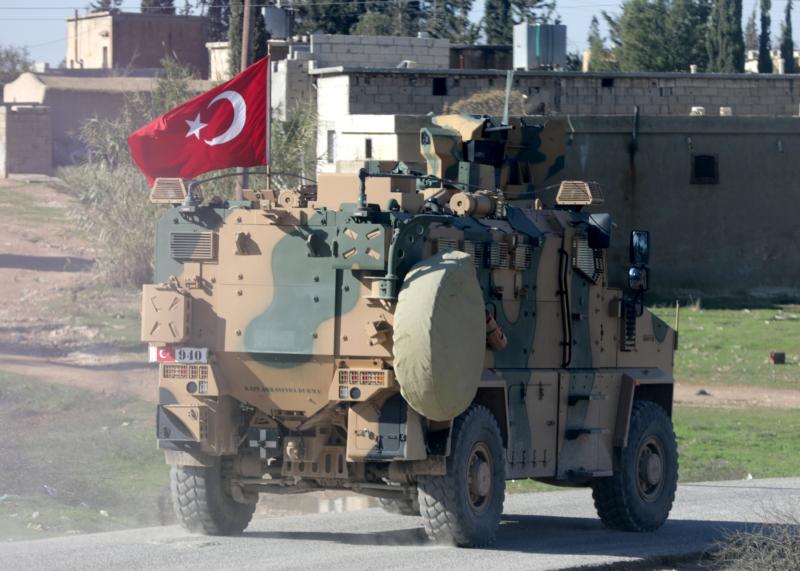 A Turkish military vehicle is seen in late December 2018 in the countryside of Manbij, Syria. (CNS photo/Khalil Ashawi, Reuters)

AMMAN, Jordan (CNS) — Growing numbers of Christians in North America and Europe are joining Christians in Syria’s northeast in expressing concern for the future of religious minorities and Kurds in that region should the U.S. give Turkey the “green light” to take over the fight against Islamic State.

“Certainly, Christians don’t want to see Turkish troops entering Syria given the past brutal history of the 1915 massacres of Christians carried out by the Turks,” Father Kanoon told CNS by phone.

“Because of the massacres, Christians were forced to escape from Turkey, and this is where they fled, to northeastern Syria and Aleppo. Turkey is viewed by many as the enemy of Christians,” he said. Qamishli is a city in northeastern Syria on the border with Turkey, close to Iraq.

“And again, Turkey now wants to interfere in Christian affairs in northern Syria and for that, it has a political agenda,” said the priest. He warned that any problems could result in more Christians fleeing northern Syria.

Meanwhile, Syriac Christian organizations in Syria, the U.S. and Europe have called for a no-fly zone over northern Syria to stop any possible Turkish attack, fearing further trouble for Christians who were endangered by Turkey’s takeover of Afrin early last year.

“We urgently need protection from Turkey’s threats to invade and “cleanse” our territory from Christianity, religious freedom, and democracy,” read the statement published Jan. 3 by the Syriac National Council of Syria, the American Syriac Union, and the European Syriac Union. The groups include Catholic and Orthodox Christians.

U.S. President Donald Trump’s decision to withdraw troops and hand over the fight to Turkey “leaves us powerless and open to be destroyed by either Turkey, or other regimes scrambling to see our demise in the vacuum this will create,” the statement said, a reference to Iran, which has supported Syrian government fighters.

Meanwhile, the Netherlands-based Free Yezidi Foundation also urged Washington to “delay withdrawal of forces for as long as possible” and to be able to conduct air attacks in Syria and Iraq.

In a statement Jan. 4, it warned that without a no-fly zone over northern Syria and U.S. troop presence to prevent a potential Turkish assault on Kurdish strongholds, “waves of refugees” from northeastern Syria will flood into Iraq.

The United Nations has described the Islamic State campaign against the Yazidis since 2014 as “genocide,” with 3,000 killed and nearly 7,000 Yazidi women and girls abducted and sexually abused.

In late 2018 and early 2019, Turkey amassed more military hardware along its border with Syria, including tanks, howitzers and armored personnel carriers. While Turkish-backed forces inside Syria, whom analysts say include al-Qaida and Islamic State fighters, have moved closer to the strategic town of Manbij. The Kurds, Christians and other religious minorities until now felt protected by the presence of U.S. ground troops.

Trump announced Dec. 19 the U.S. would pull out 2,000 American troops from Syria, saying the extremists were “defeated” and that Turkey will finish the problem. Defense Secretary Jim Mattis and senior aide Brett McGurk resigned in protest.

After much criticism of the move, U.S. National Security Adviser John R. Bolton said the U.S. troop drawdown will be conditioned on the defeat of the Islamic State and the safety of Kurdish allies.

Both Bolton and Secretary of State Mike Pompeo have warned Turkey that the planned U.S. pullout must not be seen as an opportunity to attack Syrian Kurdish forces. Syrian Kurdish and Christian fighters, allied with U.S. troops, are largely responsible for eradicating much of the Islamic State presence in Syria.

Many analysts believe Turkish President Recep Tayyip Erdogan’s real aim in wanting to take over the fight against Islamic State is rid Kurdish fighters in Syria, whom he calls terrorists.

Pope Francis has stressed that Christians must have a future in the Middle East, and on Jan. 6 he again urged authorities to ensure the security of Christians to live in their own countries as citizens in every sense of the word.

“We hope to see Syria emerge from its civil war with religious freedom and equal rights for all faiths, ethnic groups and women,” as currently evidenced in the northeast, said the International Religious Freedom Roundtable in a letter to the president. The umbrella grouping includes Law and Liberty Trust, Jubilee Campaign, the Institute on Religion and Democracy and the Netherlands-based Sallux.

“It is the best antidote to the totalitarian ideology of the Islamic State which threatens religious minorities and U.S. national security interests around the world,” the Jan.7 statement urged.

Bassam Ishak who heads the Syriac National Council of Syria, warned that Turkey supports Syrian jihadists “who want to establish Islamic sharia law in land they occupy in Syria.”

However, northeastern Syria under joint Kurdish and Christian control respects religious freedom for all its inhabitants for the first time in its recent history.

“It’s not just freedom to worship, but also the freedom to choose your religion. This means Christians can live in a religiously diverse culture and have a secure future,” said Ishak, a graduate of The Catholic University of America, Washington, who serves on the Syrian Democratic Council overseeing the self-administration region.

PREVIOUS: Life is a gift not meant to be possessed, manipulated, pope says

NEXT: Indonesian archbishop urges Catholics to ditch use of plastic bags