Churches damaged in Sicily quake, but no lives lost 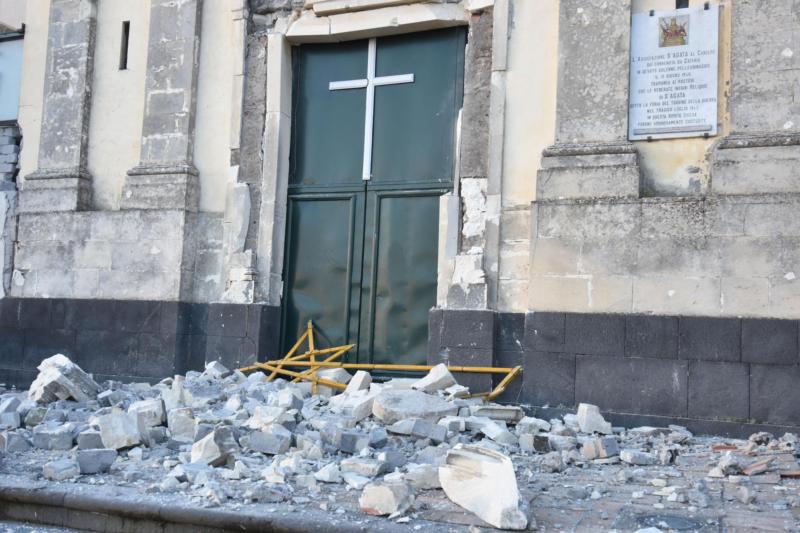 ROME (CNS) — Italy’s Mount Etna volcano began a new eruption the morning of Christmas Eve, triggering hundreds of small earthquakes and one, early Dec. 26, that damaged homes and churches nearby.

Italy’s civil protection service reported no deaths or serious injuries in the Sicilian towns surrounding the volcano, but dozens of families who fled their homes when the magnitude 4.8 quake hit just after 3 a.m. Dec. 26 were told by firefighters that the buildings were not safe to re-enter.

In the town of Pennisi, the bell tower of the Church of Blessed Mary of Carmel crashed down onto the rectory; the priest was able to get out of the house unharmed, Father Arturo Grasso, spokesman of the Diocese of Acireale, told Vatican News.

Much of the news coverage throughout Europe mentioned how the earthquake toppled an outdoor statue of St. Emygdius in Pennisi. The third-century martyr, credited with saving a central Italian town from an earthquake in the 1700s, is now invoked throughout Italy as the patron saint for earthquake protection.

The statue’s falling, Father Grasso said, “could be seen as a paradox, but we also can say that if this happened Christmas night when people were gathered in each other’s homes or in church, we would not be talking only about damage to things, but also about victims.”

In nearby Fleri, many of the buildings on the town’s main roads were damaged, including the Church of Blessed Mary of the Rosary, where chunks from the facade fell to the ground.

The Italian national institute for geophysics and volcanology said the earth in Sicily began trembling a few hours before the eruption of Mount Etna Dec. 24 and, as of Dec. 27, the quakes were continuing. The institute counted “some 1,100 earthquakes, about 60 of which were greater than a 2.5 magnitude.”

NEXT: Defuse family fights by remembering the good in the other, pope says