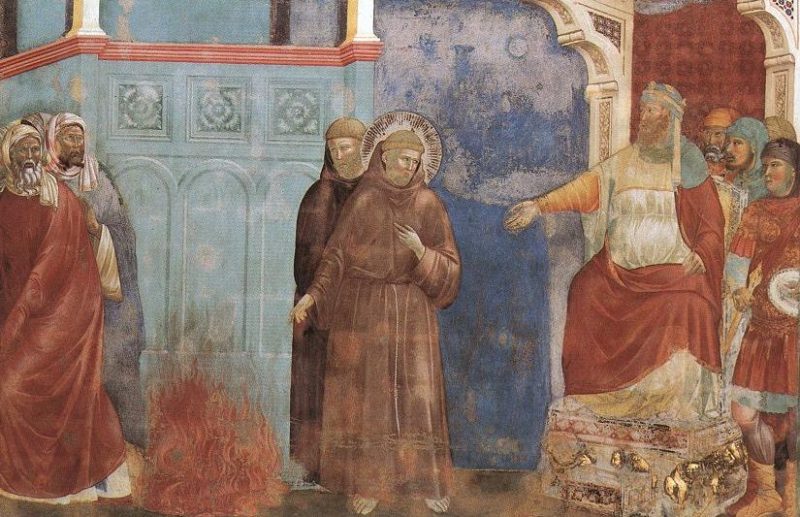 VATICAN CITY (CNS) — Pope Francis will have St. Francis of Assisi on his mind when he visits Abu Dhabi, capital of United Arab Emirates, Feb. 3-5 and Morocco in late March.

As he told ambassadors to the Holy See early in January, “These represent two important opportunities to advance interreligious dialogue and mutual understanding between the followers of both religions (Christianity and Islam) in this year that marks the 800th anniversary of the historic meeting between St. Francis of Assisi and Sultan al-Malik al-Kamil” of Egypt.

The anniversary has a special meaning in the United Arab Emirates, which along with Oman and Yemen, are served by the Apostolic Vicariate of Southern Arabia, a church jurisdiction entrusted to the Capuchin Franciscans.

Most of the 65 priests who work in the vicariate and Bishop Paul Hinder, the apostolic vicar, are Capuchins.

The order’s website — ofmcap.org — has a special page dedicated to the pope’s visit to Abu Dhabi, which begins by noting: “This year marks the 800th anniversary of the visit of St. Francis of Assisi to the sultan of Egypt.”

Father Michael A. Perry, minister general of the Franciscans, issued a long letter about the anniversary in early January, describing how St. Francis traveled to Egypt during the Crusades, arriving at “the camp of the crusading army, among Latin Christians who through years of preaching and the rhetoric of holy war had been taught to scorn Muslims. Those same Muslims had every reason to scorn Francis, assuming that he, like most in the crusader camp, was an enemy and not a bearer of peace.”

Yet, Father Perry wrote, “we today celebrate what no one at that moment could have foreseen: that a Spirit-filled man with nothing of his own crossed the battle lines unarmed to request a meeting with the sultan, was received with grace by that sultan, enjoyed an extended period of hospitality with the Muslim leader and emerged from the visit to reflect anew on the mission of the Friars Minor.”

In 2019, the minister general said, Franciscans should renew their commitment to walking “together with Muslims and people of all faiths as fellow travelers, as builders of civility, and most fundamentally, as sisters and brothers, children of Abraham, our father in faith.”

He called on all the order’s members “to celebrate this anniversary as a moment when the light of the Gospel can open one’s heart to see the ‘imago Dei’ (image of God) in a person one regards with fear and distrust, or even worse, in a person one has been urged to hate.”

“We live in a time when people of various faiths traffic on the demonization of Muslims and incite others to fear them,” Father Perry said.

Beyond just studying and praying about dialogue, he said, “I encourage followers of Francis who lack much personal exposure to Islam to recall the experience of our founder by taking a simple and concrete step: meet a Muslim. Get to know him or her, beyond the pleasantries of a cup of tea and social nicety. Try to learn and appreciate what experience of God animates him or her and allow your Muslim friend to see the love God has poured into your heart through Christ.”

Father Perry also recognized that some Franciscans live in lands where they are a minority and find themselves “caught up in political and sectarian strife and may feel the threat of violence.” But he urged them to hold firm to St. Francis’ conviction that God is patient and follows a timetable no human being could understand.

“Amid the groanings of the world for interreligious understanding,” he wrote, “may our humble, patient and merciful God show all of us the deeds and words that are most pleasing to God.”