Pope will go to Romania calling for unity, focus on the common good 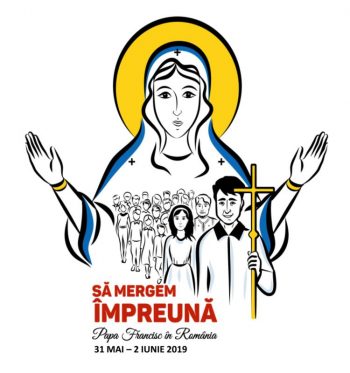 This is the logo for Pope Francis’ trip to Romania in late May to call for unity and a greater focus on the common good. The theme of the visit is “Let’s walk together” and shows Mary, the Mother of God, protecting the people of God in Romania – a country St. John Paul II visited in 1999. (CNS image/courtesy Holy See Press Office)

VATICAN CITY (CNS) — Pope Francis will make a three-day apostolic visit to Romania in late May, the Vatican announced.

Accepting invitations from President Klaus Iohannis and from Catholic leaders, the pope will visit the capital of Bucharest, the cities of Iasi and Blaj, and the Marian sanctuary in Sumuleu Ciuc in the Transylvanian region.

A detailed schedule for the trip May 31-June 2 will be released later, the Vatican said in a statement Jan. 11.

The theme of the visit is “Let’s walk together,” and the trip logo shows a group of faithful gathered together with an image of Mary behind them, representing her protection over “the people of God in Romania,” the Vatican said.

“Romania is often called the ‘garden of the Mother of God,'” a term also used by St. John Paul II during his visit there in 1999, it said.

It said Pope Francis’ visit also will have this Marian aspect as an invitation to Christians to unite their efforts “under Our Lady’s mantle of protection.”

“The Holy Father has always called for the uniting of various forces, refusing selfishness and giving central importance to the common good. The Successor of Peter is going to Romania to invite everyone to unity and to confirm them in the faith.”

The overwhelming majority — almost 82 percent — of Romania’s 20 million inhabitants say they belong to the Romanian Orthodox Church. About 6 percent of the population identifies itself as Protestant and over 4 percent identify as Catholic, belonging either to the Romanian Catholic Church — an Eastern rite — or the Latin rite.