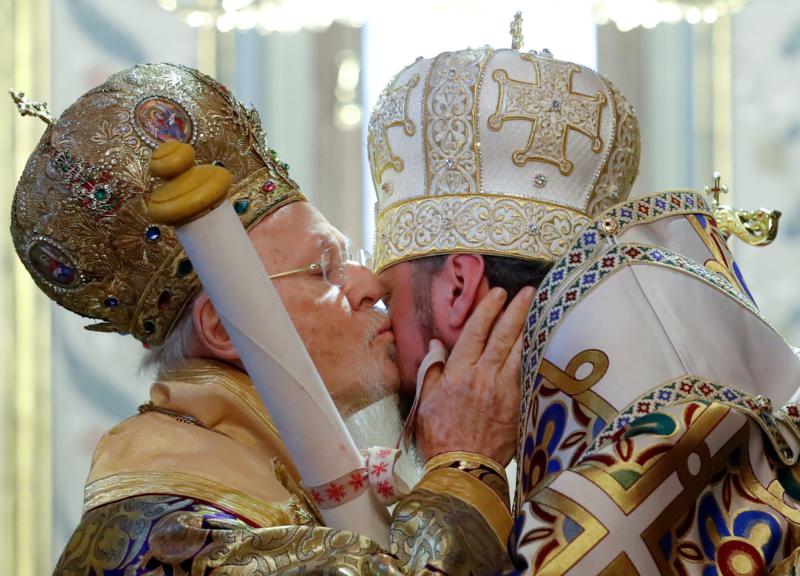 ROME (CNS) — The formal recognition of the Orthodox Church of Ukraine brings “a wind of hope” that new opportunities will be created for dialogue and concrete cooperation in the search for Christian unity, said the head of the Ukrainian Catholic Church.

Archbishop Sviatoslav Shevchuk, major archbishop of the Ukrainian Catholic Church, said he already has agreed with the Orthodox Church’s newly elected Metropolitan Epiphanius of Kiev to draw up a “road map” to examine where the two churches could work together.

The archbishop made his comments in a long interview with Glavcom, a Ukrainian news site; the Ukrainian Catholic Church’s website published the English translation of the interview Jan. 10.

Ecumenical Patriarch Bartholomew of Constantinople formally signed a “tomos” Jan. 5 recognizing the Orthodox Church of Ukraine, which was formed by members of three separate Orthodox communities, including one formally tied to the Russian Orthodox Church for more than 300 years.

Patriarch Kirill of Moscow, head of the Russian Orthodox Church, which oversaw the largest branch of Orthodox faithful in Ukraine, strongly objected to the move and announced in October that his church was breaking its eucharistic communion with Constantinople.

The Vatican has not commented on the decision to recognize the independence of the Ukrainian church, insisting it was an internal Orthodox matter.

While the independence of the Orthodox Church of Ukraine was supported strongly by the country’s government and the majority of its people, Archbishop Shevchuk said care must be taken to ensure that politicians do not use the church for their political advantage.

“The church must remain church, and state institutions and politicians must allow it to do so,” he said. “That is, politicians need to rid themselves of the temptation of instrumentalizing the church for their own interests.”

And, he said, “I hope that our Orthodox brethren are mature enough not to let themselves be used as political agitators in the upcoming elections. Otherwise, this will discredit the moral authority of the church.”

As for relations between the new Orthodox Church and the Ukrainian Catholic Church, Archbishop Shevchuk said the ultimate goal must be to fulfill Jesus’ desire that his followers be one.

Locally, he said, that requires cooperation for “the good of the Ukrainian people, in the name of truth, in the name of seeking universal unity with Christians, which we call the ecumenical movement.”

Eastern Catholics, including the Ukrainian Catholic Church, and Orthodox share a common history, a common Byzantine liturgy and a common spirituality, he said, so “the convergence of Orthodoxy and the Catholic Church” is a goal pursued through the ecumenical dialogue on a national and universal level.

Full unity among all Christians in Ukraine “will be possible when the ecumenical process is crowned at the universal level by the restoration of eucharistic communion between Rome and Constantinople. This is not utopian thinking, as some people call it,” the archbishop said.

The official Catholic-Orthodox dialogue, he said, currently is looking at the relationship between the Catholic exercise of primacy by the pope as bishop of Rome and the synodal organization of the Orthodox churches. Archbishop Shevchuk described the discussion as being “like digging a tunnel from two different sides, waiting for the two sides to meet each other.”

PREVIOUS: Pope will go to Romania calling for unity, focus on the common good