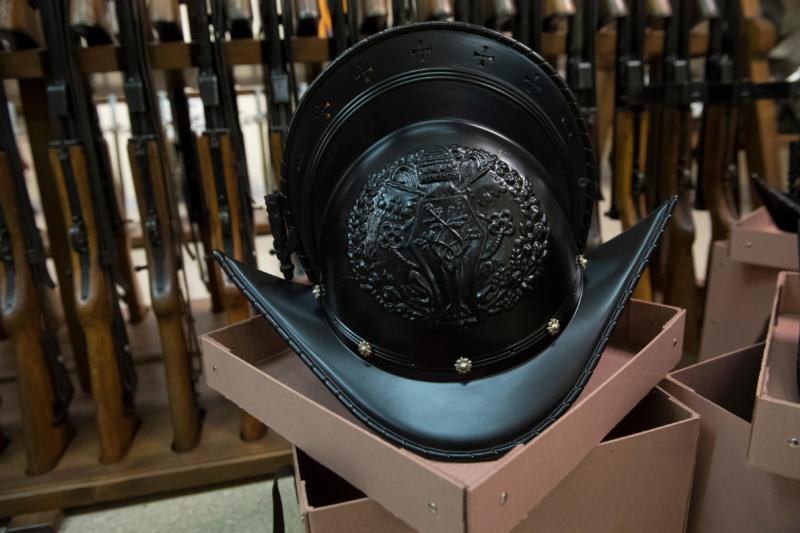 The Swiss Guard have starting using helmets made with a 3D printer and tough, weather-resistant ASA thermoplastic. The cooler, more lightweight headgear is crafted in the “morion” style of the Renaissance. The new ceremonial helmets were used by the 110 Swiss soldiers for the first time Jan. 22, 2019, during a special ceremony commemorating the 513th anniversary of their foundation by Pope Julius II. (CNS photo/Vatican Media)

VATICAN CITY (CNS) — While the Swiss Guard’s halberds and uniforms have remained largely unchanged over the centuries, its ceremonial helmets are now a product of 21st-century technology.

The four-pound, hand-forged metal helmet has been replaced with new lightweight headgear. Still crafted in the “morion” style of the Renaissance and topped with a fluffy red or white ostrich feather, it is now made using a 3D printer and tough, weather-resistant ASA thermoplastic — the same material often used for automotive exterior parts.

The Swiss Guards used the new helmets during a special ceremony Jan. 22 at the Vatican commemorating the 513th anniversary of their foundation. Pope Julius II requested a contingent of Swiss soldiers to protect the pope and his palace in 1505 and the first Swiss soldiers arrived at the gates of Rome Jan. 22, 1506.

The Swiss Guard — made up of 110 soldiers — is the smallest and oldest military corps in the world. The men guard all entrances into Vatican City State as well as keep watch over the pope and his residence, the Domus Sanctae Marthae.

They also provide security and ceremonial services during liturgical events and visits of heads of state and other dignitaries to the Vatican. A behind-the-scenes look at their ceremonial and honor duties was featured in a new video Jan. 22 as part of an ongoing series about the life and work of the guard. The series can be found on their YouTube channel “Guardia Svizzera Pontificia GSP.”

NEXT: Venezuelan bishops say fresh calls for protest are ‘sign of hope’