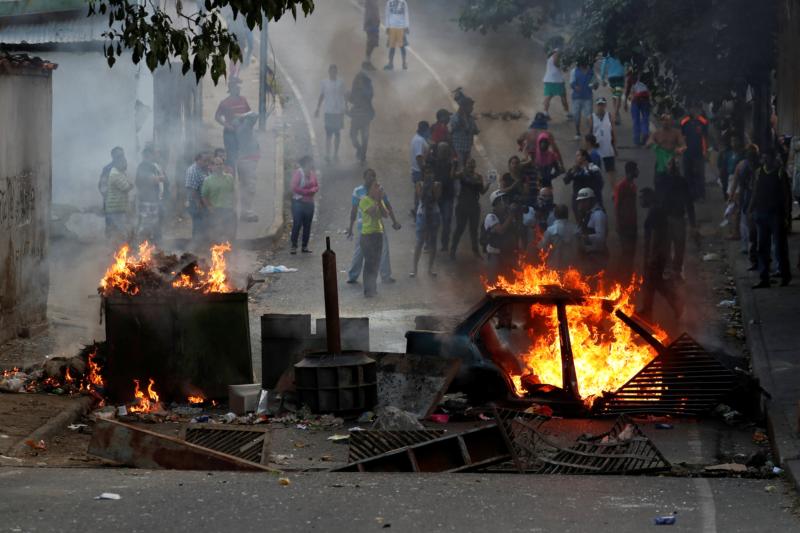 Demonstrators stand behind a burning barricade Jan. 21, 2019, during clashes with Venezuelan National Guards close to one of their outposts in Caracas. The Venezuelan bishops’ conference labeled fresh calls for anti-government street protests as “a sign of hope” in the country, which continues to suffer through a deep economic and humanitarian crisis. (CNS photo/Carlos Garcia Rawlins, Reuters)

CARACAS, Venezuela (CNS) — The Venezuelan bishops’ conference labeled fresh calls for anti-government street protests as “a sign of hope” in the country, which continues to suffer through a deep economic and humanitarian crisis.

“Something new is starting in our country: necessary changes towards the integral human development of everyone, while always respecting democracy and the national constitution,” the bishops wrote in a statement released Jan. 22.

The country’s opposition has called for mass demonstrations Jan 23 against newly sworn in incumbent President Nicolas Maduro. The opposition-controlled legislature and around 60 countries have promised not to recognize Maduro in his new term, which began on Jan. 10. Opponents called Maduro’s May 2018 re-election a sham.

“The church sees tomorrow as the beginning of hope for change,” Auxiliary Bishop Jose “Trino” Fernandez Angulo of Caracas told Catholic News Service Jan. 22, ahead of the protests. “A change is necessary here given the crisis, which is seen in hospitals and with families that don’t have enough foods or medicines, and in every corner of the country.”

Since Maduro’s inauguration, the country’s opposition has organized dozens of outdoor, town-hall style meetings in communities around the country as a way of encouraging participation in the demonstrations and listening to citizens’ problems. The success of the meetings appears to have united the opposition, which had remained disorganized and fractured after Maduro successfully sidelined the legislature in 2017.

In the statement, the bishops said the meetings have “allowed citizens to express themselves openly.”

“The population has showed its generalized discontent, considering the new term illegitimate,” it read.

On Jan. 11, Guaido announced he was “willing” to assume the presidency should he receive the backing of the people and the armed forces.

The bishops warned that “all of the weight of the responsibilities to come shouldn’t be put on only one person or one institution,” in what appeared to be a reference to 35-year-old Guaido.

“We believe that the assembly is doing what is right to restore democratic order,” Bishop Fernandez said. “But it’s up to us all as a nation to face the difficulties ahead.”

Opposition leaders have deliberately scheduled the protest for Jan. 23, a historically significant day in the country when a coup ousted military dictator Marcos Perez Jimenez in 1958.

“Today, we find ourselves with another January 23, 61 years after that event that was so significant in the fight for civility over barbarity,” the bishops’ statement read.

Ahead of the planned demonstrations, local media reported dozens of barricades and protests in Caracas. Authorities put down what they called an uprising of low-level military members at a barracks in western Caracas on Jan. 21, arresting 25 National Guardsmen.