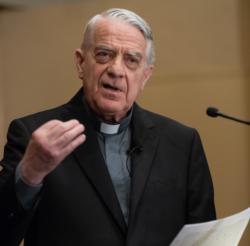 VATICAN CITY (CNS) — Only about half of the national bishops’ conferences in the world have adopted complete, Vatican-approved guidelines for handling accusations of clerical sexual abuse and promoting child protection, said the Jesuit named to moderate the Vatican’s February summit on abuse.

Jesuit Father Federico Lombardi said about one-quarter of the bishops’ conferences have received feedback on their proposed guidelines from the Congregation for the Doctrine of the Faith and are working on the final versions. That leaves 25 percent of conferences “behind for various reasons, among which are different cultural contexts and a scarcity of available competence.”

The doctrinal congregation in 2011 had asked every bishops’ conference in the world to develop guidelines for handling accusations of abuse and to submit them for approval by mid-2012.

Writing for the Jan. 19 edition of La Civilta Cattolica, the Jesuit journal reviewed by the Vatican before publication, Father Lombardi said the February meeting would be an important occasion for bishops to share best practices and to assist conferences that, because of a lack of funds or expertise, have not launched protection and prevention programs.

Pope Francis appointed Father Lombardi to serve as moderator of the general sessions of the meeting Feb. 21-24 of the presidents of the world’s bishops’ conferences, the heads of the Eastern Catholic churches and representatives of the leadership groups of men’s and women’s religious orders to address the abuse crisis.

“In the universal Catholic Church, there exists a great richness of experiences, ideas and programs that not only demonstrate the awareness of the reality of sexual abuse, its seriousness and complexity, but also what can and must be done to face it and how to face it,” Father Lombardi wrote in the article.

Father Lombardi, who served as head of the Vatican press office from 2006 to 2016 and is president of the board of directors of the Joseph Ratzinger-Benedict XVI Foundation, already had written about the February meeting in an article for La Civilta Cattolica in December.

In that piece, he called for an end of attitudes that presume clerical sexual abuse is a problem only in some countries.

“If the issue is not fully confronted in all of its various dimensions, the church will continue to find itself facing one crisis after another, the credibility of (the church) and all of her priests will remain seriously wounded” and the church’s ability to proclaim the Gospel will suffer, he had written.

In the January article, he used the Canadian bishops’ conference’s 2018 “Protecting Minors from Sexual Abuse” as an example of a document — born of years of experience and suffering — that goes beyond simple procedures to be followed and addresses what the entire church community must do to minister to victims, promote justice and protect children in the future.

The fact that the Canadian and many other bishops’ conferences and dioceses have taken seriously the commitment to protecting children and assisting survivors means “an attitude of confusion and fear is not justified,” Father Lombardi wrote. “Rather, we must make a firm commitment, with decisiveness and radicality, to the positive attitudes of responsibility, accountability and transparency.”

PREVIOUS: Tolerance-plus: Pope in Abu Dhabi will build on relations with Muslims