Tolerance-plus: Pope in Abu Dhabi will build on relations with Muslims 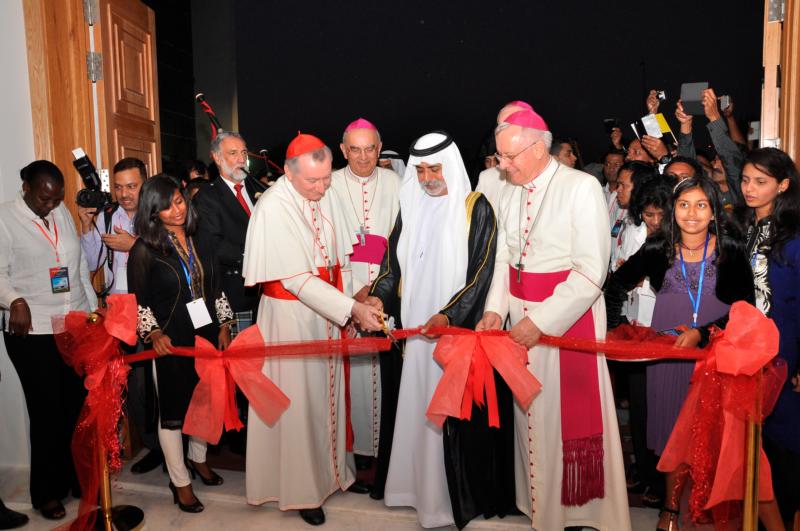 VATICAN CITY (CNS) — When Pope Francis visits Abu Dhabi Feb. 3-5, he will visit a land where interreligious tolerance is mandated by law; while Catholics in the United Arab Emirates count their blessings for that, the pope is expected to nudge for something more.

Tolerance is praiseworthy, and Catholics in the Emirates do not take it for granted. But for Pope Francis, the next step — and often a big one — is mutual knowledge, respect and cooperation.

As the pope said in Bangladesh in late 2017, “respect and shaping a culture of encounter, dialogue and cooperation in the service of our human family” requires “more than mere tolerance. It challenges us to reach out to others in mutual trust and understanding, and so to build a unity that sees diversity not as a threat, but as a potential source of enrichment and growth.”

The Apostolic Vicariate of Southern Arabia cares for the almost 1 million Catholics living in the Emirates, Oman and Yemen. The faithful belong to 16 parishes — with Mass offered in a dozen languages in churches, chapels and meeting rooms, sometimes simultaneously.

In the United Arab Emirates, a federation of seven emirates on the southeast edge of the Arabian Peninsula, the ruling families have donated land for Catholic and other Christian churches. But no bells call the faithful to prayer and no crosses can be visible from the street.

Islam is the state religion and the faith of almost all of its citizens. But citizens account for less than 20 percent of the Emirates’ population; most of the rest are foreign workers from almost every country in the world and include significant numbers of Catholics from India and the Philippines.

“We have experienced great benevolence from the leaders of the Emirates to be able to worship in the churches that have been built on land generously donated by them,” said Bishop Paul Hinder, head of the apostolic vicariate. “These gestures and the continuous efforts by the state to create an environment of tolerance and harmony in the community are very encouraging.”

The Catholic parishes run busy Rite of Christian Initiation of Adults programs, but only for foreigners. “Most of our RCIA candidates come from other Christian denominations or did not have a life in faith at all. Some are Hindu,” said Marcus Khoury, who assists with the program at St. Joseph’s Cathedral in Abu Dhabi.

Bringing adults into the Catholic faith is “a delicate matter where we have to be careful at all times,” Khoury said. “We are not allowed to proselytize among Muslims, and therefore have to make sure that our RCIA candidates were not originally Muslim.”

For Khoury, who worked for a year in neighboring Saudi Arabia, where Christianity can be practiced only in private homes, “Abu Dhabi is fortunately very open and relaxed when it comes to practicing other religions.”

Khoury works as in-house legal counsel specializing in construction and arbitration law. Many Muslims, he said, know just by his name that he is Christian, or at least from a Christian family. But “my Muslim co-workers rarely talk about religion with me. To a certain extent it still is a touchy subject, as one may risk being misunderstood as proselytizing and trying to convert Muslims when talking to them about Christianity.”

At work and at school, Bishop Hinder said, Catholics interact with their Muslim sisters and brothers and people of other faiths, so friendships are formed and cultures shared.

But the visit of the pope, which will include “the first ever public Mass in the country,” will bring even more attention to the Catholic community, the bishop said, so Catholics want “to put our best foot forward to shine during this time.”

Feras Hamza is a Dubai-based professor and Islamic historian who has participated in high-level Christian-Muslim dialogue programs. He told Catholic News Service, “The lived reality of day-to-day interaction, co-existence and social exchange — economic, cultural or otherwise — is itself a form of continuous dialogue” and one that best describes “the state of Christian-Muslim relations in the UAE.”

“Christians and Muslims in the UAE do not need to discuss their scriptures to demonstrate ‘dialogue,'” he said. “‘Religion’ cannot be singled out from what anthropologists would call ‘culture,'” and people’s “values may be anchored in and shaped by religious traditions, but they ultimately have life and meaning only in communal exchange and in the everyday.”

A sign of how seriously the UAE takes tolerance, he said, is the appointment of a Cabinet “minister of state for tolerance” and the proclamation by Sheik Khalifa bin Zayed, the UAE president, of 2019 as the “Year of Tolerance.”

In addition to focusing on dialogue with his Muslim hosts, Pope Francis will devote time to the international community of Catholics living in the Emirates. Those Catholics include lawyers like Khoury and financiers, doctors, nurses, teachers and tens of thousands of maids and construction workers.

For many of the domestic and blue-collar workers, a job in the Emirates is a great opportunity to work and send money home to their families. But policing their working conditions has not been easy; the government continues to enact protections, such as making it illegal for an employer to confiscate the worker’s passport, regulating the fees employers can withhold from paychecks, mandating a maximum 12-hour work day for domestics and guaranteeing one day off each week.

The Catholic parishes are one of the few places in the Emirates where foreign workers of all countries and categories come together.

Khoury, the lawyer, said his French-language community at St. Joseph’s includes people from France, Belgium, Lebanon, Iraq, Cameroon and Egypt. It lets him “break through the otherwise typical expat bubble in which expatriates-foreigners largely stick to their own nationality and social class.”

Many of the migrants are unmarried. Bishop Hinder said that through their involvement in parish communities “they end up becoming each other’s support system for spiritual growth and in personal relations.”

And while the government has made strides in protecting workers, “there are sometimes unfortunate situations where migrant workers find themselves in dire straits if companies close down or salaries are not paid,” the bishop said. “All parishes have set up community-service initiatives to help in this type of case,” with volunteers providing legal assistance, parishioners collecting food and clothing and sponsors coming forward to pay for a stranded worker’s plane ticket back home.

As guests in a foreign land, Bishop Hinder said, Catholics know their actions speak louder than words, and “living in peace and harmony becomes a natural priority.”

“We do not take anything for granted,” the bishop said, “but we are thankful to the Lord for his grace in being able to live and share our faith in the communities we live in.”