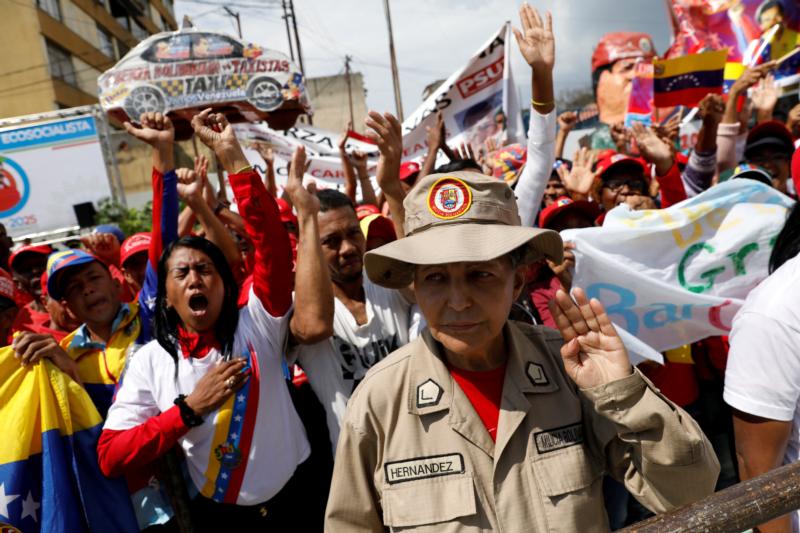 Supporters of Venezuelan President Nicolas Maduro are seen in Caracas, Venezuela, Jan. 10 during his swearing-in ceremony. The Venezuelan bishops’ conference has labeled his new government “illegitimate” and called for a “change in government.” (CNS photo/Manaure Quintero, Reuters)

CARACAS, Venezuela (CNS) — The Venezuelan bishops’ conference has labeled the new government of Nicolas Maduro “illegitimate” and called for a “change in government.”

The president was inaugurated for a second term Jan. 10, despite dozens of countries around the world promising not to recognize his new term, calling his May re-election a sham.

“We are living in a de facto regime,” read a nine-point statement from the bishops released Jan. 9. “The attempt to begin a new presidential term on Jan. 10, 2019, is illegitimate in its origins, and it opens the door for the nonrecognition of the government.”

Maduro’s new term has plunged the South American country even deeper into a constitutional crisis, with some voices internationally and in the local opposition urging the president of the country’s opposition-controlled legislature to assume the presidency as a parallel government. On Jan. 13 state intelligence officials briefly detained the legislature’s president, Juan Guaido, after the lawmaker announced a day prior he was “willing” to assume the presidency.

Speaking with Catholic News Service Jan. 12, Auxiliary Bishop Jose “Trino” Fernandez Angulo of Caracas, conference general-secretary, said the bishops believe whether Guaido should be sworn in as president “was open to the interpretation of the law.”

“Ultimately, we’re promoting a peaceful solution and the necessary changes that allow for a reorganization as we’ve never seen before in this country,” he said.

But as the bishops note in their statement, a legal resolution to the standoff could prove elusive since the current political scenario is not considered in the country’s constitution. Maduro has insisted that he was re-elected in free and fair elections even though most of his opposition boycotted the vote after the government disqualified its strongest candidates.

“It’s difficult to speak of a transition government, since that figure doesn’t exist in the constitution,” Bishop Mario Moronto Rodriguez of San Cristobal de Venezuela, first vice president of the bishops’ conference, told Vatican News after releasing the statement. “But it can be done through a body, that is the only valid and legally accepted body, which is the National Assembly.”

Along with its political debacle, Venezuela continues to suffer through an economic and humanitarian crisis, with some predicting inflation to reach 10 million percent this year. More than 3 million people have fled in recent years, according to U.N. figures. Most Venezuelans are losing weight, unable to afford enough food.

Given the disaster the government must look to restore “plurality” and “peaceful coexistence” in the country, said Bishop Fernandez.

“And we can’t just be spectators given what is happening,” he said. “We want to be faithful to the mandate given to us by the church by helping the most needy and the poorest.”

“St. Oscar Romero taught that the church doesn’t create the conflicts, as if the church is part of the opposition, but it’s that the conflict already exists between the government and people,” said Bishop Fernandez.

Given the harsh denunciation from the Venezuelan bishops, some expressed confusion when a Vatican representative attended Maduro’s inauguration. The bishops have frequently used sharp language and directly confronted the Maduro government, while language from Pope Francis has focused on promoting dialogue among all political sides.

“We’re not in any way contradicting Pope Francis,” Bishop Fernandez said. “He is someone who is driving momentum in the region, and sometimes when there are human interests, some look to discredit. But we are united with the pope.”

Alessandro Gisotti, interim director of the Vatican press office, said Jan. 14: “The Holy See maintains diplomatic relations with Venezuela. Its diplomatic activity has as its goals the promotion of the common good, safeguarding peace and guaranteeing respect for human dignity. For this reason, the Holy See decided to be represented at the president’s inauguration ceremony by the interim charge d’affaires of the apostolic nunciature in Caracas. The Holy See and the country’s bishops continue to work together to assist the Venezuelan people, who suffer the humanitarian and social implications of the serious situation the nation is in.”