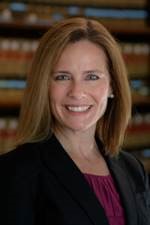 The event that is free and open to the public will be held in the Laurence E. Hirsch ’71 Classroom (Room 101) of the university’s Charles Widger School of Law, 299 North Spring Mill Road, Villanova. It is sponsored by the university’s Eleanor H. McCullen Center for Law, Religion and Public Policy.

Barrett will speak on “Constitutional Originalism and Continuity” in her lecture.

After a now famous hearing before the U.S. Senate Judicial Committee in which her Catholic faith was called into question as a qualification for serving on the federal bench, Barrett was confirmed to the U.S. Court of Appeals for the Seventh Circuit in November 2017.

Previously she served on the faculty of the University of Notre Dame Law School, where she continues to teach.

Barrett earned her law degree from Notre Dame, where she was a Kiley Fellow, earned the Hoynes Prize — the law school’s highest honor — and served as executive editor of the Notre Dame Law Review.

She clerked for Judge Laurence H. Silberman of the U.S. Court of Appeals for the D.C. Circuit and for Associate Justice Antonin Scalia of the U.S. Supreme Court.

As an associate at Miller, Cassidy, Larroca & Lewin in Washington, D.C., she litigated constitutional, criminal and commercial cases in both trial and appellate courts. From 2010-2016, she served by appointment of the chief justice on the Advisory Committee for the Federal Rules of Appellate Procedure.

Judge Barrett has published widely in the areas of federal courts, constitutional law and statutory interpretation. Her scholarship in these fields has been published in leading journals, including the Columbia Law Review, Virginia Law Review and Texas Law Review.