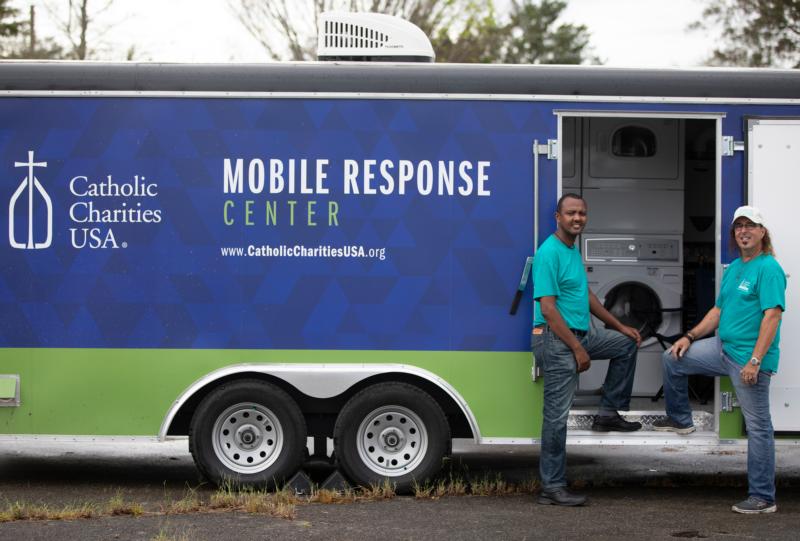 WASHINGTON (CNS) — Two top Catholic Charities USA leaders outlined some of the short-term and long-term goals for the organization and its affiliates throughout the country Feb. 3 during the Catholic Social Ministry Gathering in Washington.

Catholic Charities is in the midst of a five-year strategic plan to more sharply identify areas where it believes it can make a difference, said Brian Corbin, executive vice president of member services.

One of those areas is refugee resettlement and immigration policy. Corbin said it has worked with Migration and Refugees Services of the U.S. Conference of Catholic Bishops to place 16,000 refugees across the country in collaboration with local Catholic Charities affiliates that have located sponsor families to help resettle those refugees.

It also has partnered with the Catholic Legal Immigration Network, Corbin said, on issues surrounding the continued migration of Latin Americans to the United States.

Affordable housing is another of Catholic Charities USA’s strategic priorities. “In your own town, you probably know there are housing issues,” Corbin said.

“Catholic Charities as an institution is the largest nonpublic provider of housing after the government. We are there. We will continue to be there,” he said to applause. Catholic Charities’ commitment extends to shelters, domestic-violence shelters, transitional housing and permanent housing, he said.

Health care is a key priority for Catholic Charities, according to Corbin. “Forty percent of health care is about biology and genetics,” he said. “Sixty percent is social determinants — what happens when you leave the hospital.” The question, he said, is “How do we help people stay out of acute-care need?”

He told the story of one man who had been largely homeless. “In one year he had 62 ER (emergency room) visits. Sixty-two!” Corbin said. That man was placed in transitional housing furnished by Catholic Charities, he added, “and you know how many ER visits he had the next year? One.” That alone saved the hospital $5 million in emergency room costs, Corbin said.

Lucas Swanepoel, Catholic Charities USA’s vice president for social policy, cautioned against complacency setting in due to what he called a “booming” economy.

“Forty percent can’t cover a $400 emergency expense,” Swanepoel said, “Thirty-five percent have nothing saved for retirement. Seventy-eight percent say they live paycheck to paycheck. And there are zero places — zero — where a minimum-wage worker can afford a two-bedroom apartment.”

He added, “Having a car that needs repair is enough to drive a family into poverty today.”

As the economy changes, Swanepoel said, the people who seek assistance from Catholic Charities changes. More than half make their first visit, he added, “because they’re hungry.”

In the early part of 2019, those making their first visit seeking such help were more likely than not to be federal government employees who had been furloughed due to the five-week government shutdown, according to Swanepoel. And these were “people with dream middle-class jobs,” he said.

The furloughed-employee phenomenon was not the first time Catholic Charities had to react to federal policy, just the latest. “We also saw it with the family separation last summer,” Swanepoel said. “We have a government policy that leads to dramatic consequences.”

Catholic Charities “stepped into the fray with the help of the (Catholic) bishops’ conference,” he added. “We took on that cost ourselves.”

He cautioned, “Even when we think things are going well, it’s those people left behind that we have to remember.”

Catholic Charities USA, which has 166 diocesan affiliates, was one of several Catholic organizations co-sponsoring the Feb. 2-5 Catholic Social Ministry Gathering.

The annual gathering is organized by the USCCB’s Department of Justice, Peace and Human Development in collaboration with seven other USCCB departments and 15 national Catholic organizations.

The event brings together hundreds of Catholic social ministry leaders in the U.S. to address to current domestic and global challenges relating to poverty, war, injustice and the promotion of human life and dignity.

PREVIOUS: ‘What I do is no different than what you do,’ says award-winning nun

NEXT: To end racism tomorrow, confront the past today, panelist says