To end racism tomorrow, confront the past today, panelist says 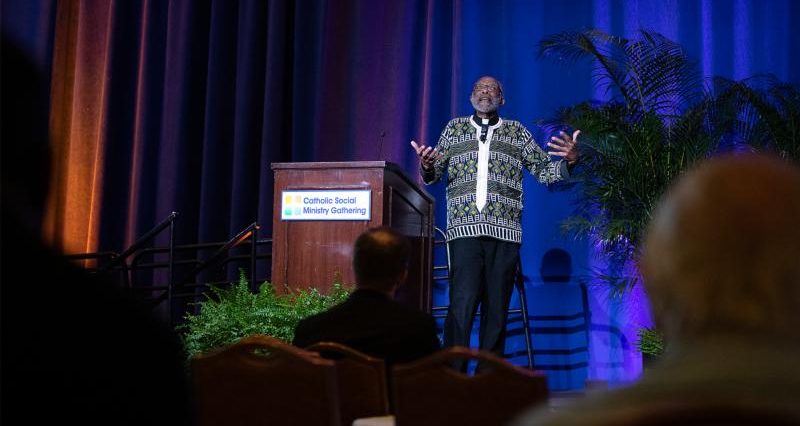 WASHINGTON (CNS) — Racism can be ended in the United States, but the past has to be confronted first for that to happen, said a Harvard professor and author who participated in a panel discussion on racism Feb. 3 as part of the Catholic Social Ministry Gathering in Washington.

“Our current circumstances are shaped by our past circumstances,” said Elizbeth Hinton, author of “From the War on Poverty to the War on Crime: The Making of Mass Incarceration in America.” “Reconciling from racism won’t be possible until we confront our past.”

The panel was an outgrowth of the U.S. bishops’ pastoral letter against racism issued in November, “Open Wide Our Hearts: The Enduring Call to Love.”

Father Maurice Henry Sands, executive director of the Black and Indian Mission Office in Washington and a self-described “FBI — Full-Blooded Indian.” He is a member of the Ojibway, Ottawa and Potawatomi tribes, who are known together as Anishnaabe.

But Father Sands’ voiced cracked frequently when he earlier laid out a litany of injustices that had been committed against American Indians, some of them to his own grandparents: “Genocide, mass murder, annihilation, elimination, termination, removal, relocation, assimilation, integration, and the best one of all, Americanization. We are the first Americans and for some reason the U.S. government thinks we needed to be Americanized.”

Elena Segura, senior coordinator for immigration for the Archdiocese of Chicago, said she learned how to bear personal burdens: first, when her daughter was born with Down syndrome, and later, when she learned her now ex-husband was gay. “God gave me the power to forgive” him, she said. “It was painful.”

Segura said, “The image I have of the undocumented community is that of a battered woman.” After repeated insults and assaults, she added, “it is better to be numb” in order to carry on.

“You would be surprised how many times we tried to schedule festivals for our saints and they would say no: ‘We don’t want those things in our community. You’re too divisive,'” said a fourth panelist, Father Patrick Longalong, a Filipino-American priest, a pastor in the Diocese of Brooklyn, New York, and the diocesan coordinator of ministry to Filipino immigrants.

“It’s not about the language, right?” Father Longalong said. “It’s about our contributions in the parish and in the community.”

“The Gospel of Jesus Christ is what changed my life. It changed my parents’ lives. And it’s what we need today,” Father Sands said. But it will be a hard sell for Catholics, he warned, because of their history with the “Indian schools” that took children from their homes and sent them hundreds of miles away for schooling.

Hinton, some of whose family members were incarcerated, said she was too scared to step inside a prison to visit until she was in her 20s. She cited statistics from the Vera Institute for Justice to show how disproportionately African-Americans are treated in the justice system.

“African-Americans are 12 percent of the U.S. population, 16 percent of all drug users,” she said, but they are “arrested at the same number as white Americans. Black people are locked up for drug offenses at double the rate of white people,” Hinton said. “How did this happen in the ‘land of the free’?”

“People deserve second chances,” Hinton said, “as the pastoral letter tells us — even to those people who have made mistakes and people haven’t shared the gift of love to others.”

Segura told the tale of a hard-hearted county sheriff in the Archdiocese of Chicago who had acquired more police officers, police vehicles and a fresh batch of blank tickets to issue citations among the county’s Hispanic population.

“It was difficult for me to pray for this sheriff,” Segura admitted. But she learned six years ago that the sheriff “had a conversion experience. He decided to have his own immersion experience in his own jail — and (was) reading the Scriptures and going to the Justice for Immigrants website.”

She believes it was a result of this that the sheriff pushed Illinois lawmakers to pass a law that allowed immigrants in the country withour documents to obtain temporary driver’s licenses. After that, she added, “he went to workshops to tell them how to avoid traffic tickets.”

Segura said, “When President (Donald) Trump was elected, we prayed for him since we had previously seen change and conversion.” That change may not have shown yet. “Sometimes I have only one drop of grace (to offer),” she added. “But that is enough.”