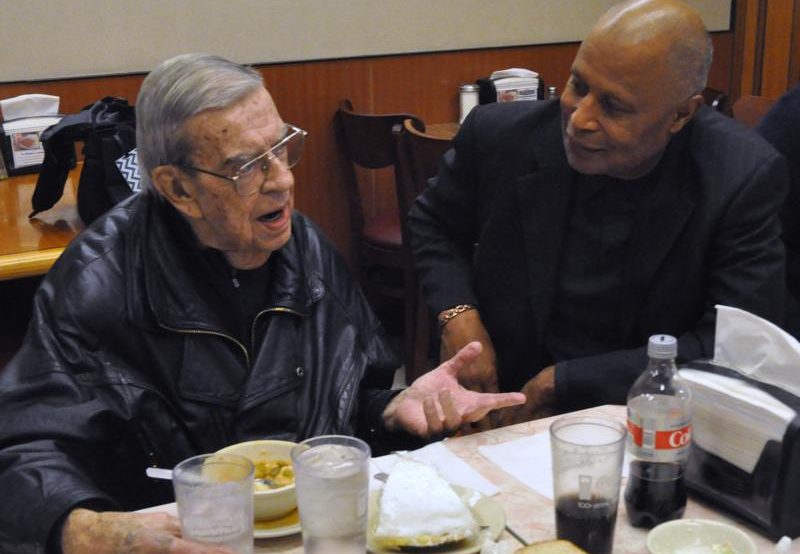 John Welch and David Shaheed share a conversation during lunch at Shapiro’s Delicatessen in Indianapolis Jan. 11, 2019. In 1997, Welch, a longtime member of St. Joan of Arc Parish in Indianapolis and the Catholic lay movement Focolare, started sharing lunch with members of the Nur-Allah Islamic Center in Indianapolis, including Shaheed. Over the years, the lunch has grown to include other Focolare members and Protestant clergy. (CNS photo/Sean Gallagher, The Criterion)

INDIANAPOLIS (CNS) — The openness to people of other faiths that Pope Francis modeled during his Feb. 3-5 visit to the United Arab Emirates has been embraced for more than 20 years at a weekly lunch shared by Muslims, Catholics and other Christians at Shapiro’s Delicatessen in Indianapolis.

John Welch, a longtime member of St. Joan of Arc Parish in Indianapolis, helped start the lunch meetings in 1997.

“It’s the presence of Jesus in our midst,” Welch told The Criterion, newspaper of the Archdiocese of Indianapolis.

Over the years, Welch and those sharing lunch and their lives together at Shapiro’s have included members of the Italy-based Catholic lay movement Focolare, members of the Nur-Allah Islamic Center in Indianapolis, as well as Protestant clergy in the city.

Welch, 84, was honored at a recent lunch by those in attendance as he prepared to move with his wife, Mary, to Chicago to live closer to family.

He was inspired to reach out to Muslims in the Indianapolis community through his involvement in Focolare, which emphasizes building unity among people based on sharing the love of God with them.

Welch said that the members of Focolare, who are known as “Focolarini,” are called to embody in their daily lives Jesus’ teaching to love others as he loved them.

“Our vocation is that, when Jesus said, ‘Whenever two or more are united in my name’ — which means his commandment to love one another — ‘there am I present in their midst,'” Welch said. “So whether we’re a father (of a family), or a Protestant pastor, an imam, the vocation is to live such mutual love … that Jesus dwells in our midst.

“If people are touched by their exposure to us, it’s not us. It’s the presence of God in our midst that attracts them,” he added.

Michael Saahir, who is leader, or imam, of Nur-Allah, has been attracted to the principles of Focolare for decades, having met with Chiara Lubich, its founder, on various occasions before her death in 2008. He also has visited the Vatican eight times to participate in interreligious dialogue events.

After the recent gathering at the deli, Saahir spoke to The Criterion about the influence of Focolare and the lunches he has shared with Welch and others in his Muslim faith.

Many in the United States didn’t like Muslims after the terrorist attacks of 9/11. Nur-Allah received bomb threats in the days following. But Welch and other Focolarini in Indianapolis wanted to show solidarity with the Muslims of Nur-Allah by attending their Friday prayer service, known in Arabic as Jumu’ah, a few days later.

“On Sept. 14, 2001, they put into practice what they’d been preaching,” Saahir said. “It was real. It wasn’t a conversation. It was a demonstration. You saw people put themselves where they didn’t have to be. They came. It was awesome.”

John Mundell, a member of St. Pius X Parish in Indianapolis and Focolare, was there that day and afterward saw the effects of this witness by him and his fellow Focolarini.

“We had some answers that people were perhaps looking for and got a lot of requests after that to share our understanding of how you can have a dialogue with people that are so different,” Mundell said. “So that’s what we did. We had an obligation to share it.”

The kind of interreligious events that Saahir has attended at the Vatican often involve experts and high-level religious leaders.

The weekly lunches at Shapiro’s, though, are shared by ordinary believers sharing with each other the joys and trials of their everyday lives and how they understand them in light of their faith.

One of the attendees at the lunch when Welch was honored was Nur Allah member David Shaheed, a retired Marion County judge. He was one of the original people who shared lunch with Welch starting in 1997.

He was thankful for the deep bond that the lunches at Shapiro’s created among people of differing faiths over the years.

“Once you can sense that, even though a person may have Mass and you have Jumu’ah, when they tell you some of their experiences, it lets you know that God is not just speaking to your faith,” Shaheed said. “There’s a clear demonstration through the lives of others that God is working in the lives of other people.”

Although he won’t be attending the lunches any longer, Welch said that this bond will continue as he moves away.

“Keep on keeping on,” he said. “We’ll be hearing about you all of the time.”

NEXT: Society believes victims, spots sex abuse more than in past