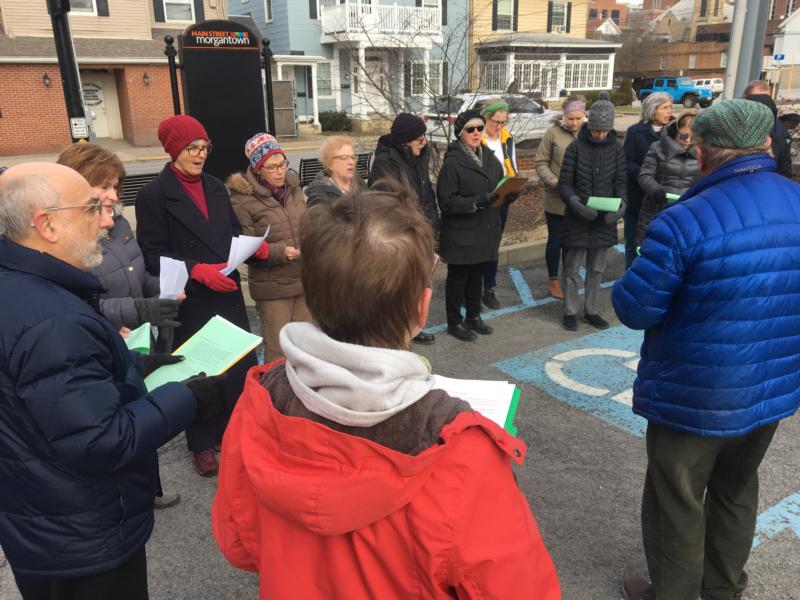 Catholics gather during a prayer service in Morgantown, W.Va., Jan. 26, 2019, for victims of clergy sexual abuse and for more transparency by the church and more lay involvement. (CNS photo/Colleen Rowan, The Catholic Spirit)

MORGANTOWN, W.Va. (CNS) — Members of four area parishes came together in Morgantown Jan. 26 to pray for victims of abuse by clergy and for more transparency by the church and more lay involvement.

Among the intentions for which they prayed were that victims of clergy sex abuse and their families find solace and healing, that all members of the church commit themselves to protecting children and the most vulnerable, for a spirit of collaboration between the laity and clergy, and for reforms to prevent further abuse and to ensure transparency and accountability.

“It’s been a very difficult and challenging time for Catholics with the crisis,” said Betty Evans, a St. Francis de Sales parishioner, who suggested having the prayer service. Evans is a member of the parish’s Stewardship Committee, which organized the service in collaboration with members of the other three parishes.

Twenty-year-old old Lacey Schory, a West Virginia University student from outside Annapolis, Maryland, and a member of St. John University Parish, attended to “support the victims, and to show our continual commitment to the church, and to work toward progression to moving forward from this.”

“Taking time to pause and reflect on what happened and to pray for those still struggling,” she told The Catholic Spirit, Wheeling-Charleston’s diocesan newspaper.

The prayer service was held four months after a lay-run investigation began into allegations of sexual harassment of adults by Bishop Michael J. Bransfield, former head of the diocese, and two months following the Diocese of Wheeling-Charleston’s release of the names of clergy who have been credibly accused of sexual abuse of minors since 1950.

In September, Baltimore Archbishop William E. Lori, who is apostolic administrator of the Diocese of Wheeling-Charleston, assembled the team of all laypeople to conduct the investigation into the allegations.

The archbishop also appointed a layperson, Bryan Minor, as delegate of administrative affairs for the statewide West Virginia diocese. Minor also is executive director of human resources for the diocese and heads the West Virginia Catholic Foundation.

“These are defining moments for the church in West Virginia and across the nation,” Minor said. “The faithful have to balance the shock and anger from what we have learned about sexual abuse in our diocese in previous years with the need for vigilance and a keen focus to ensure a safe environment for all children who are under our care.”

“Those who attended the rally in Morgantown, and everyone who is united in prayer and in support of the victims of clergy sexual abuse, can be hopeful about steps taken thus far to increase transparency in the church. Their prayer, active support and direct involvement will help our diocese heal,” he said.

Minor added: “Having heard the voices of the victims of clergy sexual abuse, Archbishop Lori has taken concrete steps to help our diocese foster a culture of transparency and accountability, and the positive impact of his leadership will be noticeable for years to come.”

The Nov. 29 release of the names of clergy who have been credibly accused of sexual abuse of minors is part of the Diocese of Wheeling-Charleston’s ongoing commitment to transparency in addition to helping aid in the process of reconciliation and healing for the faithful of West Virginia.

When the list was released, Archbishop Lori said that he and other diocesan leaders hoped it would be “one of many steps taken to restore trust with parishioners and the broader community in West Virginia” and considered “a sign of good faith that the diocese is committed to transparency, accountability and to providing a safe environment for children and adults.”

“As we continue to pray for all victims of sexual abuse, let us also recommit ourselves to do everything we can to ensure the protection of all who are entrusted to our care,” he added.

NEXT: Even with his team’s loss, Rams exec counts health, family, faith as wins