Even with his team’s loss, Rams exec counts health, family, faith as wins 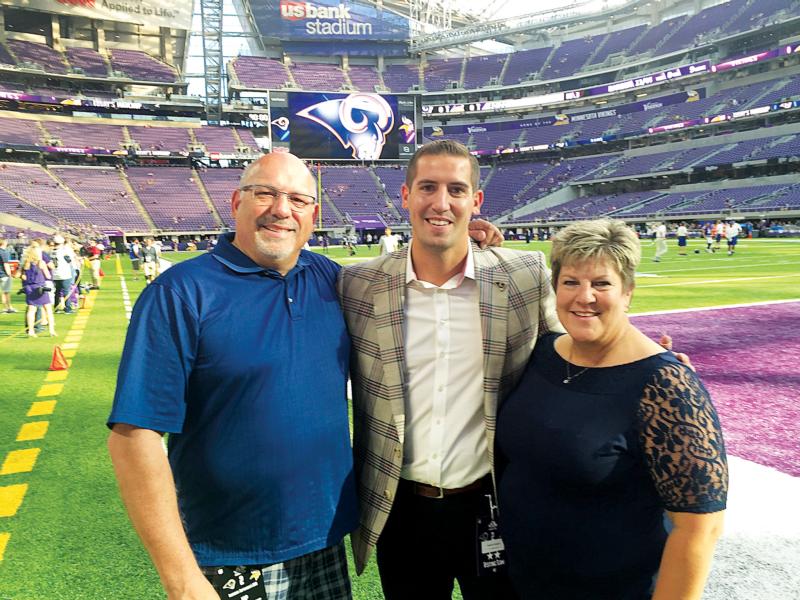 Tony Pastoors, center, poses on the field at U.S. Bank Stadium in Minneapolis with his parents, Pat and Betsy, in 2017 when the Los Angeles Rams played the Minnesota Vikings. When Tony was 5 days old in 1987, his mother kneeled in a hospital chapel to pray his life would be spared, after he was diagnosed with Hirschsprung’s disease, which attacks the colon. Now 31, Tony is vice president of football and business administration for the Los Angeles Rams football team. (CNS photo/courtesy the Pastoors Family)

ST. PAUL, Minn. (CNS) — When Tony Pastoors was 5 days old, his mother, Betsy, kneeled in a hospital chapel to pray that his life would be spared.

But, after bringing him home, she quickly discovered he wasn’t able to have a bowel movement. Doctors diagnosed him with Hirschsprung’s disease, which attacks the colon, and he was scheduled for surgery Sept. 29 of that year.

She pleaded for God to save him, and in those tense and prayerful moments never imagined that he would not only survive the surgery, but go on to star in football at Totino-Grace Catholic High School in Fridley, Minnesota.

The summer after his graduation from Dartmouth in 2010 with a history degree, he landed a front-office job with the then-St. Louis Rams. Now the vice president of football and business administration, he helped build the franchise, which moved to Los Angeles in 2016, into a Super Bowl team, helping with the draft and taking part in interviewing now-head coach Sean McVay.

The Rams lost to the New England Patriots Feb. 3 in Super Bowl LIII, 13-3.

Just days before the game, Betsy and her husband, Pat, who both graduated from Totino-Grace in 1980, boarded a plane for Atlanta, where they would reunite with their son and all would cheer for their newest blue-and-gold football squad.

“It’s exciting,” said Tony, 31, of being part of the Super Bowl. “I’ll be honest, I haven’t actually had a chance to step back and reflect on any of it because it has been so busy. We’re welcoming our friends and family. We have three planes coming … filled with friends and family.”

He made the comments in an interview ahead of the Big Game with The Catholic Spirit, newspaper of the Archdiocese of St. Paul and Minneapolis.

Despite how far Tony has come, both on the field and in his faith, Betsy has no trouble going back in time to the day of her son’s surgery. She was warned it would be long, and the track record of the procedure was short, as doctors only had been using it to treat the disease for five or 10 years. Prior to that, babies with the disease often died, she said.

She went into the hospital’s chapel and made her plea for divine assistance.

Seven hours later, her prayers were answered. After more surgeries over the next two years, Tony finally completed his recovery. There were no residual effects, and he eventually turned his thoughts toward athletics.

The youngest of three brothers, he followed in the footsteps of Tim, 35, and Ted, 33, and played three years of varsity football at Totino-Grace. He also competed on the track and field team. Of equal importance to the family was following the faith tradition. Tim and Tony both won the Lasalian Man of the Year award their senior year. It is a faith-based award given to one senior boy and one senior girl each year.

The youngest of the Pastoors children, Traci Bennington, 29, is now a campus minister at Totino-Grace and values even more the faith she sees in the older brother she got to go to school with for two years at “T-G.”

“Just like on the football field, Tony shows leadership in his faith,” said Bennington, who began working at the school in 2012 as a teacher and a track coach. “He was a member at T-G of our student ministry team, and I, being a younger sibling, got to observe and watch that.

“And now, being in charge of it (ministry), I know that faith in high school is a challenging thing, to be the kid to stand up and talk about their faith, and to be a reader at Mass. And, Tony was never ashamed or afraid to do that.”

“He was a great leader, but also a great player,” said Tim, who works at Totino-Grace as director of facilities and technology.

In his junior year, Tony was offensive MVP of the North Suburban Conference; in his senior year, he was the conference overall MVP.

The success quickly faded after he graduated from T-G. Dartmouth had a losing season every year he played. And during his first year with the Rams, they finished 7-9. The team had a winning season a year ago, when they went 11-5 and lost in the first round of the NFC playoffs.

The losing seasons at Dartmouth and with the Rams forged one of his many character traits: resilience.

Pastoors credits his coaches and mentors at Totino-Grace for helping him grow as a man of faith and a football player, and he now follows the lead of his new mentor, McVay, who has put the organization on a winning path since his hiring before the 2017 season.

“It’s all about the team, and it’s all about the people with you and next to you and putting them first,” Tony said. “I think that’s really what this Rams team is — it’s something Sean (McVay) always says, ‘The team has a ‘we’ not ‘me’ mentality.'”

Davis and Hrbacek are on the staff of The Catholic Spirit, newspaper of the Archdiocese of St. Paul and Minneapolis.