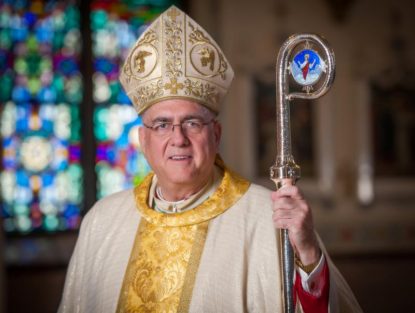 WASHINGTON (CNS) — Amid current discussion that the Supreme Court could possibly overturn Roe v. Wade, the decision legalizing abortion, some states are currently working to make sure their laws legalizing abortion are secure, while other states are trying to pass laws to further restrict or ban the procedure.

There are about 20 suits challenging state laws restricting abortion that could make their way to the Supreme Court.

The current mood “is calling for us to have a new energy and new zeal to win the culture,” said Archbishop Joseph F. Naumann of Kansas City, Kansas, chairman of the U.S. Conference of Catholic Bishops’ Committee on Pro-Life Activities.

The archbishop told Catholic News Service that many states are now in “somewhat of a panic attack,” stressing that states which support legal abortion want to “keep it intact” if Roe v. Wade is overturned.

In this environment, he said, it is important for pro-life activists to “ramp up our efforts on every level.” He called on Catholics to get involved in local Right to Life chapters or with state Catholic conferences to have direct interaction with state legislators.

But the archbishop also said lobbying efforts alone are not enough.

“Legislation can be lost as quickly as it is gained,” he said, stressing that public policy is important but that winning the “hearts and minds” of the American public is key, pointing out that the church is involved in the political sphere primarily to form people’s consciences.

And the most important education about the abortion issue happens one on one, with neighbors, families and co-workers, he added.

He said advocacy work is just one part of the USCCB’s pro-life secretariat along with prayer, pastoral care — providing alternatives to abortion as well as post-abortion ministries — and education, which is not just informing people about the issue but working to change opinions about it.

Archbishop Naumann also spoke about the issue of excommunicating Catholic politicians who have supported or voted for legislation in support of abortion. Some bishops called for excommunicating New York Gov. Andrew Cuomo, a Catholic, who signed into law the Reproductive Health Act, or RHA, in late January. It removed abortion from New York’s criminal code and now permits abortions with very few restrictions at any week of a pregnancy.

In 2008, Archbishop Naumann asked Kathleen Sebelius, then governor of Kansas, to abide by his request to stop receiving Communion because of her support for abortion legislation. In a column for the archdiocesan newspaper, The Leaven, he said the governor’s support for abortion sent a “spiritually lethal message” to other Catholics.

Eleven years later, the archbishop feels the same way. He said there is “a lot of anxiety about those in public life who call themselves Catholic yet advocate for abortion” and noted that his position has been to dialogue with these politicians first, as he did with Sebelius.

Catholic politicians need to know the “spiritual harm they are in” and also how their actions scandalize Catholics, he said.

When dialogue doesn’t work, which was the case with Sebelius over a decade ago, he said he took the further step of asking the governor “not to present herself at the Eucharist.” He said the action was not to embarrass her and also was presented with the idea that she should police herself.

“As bishops, we have to take steps to protect people from being misled by political leaders,” he said.

NEXT: Vatican official to meet in Texas with border bishops from U.S. and Mexico