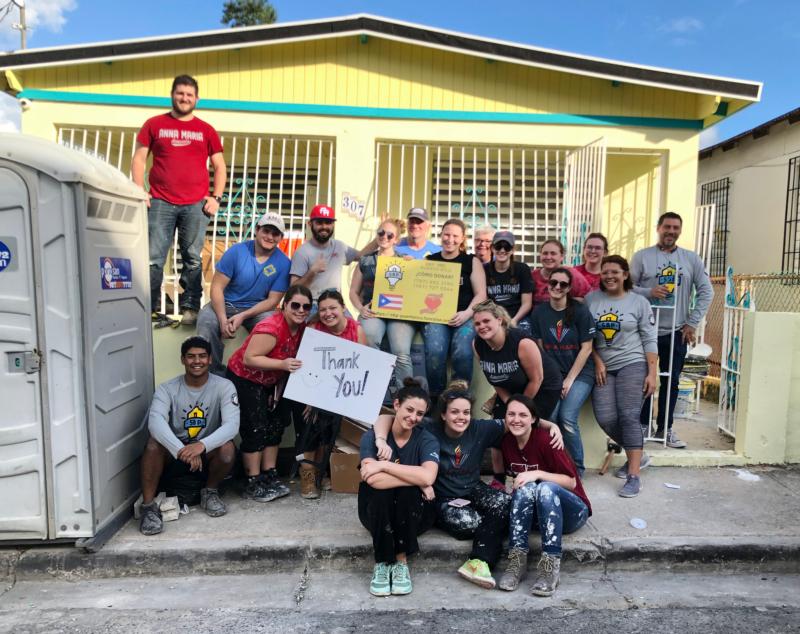 Fourteen students from Anna Maria College in Paxton, Mass., pose for a photo during an Alternative Winter Break service trip to Puerto Rico in January. The students helped rebuild the ravaged houses of families who had seen their hearts and lives broken by the widespread damage caused by Hurricane Maria in 2017. (CNS photo/courtesy Anna Maria College)

WASHINGTON (CNS) — They say that home is where the heart is.

Fourteen students from Anna Maria College in Paxton, Massachusetts, understood this adage all too well and sacrificed a significant portion of their winter break in January to help rebuild the ravaged houses of families who had seen their hearts and lives broken by the widespread damage caused by Hurricane Maria in 2017.

During a weeklong service trip that took place while other students were reveling in their new Christmas gifts or stressing over their schedules for the upcoming semester, the Anna Maria students were taking on “a variety of home construction assignments at three different homes in San Juan, Puerto Rico,” which included “installing/gluing floor tile, caulking, painting, installing window trims, grouting tile and dry walling,” according to a news release from the university.

Melissa LaNeve, director of campus ministry at the small Catholic liberal arts college, also made the trip. She told Catholic News Service in a phone interview that she was impressed with the initiative taken by the students and hoped the college’s integration of service into its mission would serve as a model to other institutions.

She was most impressed by “their determination,” as many of the volunteering students “had not done service work” prior to this trip. Some students had gone from hesitant to “completely determined to get the project done” over the course of the week, said LaNeve.

LaNeve hopes that other colleges will “see the value in offering these kinds of opportunities to students’ because it helps get them “out of their college bubble.” She sees no reason other colleges shouldn’t put service directly into their missions, because “it can only benefit someone to do service and integrate it” into their long-term career goals.

But LaNeve noted a particular kind of service.

“‘Helping’ is bringing someone up to your level,” LaNeve explained, “‘serving’ means recognizing someone’s dignity” as an equal. Assuming that kind of humility means donating your time and talent even if the assigned job is “not how you want to contribute,” she said. It was this distinction between “helping” and “serving” that LaNeve tried to impart to her students during the trip.

Jessica Barbera, hailing from Anna Maria’s class of 2020, was among the students who made the trek to the battered island.

Barbera, who plans on becoming a nurse, affirmed to CNS that the mission dovetailed with her career plans by fueling her desire to help people.

“I already like serving others,” Barbera said, pointing out that her nursing training and service trips constituted “two different ways of helping others.”

And even though Barbera had been on service before with Habitat for Humanity, this was an entirely new experience for her.

“In Puerto Rico, it was a lot harder to take in,” she said. The community in San Juan where Barbera and her companions had been deployed was poor and “(t)hey really needed it. … I had never been in a community like that before.”

Keannah Dunsmore, also in the class of 2020 and considering medical school, emphasized that the trip had made her stronger in her faith as a Baptist.

Before the trip, “I wasn’t one to pray every night,” Dunsmore remarked to CNS Feb. 11. But exercising her ability to serve those in the midst of a disaster made her count her blessings and demonstrated that she “should really start doing all those things.”

Dunsmore also told CNS that she had never been on any mission trips before and that doing so opened her eyes to what was beyond the “college bubble” described by LaNeve: “It was very shocking … just because you take for granted what you have in your life.”

Both girls shared the same experience as their most memorable one of the trip: Seeing the looks on the faces of the families they had been toiling for.

Dunsmore reported that it had made every second of the arduous labor worth it. “The work was very difficult and … it was very hot,” she said. But on the Friday when the family of the house where she had been working returned to move back in, “seeing how happy and surprised (the grandson’s) reaction was” simply upon seeing his family’s kitchen floor retiled was reward enough for her.

Barbera agreed, noting that her favorite moment was “meeting the family that we were doing the house for.” According to her, it was clear that “they saw how lucky they were” among other families in Puerto Rico.