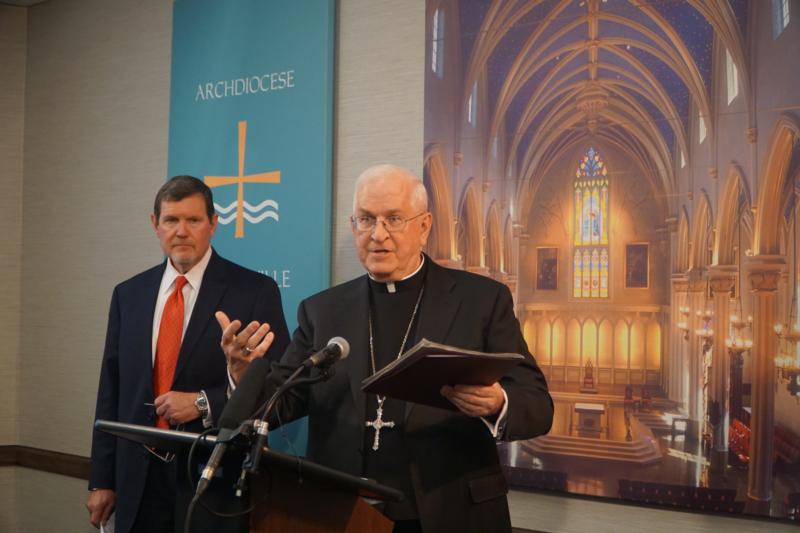 LOUISVILLE, Ky. (CNS) — A report by an independent investigator into the Archdiocese of Louisville’s handling of clergy sexual abuse in the course of 80-plus years begins as a story of failure followed by what the report calls “a sea change” in the past 17 years.

Attorney Mark Miller penned the report — that includes a list of 34 credibly accused priests of the Archdiocese of Louisville — after spending three months poring over 400 files and thousands of pages of documents.

He described his process and findings during a news conference Feb. 8 at the Archdiocese of Louisville Pastoral Center, formally presenting his report to the media and John Laun, chair of the archdiocese’s Sexual Abuse Review Board.

The board had requested the third-party investigation last fall, according to Archbishop Joseph E. Kurtz of Louisville.

During the news conference, Archbishop Kurtz repeatedly indicated that the report is meant to be preliminary — a beginning, not an end, of a larger effort to bring healing to victims and transparency to the archdiocese’s handling of sexual abuse by clergy.

“Our primary purpose today is healing — healing of people who are victim survivors, many of whom I’ve spoken directly to and who have told me that having a report and a list of credibly accused priests will provide validation for something that has been part of their life, often for many decades.

“And secondly,” he said. “There is the thought that it will inspire others who have not come forward to come forward now for the healing that they truly deserve.”

He urged people who want to report abuse to contact police and the archdiocese, adding, “Do not delay in that.”

Miller’s review identified 34 priests credibly accused of sexually abusing one or more children since the 1930s. An addendum to the report included a list of 14 other men — 13 members of religious orders and a bishop — with credible accusations.

All 48 men are listed on the archdiocese’s website, www.archlou.org.

Among those listed are 22 diocesan priests with credible accusations that have been substantiated. They are listed on the website along with their past assignments. They are either deceased, removed from ministry or in prison.

Miller writes that reports of abuse in these cases were “substantiated by either admission of the priest, a criminal investigation and prosecution, a Sexual Abuse Review Board finding, or by other corroboration of the report.”

A dozen diocesan priests are listed as having credible accusations that couldn’t be fully investigated. They are listed on the website along with their past assignments.

In those cases, Miller writes, “there was not enough information to fully investigate and confirm the report. For example, the priest is deceased and/or the victim/survivor has been able to share only limited information, or there was absence of corroborating information or records.”

All are deceased but one, who is no longer a priest.

The case of Bishop J. Kendrick Williams, who was a priest of the Archdiocese of Louisville and served as bishop of Lexington, Kentucky, from 1988 to 2002 had been referred to the Vatican.

In addition to listing those with credible accusations, Miller’s report analyzes the archdiocese’s handling of abuse. The report draws a line between two distinct time periods in the archdiocese — pre-2002 and post-2002.

In 2002, the archdiocese adopted the “Charter for the Protection of Children and Young People,” a document approved by the U.S. bishops in June 2002.

The charter outlines preventive measures for protecting children and directs how dioceses should handle reports of abuse. In implementing the charter, the archdiocese developed policies and procedures, a code of conduct and a “safe environment” training program that are mandatory for priests, as well as employees and volunteers who work with children.

Miller described a distinct “sea change” in the way allegations of abuse were handled beginning in 2002.

“Significant failures in addressing reported child sexual abuse existed before the charter,” he writes in the report’s conclusion. “It seems that reports of child sexual abuse were considered more of an unpleasant personnel matter than a serious crime with serious long-term (effects).”

Then “with the enactment of the charter, there has been a sea change in the archdiocesan response to reports of child sexual abuse,” he wrote. “Reporting to law enforcement is emphasized at all initial encounters by everyone involved in the process.

“The pastoral response to those reporting abuse is victim focused with the scales far outweighed by the needs of the person making the report.”

He also noted improvements today in psychological assessments of accused priests and a shift toward transparency that continues to develop with the release of his report.

Miller said he didn’t tally the number of victims in archdiocesan files. In 2003, the Archdiocese of Louisville settled 243 civil lawsuits related to clergy sexual abuse for $25.7 million.

In a letter accompanying the report, Archbishop Kurtz emphasized his concern for the healing of victim-survivors and for transparency.

“No child should ever be subjected to abuse, particularly by someone who is responsible for nurturing a child’s faith,” he said. “We can only be healthy as a church and as a society if we honestly confront the sexual abuse of children and rebuild relationships one at a time.”

As he did at the news conference, Archbishop Kurtz in the letter emphasized the report was just a beginning in addressing abuse and helping survivors. His letter was published in The Record, the archdiocesan newspaper.

The Archdiocese of Louisville encouraged anyone who has been the victim of sexual abuse or has information about sexual abuse to contact Martine Siegel, victim assistance coordinator for the archdiocese, by calling (502) 636-1044 or sending an email to victimassistance@archlou.org.

Editor’s Note: The full report can be found at on the Louisville Archdiocese’s website here. Archbishop Kurtz’s letter can be found in The Record archdiocesan newspaper here.