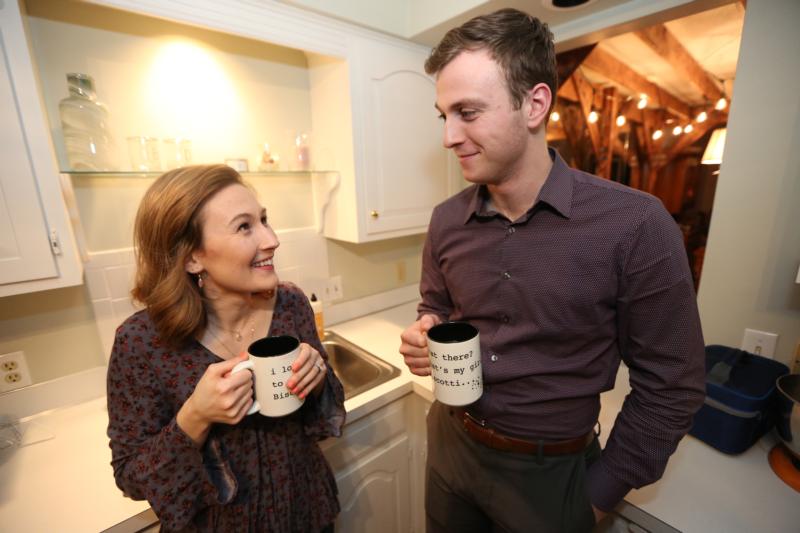 ST. PAUL, Minn. (CNS) — A decade ago, David Busacker was a high school sophomore looking for a way to fit in, and he decided to give drama a try.

Had he made a different choice, he might not have married Bridget Scott in 2016. The two found themselves on the set of “Little Women” in 2009 at their public high school, St. Anthony High School in St. Anthony. She played Jo March; he played her father. Near the end of the performance, he made his entrance and spun her on the stage.

“That’s when I fell in love with her,” he said.

It took her longer to feel the same, but eventually they started dating while both were attending the University of Minnesota. During that time, David became a Catholic, and the couple got engaged in June 2015.

They eagerly dove into marriage preparation at St. Charles Borromeo in St. Anthony, Bridget’s childhood parish. They absorbed everything they could during their meetings with the priest and mentor couples in the parish.

But they couldn’t get enough.

“The prep was good at St. Charles, but we were looking for even more,” said Bridget, 26. “I think we were, in some ways, a little overzealous trying to prepare so much, but I think we also just wanted to make sure we were tapping into all the resources.”

They turned to a program for engaged couples at St. Mark in St. Paul. They found their nine months in the program so enriching that they joined the parish after their wedding. A year later, they started their own group for newly married couples. They named it after Sts. Louis and Zelie Martin, the parents of St. Therese of Lisieux who were canonized in 2015. They launched it with four couples, and they hope to add more newlyweds in the next year.

They liked the St. Mark marriage preparation program because it connected young engaged couples through discussion and the “Beloved” video series produced and distributed by the Augustine Institute in Colorado, which offers Catholic content on a variety of topics, including marriage.

“It was really awesome,” Bridget said of St. Mark’s engaged couples program, which included four to five other couples. “It was intimate. … You were really getting to know people,” she told The Catholic Spirit, newspaper of the Archdiocese of St. Paul and Minneapolis.

During that time, they were drawn to the religious community Pro Ecclesia Sancta (For the Holy Church) of priests, brothers and sisters who serve St. Mark Parish. They joined the community’s lay movement, Catholic Advance. They took part in retreats and weekly eucharistic adoration. Eventually, they felt a desire to give to other couples what they had received spiritually.

As they discussed what that meant, they acknowledged what they perceived as a shortage of programs for newlyweds in the Catholic Church. It was a problem they felt called to address.

“There was a ton (of resources) available to us up to the minute we got married,” David said. “Then, the minute after we exchanged vows, it seemed to us that there was nothing available.”

Bridget agreed. “There’s so much emphasis on marriage prep,” she said. “But, what are we doing once people are married? What is there to offer them to keep their marriages strong, and offer resources when it is hard or when you’re just trying to figure it out?”

At a fundamental level, they were trying to understand what it means for a husband and wife to, as the Bible says, “become one flesh.”

“Both of us are fiercely independent people,” David said. “We’re both extremely Type A, competitive people.”

As they wrestled with this question, they had a growing desire to explore it with other newly married couples. It started with one couple they hung out with after getting married. They often would stay up talking until 2 a.m., with deeper topics coming up near the end.

“When that would happen, we were like, ‘This would be so cool to have with other couples, too, and expand it beyond just the four of us,'” Bridget said. “At that point, we were married probably about a year and really had the desire in our hearts to get to know other couples and have something more formalized.”

As they developed their ideas, they decided that meetings would take place in the couples’ homes to cultivate hospitality, which the Busackers believe is lacking in contemporary culture. It also would create a deeper connection between the couples, which, hopefully, would strengthen everyone’s marriages. Their goal was simple: “Have people in, live life together in the mess of life,” Bridget said.

The couples meet twice a month — first as couples, then as men and women separately. So far, Bridget and David have organized two six-month programs — one in 2018 and another that finished in January. In that program, they watched and discussed segments of the “Beloved” series and thought that format worked best for the participating couples.

“There were a lot of growing pains, I think, in just growing in trust with each other to get to the point of comfortably talking about different topics,” Bridget said. “But, I think it’s been really cool. Two of the couples have had kids (while) in our group, which was really awesome. And, I think we’ve gotten really comfortable with each other and continue growing in community together, which is what we wanted.”

As they’ve developed the meetings’ format, they’ve also learned to allow for flexibility.

“We both wanted it to be perfect,” David said. “We both wanted this to be the right ministry everybody needs. But in reality, what people wanted was just to see each other and talk openly. And, I really think that everything we’ve done so far has achieved its purpose. We created a group of people where we could honestly talk about hard stuff with one another.”

Hrbacek is a staff writer and photographer at The Catholic Spirit, newspaper of the Archdiocese of St. Paul and Minneapolis.

NEXT: Independent investigator issues report on abuse in Louisville Archdiocese