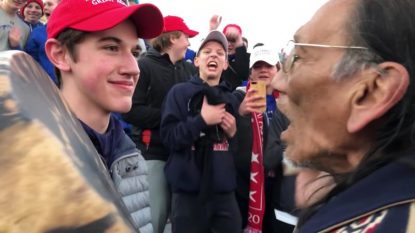 Nick Sandmann, a junior at Covington Catholic High School in Park Hills, Ky., and others students from the school stand in front of Native American Nathan Phillips Jan. 18 near the Lincoln Memorial in Washington in this still image from video. An exchange between the students and Phillips Jan. 18 was vilified on social media the following day, but the immediate accusations the students showed racist behavior were stepped back as more details of the entire situation emerged. (CNS photo/Kaya Taitano, social media via Reuters)

WASHINGTON (CNS) — The Catholic high school student at the center of an encounter with a Native American tribal leader in Washington filed a $250 million defamation lawsuit Feb. 19 against The Washington Post claiming the newspaper’s coverage of the incident was biased.

The 38-page suit claims there were “no less than six false and defamatory articles” in the newspaper about the Jan. 18 encounter at the Lincoln Memorial in Washington, which went viral almost immediately.

It also claims the newspaper “ignored basic journalist standards because it wanted to advance its well-known and easily documented, biased agenda against President Donald J. Trump by impugning individuals perceived to be supporters of the president.”

“The Post proved itself to be a loud and aggressive bully with a bully pulpit,” the lawsuit says.

Nick Sandmann, a junior at Kentucky’s Covington Catholic High School, is known now for wearing a “Make America Great Again” hat while smiling just inches away from the Native American leader, Nathan Phillips, who faced him as he chanted and beat a drum.

The teen is represented by Todd McMurtry of the Covington-based law firm Hemmer Defrank Wessels and by L. Lin Wood, an Atlanta attorney involved in high-profile defamation suits.

The suit is posted on the firm’s website following an introduction that says the compensatory and punitive damages are for the “harm so many have done to the Sandmann family.”

“This is only the beginning,” it adds, alluding to other potential lawsuits.

The lawsuit echoes this initial statement, specifically zeroing in on the Washington newspaper, stating: “In a span of three days in January of this year commencing on January 19, the Post engaged in a modern-day form of McCarthyism by competing with CNN and NBC, among others, to claim leadership of a mainstream and social media mob of bullies which attacked, vilified, and threatened Nicholas Sandmann, an innocent secondary-school child.”

The complaint is seeking $250 million because Jeff Bezos, Amazon CEO, paid that amount for the newspaper when he bought it six years ago.

Trump took to Twitter Feb. 20 to comment on the lawsuit saying: “Go get them Nick. Fake News!”

According to The Washington Post, the newspaper’s spokeswoman, Kristine Coratti Kelly, said: “We are reviewing a copy of the lawsuit, and we plan to mount a vigorous defense.”

Sandmann’s attorneys said the Post “did not conduct a proper investigation before publishing its false and defamatory statements of and concerning Nicholas.”

They also accused the Post of ignoring online videos that provided more details about the incident in question and said reporters used “unreliable and biased sources” and acted with “knowledge of falsity or a reckless disregard for the truth.”

The lawsuit goes through every detail of the now-famous incident that took place Jan. 18 when the students who had attended the March for Life were waiting for their buses.

On Jan. 19, clips from a video that went viral almost immediately, showed these students surrounding Phillips while appearing to be mocking him. The clip caused immediate outrage, particularly on social media. But by the next day, extended footage of how the situation unfolded revealed that another group at the had taunted the students and some responded back. Phillips had walked over to the students and the group, as an intervention.

The conclusion of that report, released by the Covington Diocese Feb. 13, found no evidence that the students had issued “offensive or racist statements” that had been accused of doing.

In a letter to parents of Covington Catholic High School, Bishop Roger J. Foys of Covington said his hope that the investigation would “exonerate our students so that they can move forward with their lives has been realized.”

PREVIOUS: Tolton sainthood cause advances; next step would be ‘venerable’ decree