Tolton sainthood cause advances; next step would be ‘venerable’ decree 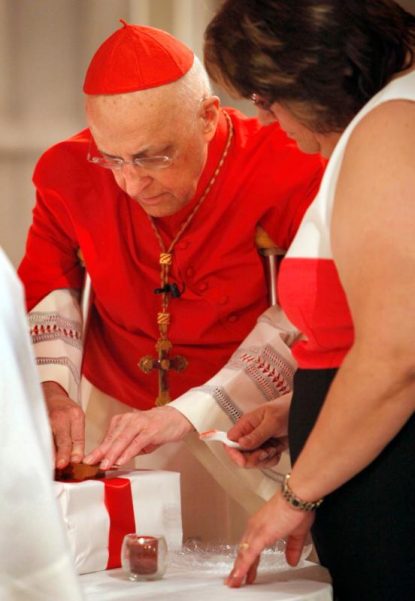 Chicago Cardinal Francis E. George presses down on the archdiocesan seal in wax after he signed the final documents in the dossier for the sainthood cause for Father Augustus Tolton at the Archbishop Quigley Center in Chicago Sept. 29, 2014.  (CNS photo/Karen Callaway, Catholic New World)

CHICAGO (CNS) — The canonization cause for Father Augustus Tolton is just one step away from going to Pope Francis for the priest to be declared “venerable.”

On Feb. 5, the feast of St. Agatha, a nine-member Vatican theological commission unanimously voted that Father Tolton’s cause be moved forward to the cardinals and archbishops in the Congregation for Saints’ Causes for a final vote to send a decree of the priest’s “heroic virtues” to Pope Francis for his approval.

Upon the promulgation of that decree, Father Tolton would receive the title “venerable,” which indicates he lived the theological virtues of faith, hope and charity and the cardinal virtues of prudence, justice, fortitude and temperance at a heroic level.

Father Tolton, the first African-American to be ordained a Catholic priest for the United States, was born into slavery, ordained in 1886 in Rome because no U.S. seminary would take him and died serving in Chicago in 1897.

Father James Healy (1830-1900) is considered by some to be the first black U.S. Catholic priest in the U.S. He was biracial; his father was Irish. Born in Georgia, he was ordained in 1854 in Paris for ministry in the U.S. He later became a bishop, heading the Diocese of Portland, Maine.

If canonized, Father Tolton would be the nation’s first African-American saint.

“Father Tolton’s story represents the long and rich history of African-American Catholics, who have lived through troubling chapters and setbacks in our American history,” said Chicago Auxiliary Bishop Joseph N. Perry, archdiocesan postulator for the cause.

“Lessons from his early life as a slave and the prejudice he endured in becoming a priest still apply today with our current problems of racial and social injustices and inequities that divide neighborhoods, churches and communities by race, class and ethnicity. His work isn’t done. We will continue to honor his life and legacy of goodness, inclusivity, empathy and resolve in how we treat one another.”

Bishop Perry said unexplained physical healings have been reported to the cause and are under investigation.

The Archdiocese of Chicago formally opened Father Tolton’s cause for canonization in 2010.

Norbertine Father Gerard Jordan holds the canonical title “promoter of the cause” and travels the country sharing the message of Father Tolton and the canonization efforts on behalf of Bishop Perry.

He said Father Tolton’s story transcends the lines of race, gender and priesthood.

“If we start with the black part, then it’s just a nice Black History Month story. If we start from the priesthood part you only include the ordained,” Father Jordan told the Chicago Catholic, the archdiocesan newspaper. “First off, he didn’t start off as a black man or an ordained priest. The first thing that Tolton was was a created child of God. You gotta start there.”

“The first experience Tolton would have recognized, and it would have had a physical and spiritual effect on him, was his baptism,” Father Jordan said. “If we connect with his baptism, then everybody is included and can relate to his story.”

All the baptized are connected, he said.

“The baptism of Tolton tells the real story that we’re supposed to be paying attention to and that’s the story of the Gospel of Jesus Christ,” Father Jordan said. “Everything that Tolton experienced in life is the Gospel story.”

Father Tolton had great love for the church, the people of God.

“He saw himself connected to the church who loved him. His mother, Martha Jane, was his physical mother but his spiritual mother was very real to him,” Father Jordan said. “He said himself that the Catholic Church was the only thing that would help him to beat the double slavery of his mind and his body.”

In his lifetime, Father Tolton also talked about how his mother the church took him as a poor slave to become fully who he was in the eyes of God.

“Everybody has to realize that the greatest inheritance we will ever receive is our baptism,” Father Jordan said. “It is your decision whether or not you’re going to keep that inheritance and invest in it or whether you’re going to squander it or give it away or abandon it. Tolton never abandoned his inheritance.”

His story begins and ends there, the priest said.

“Once people relate to Tolton’s baptism they will find pieces of their life that they can relate too.”

PREVIOUS: Bill that prices carbon pollution would yield a dividend for everyone