In the U.S., a sobering mood after news of McCarrick’s laicization 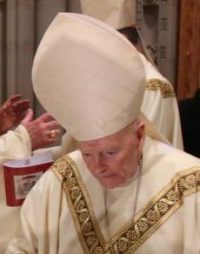 WASHINGTON (CNS) — The accusations surrounding former U.S. Cardinal Theodore E. McCarrick have been hanging over U.S. bishops and faith communities in the dioceses and archdioceses where he served — New York, Metuchen and Newark in New Jersey, and Washington — since last year.

Even though the Vatican stripping McCarrick of his clerical status Feb. 16 was expected, the news cast a somber mood over those faith communities already grappling with what had happened while he was among them in the past and whether the Vatican’s decision can help the church in the U.S. move forward.

In announcing its decision, the Vatican said McCarrick was found guilty of “solicitation in the sacrament of confession and sins against the Sixth Commandment with minors and with adults, with the aggravating factor of the abuse of power.”

“It is profoundly disheartening and disturbing to know that a church leader, who served and led our Archdiocese of Newark for 14 years, acted in a way that is contrary to the Christian way of life as well as his vocation as a priest of Jesus Christ,” said Cardinal Joseph W. Tobin of Newark in a statement following the announcement.

“To all those abused by clergy, especially the victims of Theodore McCarrick, I continue to express my profound sadness and renew heartfelt apologies for the lifelong suffering you have endured,” he said. “I support your continued healing and uphold my commitment of prayer for you. I also ask my brothers and sisters in Christ to pray for those victimized by clergy and for the transgressors as well.”

James Grein, one of those who have publicly said he was abused by the former cardinal, said in a statement released by his attorney that “today I am happy that the pope believed me.”

“For years I have suffered, as many others have, at the hands of Theodore McCarrick,” he said in the statement. “It is with profound sadness that I have had to participate in the canonical trial of my abuser. Nothing can give me back my childhood and I have not taken any pleasure in testifying or discussing what happened to me. There are no winners here.”

However, Grein, who provided Vatican officials with accounts that McCarrick sexually abused him as an 11-year-old child, including during confession, said he was “hopeful now I can pass through my anger for the last time. I hope that Cardinal McCarrick will no longer be able to use the power of Jesus’ church to manipulate families and sexually abuse children.”

“This great historical and holy situation is giving rise to all Catholics and victims of abuse across the world,” he said. “It’s is time for us to cleanse the church.”

As of the day of the announcement, McCarrick was believed to be living in a small religious community of Capuchin Franciscans, St. Fidelis Friary, in rural Victoria, Kansas, where he had been ordered to go by the Vatican to live since late September “a life of prayer and penance” until the accusations against him could be examined.

“Mr. McCarrick will continue to reside at the St. Fidelis Friary in Victoria until a decision of permanent residence is finalized,” said Bishop Gerald L. Vincke, who heads the Diocese of Salina, Kansas, which is where the friary is located.

The decision to whether to remain there after the Vatican’s action seems to rest with McCarrick and the religious community of Capuchins, which according to its website is made up of five priests and one religious brother. When the decision to find a place where then-Archbishop McCarrick could reside while a decision on his status was being weighed, Bishop Vincke had said that in allowing McCarrick to live in the diocese, he had to reconcile his feelings of “disappointment, anger and even resentment” toward him.

On Feb. 16, the bishop thanked the religious community of Capuchins “for their charity and compassion shown to all who seek refuge in the church, as well as the remarkable people of Victoria for their mercy in this difficult situation.” He added that he hoped the Vatican decision “may help bring healing to all affected by sexual abuse and those hurt by this scandal.”

The day seemed to be one of reckoning as brother bishops and organizations that once had worked, and sometimes praised, the former prelate for his work grappled with the Vatican’s pronouncement.

The University of Notre Dame almost immediately announced it was rescinding the honorary degree it conferred on him in 2008, a decision the school had said it would take action upon once the Vatican reached a final conclusion on the accusations given that McCarrick had maintained his innocence.

McCarrick said in a June 20 statement, following his announcement that he was stepping down from the College of Cardinals, that he had “absolutely no recollection” of abuse accusations that surfaced after U.S. newspapers reported detailed accounts that he exposed himself and sexually molested at least two boys in his early years as a priest — accusations that spanned almost five decades and were too old to legally prosecute.

Boston Cardinal Sean P. O’Malley called the pope’s action “important in administering justice” for McCarrick’s “crimes and sins” but “it cannot in and of itself provide healing for those so terribly harmed by the former archbishop’s scandalous violations of his ministry or for their families.”

This action “by itself will not bring about the healing needed in the Catholic community and our wider society; both are justifiably appalled and outraged that the former archbishop could have for so long inflicted harm on minors and young adults vulnerable in the life of the church,” said Cardinal O’Malley, who heads the Vatican’s sex abuse advisory commission.

Church leaders “are rightfully judged by our actions and not our words,” he continued. Apologies are part of the healing process but without action “they ring hollow in light of the revelations of sexual abuse by clergy that have come forth during the past year and almost 20 years prior.”

The church’s leadership “must enforce accountability for cardinals and bishops if we hope to have the opportunity to engage the laity in the work of tangible change in the church.”

The Archdiocese of Washington, where McCarrick last served in his 60 years of priesthood and where he was a well-known and ubiquitous figure, said in a brief statement that the imposition of the penalty “underscores the gravity of his actions.”

“Our hope and prayer is that this decision serves to help the healing process for survivors of abuse, as well as those who have experienced disappointment or disillusionment because of what former Archbishop McCarrick has done,” the statement said.

Baltimore Archbishop William E. Lori in a statement said that the day was “unprecedented” but showed Pope Francis’ “willingness to hold accountable one who would harm a child, regardless of rank.”

“I pray this decisive step will advance the church’s efforts to increase accountability for bishops and in so doing, inspire greater confidence in those who rightly expect so much from those who minister on behalf of the church,” he said.

Groups such as The Catholic Association said in a statement that even though the decision “comes none too soon … it’s only a first step in addressing the McCarrick scandal and eliminating the larger scourge of sexual abuse at every level in the church.”

“Much work remains — holding accountable those in the church hierarchy who looked the other way as McCarrick rose through their ranks and ensuring that the Catholic Church worldwide is united in safeguarding children and young adults from sexual abuse and restoring priestly celibacy among its shepherds,” said Andrea Picciotti-Bayer, legal adviser for the organization. “McCarrick’s defrocking is a start, but only a start as the Vatican’s abuse summit begins next week in Rome.”

Pope Francis has convened the heads of bishops’ conferences from around the world for a summit on sex abuse set for Feb. 21-24 at the Vatican.

The coming days no doubt will bring more questions about what the decision means in the historical spectrum of the Catholic Church at all levels.

Massimo Faggioli, a church historian and professor of theology at Villanova University in Philadelphia, said the decision is “theologically important because it would signal that sexual abuse is incompatible with priesthood.”

“It would become part of the discussion on what’s the meaning of ‘ontologically changed’ by priestly ordination,” he said. “Canonically, it would not be the first time, but the first for a cardinal who ecclesiologically is one of the members of the presbyterium of the bishop of Rome. Symbolically, the laicization of McCarrick would be acknowledging the wound inflicted on the pope himself.”

NEXT: Dolan: Church loves, welcomes pregnant women, is ‘honored’ to serve them