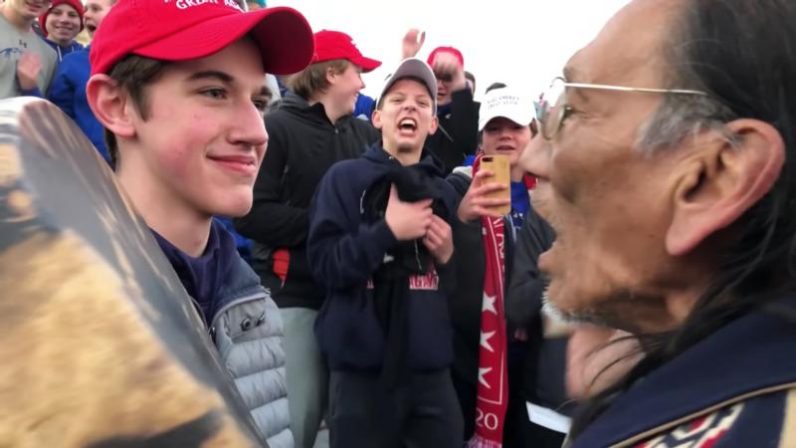 WASHINGTON (CNS) — Two weeks after the much-talked about and interpreted incident that occurred between Catholic high school students, a Native American tribal leader and members of another protest group, lawyers for one of the students sent more than 50 letters to media outlets, individual journalists, celebrities and Catholic dioceses and archdioceses warning of possible legal action.

The letters — from the lawyers for Covington Catholic High School student Nick Sandmann, the student most prominent in viral footage of the Jan. 18 encounter in Washington — were sent to individuals and groups the attorneys think may have defamed or libeled Sandmann particularly in the initial reaction on social media.

The incident in question occurred when students from Kentucky’s Covington Catholic High School, who had attended the March for Life, were waiting for buses to pick them up near the Lincoln Memorial.

In clips from a video that went viral almost immediately, students were shown surrounding Nathan Phillips, tribal elder for the Omaha Tribe, who was chanting and beating a drum. The students appeared to be mocking him. Sandmann, inches away from the drummer, who never moved and was smiling, was accused of flagrant disrespect.

By the next day, extended footage of how the situation unfolded revealed that another group at the foot of the Lincoln Memorial had taunted the students and some responded back. Phillips had walked over to the students and the group, as an intervention, singing and beating a song of prayer.

After the initial viral video, some of the high school students issued their own statements about the situation, including Sandmann, who said he did not move because he wanted to show he wasn’t being aggressive. The school announced there would be a third-party investigation into what occurred.

But the wave of initial outrage against the students triggered the legal response. Sandmann’s attorneys said in a Jan. 25 statement that members of the media and others “rushed to condemn and vilify this young man by burying him in an avalanche of false accusations, false portrayals and cyberbullying that have threatened his reputation and his physical safety.”

According to news reports, the attorneys’ letters sent to more than 50 recipients Feb. 1 urge them not to destroy any documents in connection with the case.

The lawyers representing Sandmann and his family are Todd McMurtry of the Covington-based law firm Hemmer Defrank Wessels, and L. Lin Wood, an Atlanta attorney involved in high-profile defamation suits.

The list of letter recipients includes The New York Times, Washington Post, CNN and National Public Radio along with the Kentucky dioceses of Covington and Lexington and the archdioceses of Louisville, Kentucky, and Baltimore. The Baltimore and Louisville archdioceses and the Diocese of Lexington confirmed to CNS that they received the letter.

McMurty confirmed that these dioceses and archdioceses were sent “a document preservation letter.” In a Feb. 5 email to CNS, he said the letter “does not mean that a claim will be filed, but only that the Sandmann family is investigating potential claims.”

The Baltimore Archdiocese tweeted about the incident Jan. 20, without naming the student or school, saying it “condemns the disrespect shown toward a Native American elder during the March for Life. Respect for life demands all are treated with dignity.”

That tweet came after Covington Catholic High School and the Diocese of Covington issued a joint statement Jan. 19 saying they condemned the students’ actions “toward Nathan Phillips specifically, and Native Americans in general.”

March for Life president Jeanne Mancini also issued a statement that same day saying the encounter did not represent her organization or “the vast majority of the marchers” and that the students’ behavior is not welcome at the march and never will be.

The next day, March for Life said in a tweet had deleted its original tweet about the students “given recent developments.”

The Baltimore Archdiocese similarly issued a retraction later Jan. 20, saying that school authorities and parents would get to the bottom of this complex situation. And on Jan. 23, an archdiocesan statement said “initial reports of that incident were at best incomplete. Those incomplete reports led many, including the Archdiocese of Baltimore, to speak out too hastily. We apologize for doing so.”

Archbishop Joseph E. Kurtz of Louisville, a neighboring diocese to Covington, wrote in his Jan. 22 blog that he has received “many calls and email messages from people with many different viewpoints and seemingly opposite messages about the incidences involving Covington Catholic High School students at the March for Life.”

He said many people have pointed out how he initially joined Covington Bishop Roger J. Foys in a blog post condemning the alleged actions, which he had since taken down.

The archbishop said he has sought to “act in solidarity with the bishop of Covington, who is in a position to have the best information about what transpired and who has pledged an independent investigation of the situation.”

McMurtry, Sandmann’s attorney, told the Lexington Herald Leader that he will be demanding retractions and apologies in addition to possible litigation and that not all the organizations who were sent letters will necessarily be sued.

“We want to change the conversation. We don’t want this to happen again,” he told the daily newspaper, adding: “There was a rush by the media to believe what it wanted to believe versus what actually happened.”

Contributing to this story was Jacob Comello in Washington.