Pioneering Navy pilot recalled for her humility, love of faith and family 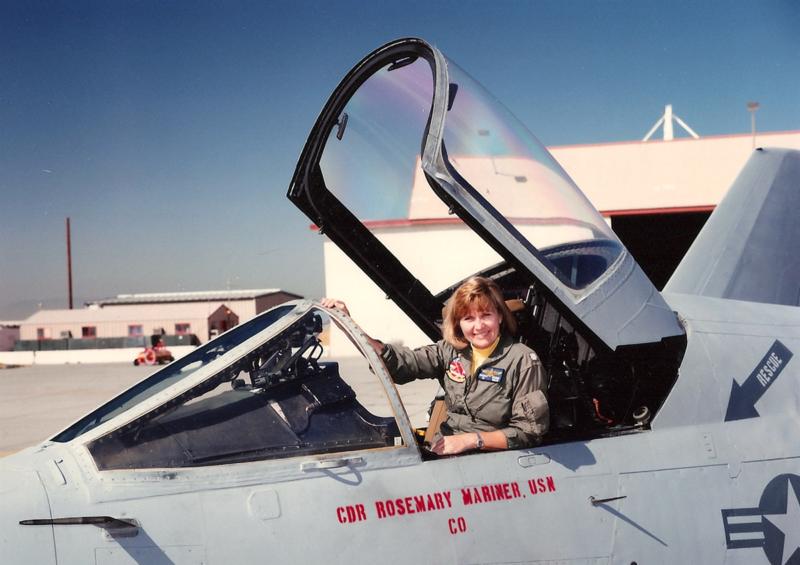 U.S Navy Capt. Rosemary Mariner, pictured in an undated photo, was the first woman to command an operational naval aviation squadron. Mariner, who in retirement taught military history at the University of Tennessee and led a Scripture study group at a rural Diocese of Knoxville parish, is being remembered for a number of firsts she achieved during a stellar military career. She died Jan. 24 at age of 65 after a five-year battle with ovarian cancer. (CNS photo/courtesy U.S. Naval History and Heritage Command)

To the world, Capt. Mariner was an aviation pioneer who broke through the ranks of the all-male military aviator corps to become the U.S. Navy’s first female attack-jet pilot. To those close to her, Rosemary was a down-to-earth wife, mother and Bible study leader who was as humble as she was faithful.

Capt. Mariner, who in retirement taught military history at the University of Tennessee and led a Scripture study group at a rural parish in the Diocese of Knoxville, is being remembered for a number of firsts she achieved during a stellar military career.

She died Jan. 24 at age 65 after a five-year battle with ovarian cancer. She is survived by her husband of 39 years, retired Navy Cmdr. Tommy Mariner, and a daughter, Emmalee.

“She was very much a pioneer,” Cmdr. Mariner said about his wife.

The Navy honored the life and legacy of Capt. Mariner by conducting its first all-female flyover during her burial service Feb. 2 at a picturesque cemetery in Hickory Valley among the hills of East Tennessee. She was laid to rest with full military honors.

Seven Navy aviators, all women, flew their F/A-18E/F Super Hornet attack jets in the “missing man flyover” formation to recognize a fallen comrade — the one who first opened the cockpit for them. The aviators were from Naval Air Station Oceana in Virginia Beach, Virginia, where Capt. Mariner had served early in her Navy career.

“Being a part of this flyover is truly an honor; being a part of something that’s honoring someone like Capt. Mariner, who really was a trailblazer for female Naval aviators,” Uttecht told The East Tennessee Catholic, newspaper of the Diocese of Knoxville. “The second piece is that it’s really awesome to be part of an all-female crew, which is something the Navy has never done for a military flyover.”

Uttecht credited Capt. Mariner with making it possible for her to be a Naval aviator and believed it important to honor the pioneer.

“Capt. Mariner truly was a trailblazer. She basically made it possible for us to do our jobs that we’re doing today,” she said.

Before retiring in 1997, Capt. Mariner, who was among the first four women promoted to captain in the Navy, had logged more than 3,500 flight hours in 15 different aircraft and made 17 aircraft carrier landings, one of the ultimate tests of a military aviator.

In addition, she earned a master’s degree from the National War College in Washington and served on the staff of the Joint Chiefs in the Pentagon.

Cmdr. Mariner described his wife as being instrumental in changing Navy regulations to allow women aviators serve in combat.

Cmdr. Mariner said his wife led efforts in the 1990s to persuade the federal government to do away with the combat exclusion rule for female aviators.

“Rosemary pushed in 1992 to get the combat exclusion rule removed,” Cmdr. Mariner said. “She wanted to open up doors and have other people walk through those doors. Rosemary always wanted to avoid being called an exceptional woman. She didn’t want to be looked at as a woman but as an individual, because that is how she treated all military personnel regardless (of their sex, race, or ethnicity).”

“She had lots of men who opened doors for her, and she used her skills and talents to keep those doors open. She was instrumental in a lot of openings the Navy made,” he recalled.

Concelebrating Capt. Mariner’s funeral Mass were Father Richard Armstrong, pastor of St. Joseph Parish in Norris, Tennessee, and Msgr. Bill Gahagan, who was pastor at St. Joseph before his retirement.

“John’s Gospel comes from the great words of Jesus and says, ‘I am the way, the truth, and the life.’ But what does ‘the way’ mean?'” he asked. “For Rosemary, she found that way in her life, in the life of her husband and family, in the life of her career, in the life of her relationships with people. In the most unassuming way, she did it Jesus’ way as far as I’m concerned.”

“She recognized within herself that the way was Jesus’ way, to see the gift that God had given her, a gift that she didn’t keep or possess to herself but reached out and gave to others in so many ways,” he continued. “All of you know this. There are hundreds and thousands of people who she has contributed her gifts and talents to in friendship, relationships, and in working with peers, to be there with them to guide and inspire.”

He emphasized that Capt. Mariner was generous in sharing her gifts.

“Rosemary did not shortchange her gifts at all. In truth, she had to do what she did; she gave the greatest gift of all to the world—the spirit of God’s life and love. We all contribute together to the building of God’s kingdom. She did it in her way,” Msgr. Gahagan said. “In life, she lived a glorious life and enjoyed life. … I am the life; I am the way, and the truth. Let perpetual light shine upon you, Rosemary.”

Rosemary Bryant was a native of Harlingen, Texas, who grew up in San Diego. She was the daughter of a Navy nurse and an Air Force pilot who was killed in a plane crash when she was 3.

At age 17, she earned her private pilot’s license, and in 1972 at age 19, she graduated from Purdue University with a degree in aeronautics, the first female student to graduate from Purdue’s aviation program that Amelia Earhart worked with. She then joined the Navy with a desire to fly planes.

In 1973, the Navy lifted its ban on naval aviation training for women, and Rosemary Bryant was accepted into the first class of female Navy pilots. In 1974, at age 21, she earned her wings and became the first woman to fly a tactical attack jet, flying the A-4E/L Skyhawk and the A-7E Corsair II.

Other firsts include her being among the first women to serve aboard a Navy warship, the USS Lexington in 1982, qualifying as a Surface Warfare Officer, and in 1991 becoming the first woman to command a military aviation squadron, the Tactical Electronic Warfare Squadron 34 (VAQ-34) based at Point Mugu, California . She was in command of the squadron during the Gulf War, although military rules at the time prohibited women from flying combat missions.

The couple, both Naval attack jet pilots, met in the mid-1970s while on assignment in California. They managed a courtship despite being in different sections of Navy aviation. He proposed to her in a tobacco field on the Mariner family farm in Union County, and they married in 1980.

Cmdr. Mariner called their relationship another Navy first — the first pilots to serve while married.

“She was an inspiration,” said Judy Curtin, who was a member of Capt. Mariner’s Bible study group at St. Joseph. “If you were to meet her, you would never know about her military achievements. She centered her life about God and not her accomplishments.”

Common refrains among those who knew Capt. Mariner were that she loved her family, friends, and flying, and she was grounded in her simple approach to life, her humility, and the Catholicism she carried with her since childhood.

Brewer is editor of The East Tennessee Catholic, newspaper of the Diocese of Knoxville.