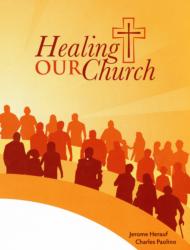 WASHINGTON (CNS) — Renew International, which has been offering small-group parish renewal series since the 1970s, has put together a six-week series for parishioners on dealing with the current clergy sexual abuse crisis.

Titled “Healing Our Church,” it offers reflections, Scripture passages, questions to participants to ponder and statements from abuse victims.

“We brought in a lot more with the victims’ voices,” said Jennifer Bober, Renew’s manager of marketing and communications, who was in on all of the development meetings for the new series. “That was something we felt was missing from the earlier resource. Just the directness of the approach, the forthrightness of the approach in this, is different. It’s a different time, and people’s response is very different.”

The Diocese of Allentown, Pennsylvania, will employ “Healing Our Church” during Lent in a big way, with nearly 70 parishes — about 83 percent of all parishes in the diocese — offering the Renew series.

Allentown had used Renew twice before, including its 2003 series dealing with clergy sex abuse, “Healing the Body of Christ.”

“We’re trying to do the best we can to meet the needs of victims of abuse, physical victims of abuse,” said Bishop Alfred A. Schlert of Allentown in a Feb. 27 telephone interview with Catholic News Service, but “the people in the pew are hurting, too.”

“Healing the Body of Christ” drew 12,000 participants when Allentown offered it 16 years ago, Bishop Schlert noted. “I don’t know what we’ll get this time. The success is not so much in the concrete number but who came, who felt comfortable to come, and who felt healing in some way,” measurements he acknowledged tend to manifest themselves in the long term.

“All of us are active in church ministry in some form or another,” Renew’s Bober told CNS, and when the latest revelations broke last summer regarding bishops’ roles in the crisis, a common reaction Renew staffers got was, “How can you stay Catholics?”

“We looked around us and we said, ‘We need to do something.’ We know that people are upset, we know people are hurting,” Bober added. “As news broke, we were reading more victims’ stories and we were seeing the power in them, and knowing that, it really made us understand the depth of the hurt that is going on. We wanted to empathize with the victims and for them to do that, we had to include their stories.”

Bober said, “We had (‘Healing Our Church’) small groups running in the office, as things were being written” to test the strength of the material being developed. “We had people within the office, some friends of people who work here from their parishes.” One of them, G. Madsen, a member of Our Lady of Peace Parish in New Providence, New Jersey, wrote in an endorsement for the back cover of “Healing Our Church,” saying that “this six-week program is a positive first step in healing the wounds suffered by faithful Catholics.”

Renew had considered introducing it in the fall, Bober said, but were dissuaded by Bishop Schlert, who wanted it sooner — and his words were used in the book’s foreword: “My people need healing now.”

“I never saw myself as cutting-edge on anything,” Bishop Schlert told CNS. “But my pastors embraced it and said, ‘We’d like to give this a try.’ That’s where the rubber hits the road, in the local parishes.”