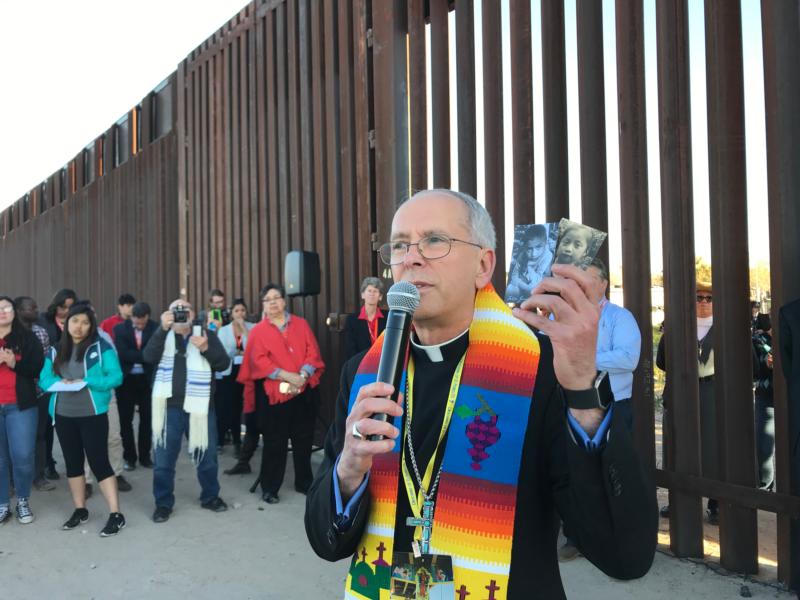 Bishop Mark J. Seitz of El Paso, Texas, holds photos of two migrant children who died in U.S. custody; he spoke during the Feb. 26 Interfaith Service for Justice and Mercy at the Border near Sunland Park, N.M. (CNS photo/David Agren)

“We can’t allow more tragedies like these. They cannot be repeated,” the bishop of El Paso, Texas, said Feb. 26 at the Interfaith Service for Justice and Mercy at the Border, celebrated by faith communities on both sides of the border.

“Innocents have died because we have done everything to keep them from finding a dignified life,” Bishop Seitz said. “The desert speaks, because on this land has fallen the blood of many who are trying to pass to find a dignified life, and we can hear the shouts of land telling us that our policies have consequences.”

U.S. President Donald Trump has declared an emergency over security at the southern border. He has sent troops to the region and doubled down on plans to expand the building of a border wall, beyond the barricades already stretching approximately 600 miles at various points along the frontier.

Church leaders and Catholic communities working on migration issues concur that there is an emergency — though not the same crisis the president describes — as migrants flee poverty and violence in Central America and encounter an increasingly cold response at the U.S. border.

Bishops from both sides of the border and Catholics working on migration matters convened a special meeting in El Paso Feb. 25–27 to plan their responses to the implementation of U.S. immigration policy, such as metering, in which migrants wanting to apply for asylum face long waits in insecure Mexican border cities as some U.S. ports of entry accept fewer than 15 claims per day.

The situation is especially pressing in dioceses such as El Paso, where parishes and a staff of 60 working on migration issues are struggling to serve hundreds of asylum-seekers arriving on a weekly basis in a series of 13-15 shelters operated in conjunction with churches of all denominations.

Diocesan staff provide services such as legal assistance, while parishes have organized volunteers, who visit and help feed and clothe asylum-seekers.

Migrants and asylum-seekers have long streamed through the El Paso area in search of safety and opportunities, while many in the community are not far removed from the immigrant experience, something diocesan officials say has fomented a sense of solidarity and willingness to help out.

“Locally, a lot (of the response to migration) is done by civil society and religious groups,” said Marisa Limon, deputy director of the diocesan HOPE Border Institute in El Paso.

Dioceses in Mexico, meanwhile, are attempting to assist migrants, including many arriving in caravans, who must wait to apply for asylum and, increasingly, are being sent south of the border — through a plan known as “Remain in Mexico” — to wait as their cases proceed through clogged U.S. courts.

“We’re very concerned about ‘Remain in Mexico,'” Limon said. She said resources already were stretched thin in Ciudad Juarez, noting the diocesan migrant shelter there was already full and could not welcome migrants seeking long stays.

“We’re just managing to keep people from sleeping in the streets” in El Paso, where many of the asylum-seekers need shelter for “two or three days,” while waiting to travel to other parts of the country and stay in the custody of their families as they await court dates, said Columban Father Bob Mosher, a member of the HOPE board of directors.

On the Mexican side, “It could be a couple months or a couple years” of waiting, he said, “and that’s after they get their petition for asylum received.”

Ciudad Juarez, where Pope Francis celebrated Mass at the border in 2016 and decried the prospect of building a wall, was known as murder capital of the world a decade ago.

Though it has calmed somewhat since 2012, the homicide rate remains high, especially in comparison to El Paso, which has long been one of the safest cities in the United States, according to crime statistics.

Church leaders in the border cities such as El Paso have spoken out against the prospect of building a bigger wall on the U.S.-Mexico border. Bishop Seitz referred to the wall as “a great scar across our land, dividing us.”

At the interfaith service, participants on both sides of the border spoke through the tall, steel slats of a fence cutting across the desert. U.S. participants squeezed into a dusty strip of land between a railway line and the border, while many on the Mexican side came from Corpus Christi Parish in the Puerto de Anapra neighborhood of Ciudad Juarez.

Bishops from the borderlands blessed the parched landscape with holy water. Immigrants spoke of family separation and the fear of living with the prospect of deportation. People voiced opposition to the border, as much for symbolic as security reasons.

“We reject this wall with its message of scarcity and hatred and fear,” one participant on the Mexican side said in a reading.

“Things speak,” Bishop Seitz said, explaining that the wall sent a message, easily interpreted by people on both sides of the issue.

“If our understanding of the narrative is that we’re facing an invading army from the South, then we’re going to have people thinking about this wall,” he told Catholic News Service. “But if we understand that the vast majority who are wanting to cross are simply people who are seeking to save their lives, the lives of their children, then this wall becomes an awful sign of intransigence, of closed hearts of the rejection of people in need.

“It’s the exact opposite of the best impulses that have built our country from the start,.” Bishop Seitz said.