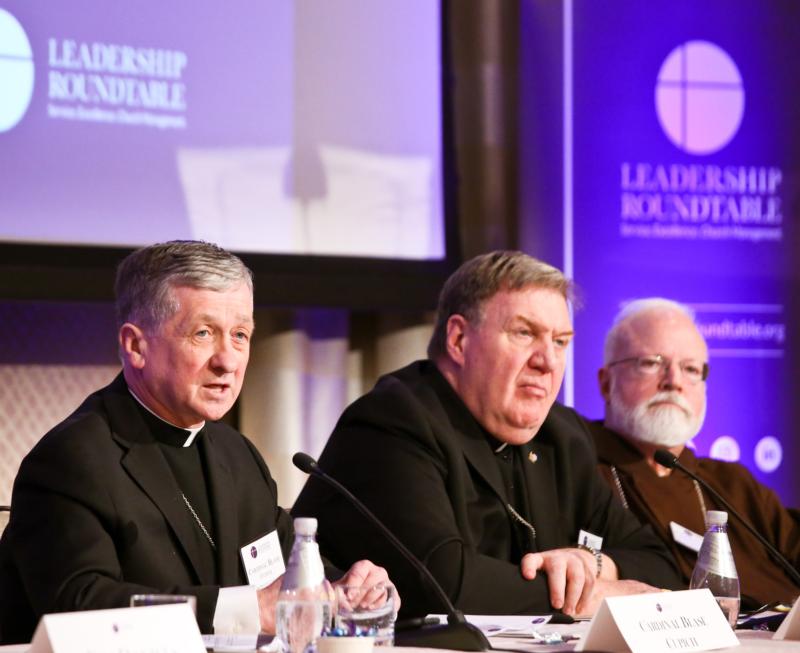 These were conclusions discussed at two events in Washington: a lawyers’ panel at the Catholic Information Center, sponsored by the Thomas More Society Jan. 31, and a media conference Feb. 2 following the Leadership Roundtable’s Catholic Partnership Summit Feb. 1-2.

The summit, which included three cardinals, university and college presidents and canon lawyers representing 43 dioceses, is expected to issue a document with recommendations in a couple of weeks.

The key term at both discussions was “emerging best practices” for identifying abusers and bringing them to justice.

Some of the participants in the summit spoke to the press in a teleconference afterward.

There are “twin crises” of leadership and sexual abuse, said Kathleen McChesney, a former FBI agent and former head of what is now the Secretariat for the Protection of Child and Youth Protection at the U.S. Conference of Catholic Bishops. “Survivors have been telling us for 15 years that there are two crises.”

However, they also were told “that they are somehow responsible. There are people who enabled these men to offend.”

“We as bishops have to respect the need for the laity to be involved, and in principle, the whole church is going to have to be utilized in resolving the twin crises,” said Bishop W. Shawn McKnight of Jefferson City, Missouri. “As one person put it, I think so eloquently, ‘If all we have is miters and collars around the table, we won’t get anywhere. Where are the mothers and fathers?'”

Key to any solution is transparency, and the largest element of that is for dioceses to release “the names of those credibly accused,” Bishop McKnight said.

He also called for a “cultural mindset conversion as well as specific norms and processes. We need to commit to having a good study, a foundational research to understand the root causes of the problem that we’re in.”

“People without influence and without connections need to be a part of this,” said John Carr, director of the Initiative on Catholic Social Thought and Public Life at Georgetown University.

“The church should be speaking up effectively and credibly on behalf of the vulnerable, whether it’s unborn children, whether it’s children taken away from their mothers at the border, whether it’s the poor and vulnerable,” he said. “And one of the real tragedies to the crisis is, that voice has been undermined and can be marginalized.”

Ahead of the Catholic Partnership Summit, which was not open to media coverage, the Leadership Roundtable said the event’s focus on the abuse crisis included looking at the impact of the crisis on “the youngest generation of Catholics.”

“Leadership Roundtable believes that Catholic leaders, lay and ordained, must create a new culture of leadership and management that is transparent, accountable, competent and grounded in best practices in order to provide justice to survivors and credibly lead the church into the future,” it said in a statement.

In remarks at a different event on the abuse crisis, one held at the Catholic Information Center, Ed Condon, a canon lawyer and Washington bureau chief for Catholic News Agency, said the crisis was, in part, rooted in regarding sexually abusing the young and vulnerable as an illness, not a crime.

“Because they (clergy abusers) were sent to treatment and given a clean bill of health, and this was considered enough to put them back into ministry,” he said.

He also criticized “an acceptance of the false dichotomy between justice and mercy.”

One of Condon’s suggestions was to have “public (lay) prosecutors in every diocese” for sexual abuse investigations. “If we want something powerful and effective, it has to come out of the individual dioceses.”

Condon recommended abolishing “indeterminate penalties,” which he called “the equivalent of mandatory minimums.”

Mary Leary, a law professor at The Catholic University of America’s Columbus School of Law, called for an “independent, outside, top to bottom review, not reporting to the hierarchy” but to the public. “Genuine healing requires accountability.”

Leary recommended an investigative structure “more like an inspector general model independent of the hierarchy” rather than lay attorneys general.

“Abuse is not an American problem. It’s a Catholic problem,” she said. “There is anti-Catholic bias in the press, but not about this. This is not a problem of homosexual priests.”

Leary described the crisis as “an absolute failure to recognize the realities of child sexual abuse,” and she claimed this was compounded by lengthy cover-ups.

“That’s the problem we’re dealing with today,” she added. “In 2002, we were told (by the bishops) ‘We will take care of this,’ and now we’re discovering that they were not serious.”

Since 2002, the U.S. Catholic dioceses and eparchies have followed protocols for addressing abuse spelled out in the bishops’ “Charter for the Protection of Children and Young People.” After the charter’s first approval, the document was revised in 2005, 2011, 2015 and most recently in 2018.

It spells out strict procedures for removing credibly accused abusers from ministry, for training children and all adults who work with them through the church to recognize and appropriately handle possible sexual abuse and created diocesan and national mechanisms for monitoring compliance.

Last June, the 15th annual report on the implementation of the charter showed a decrease in allegations of clergy sex abuse from the two previous years but also indicates the need for continued vigilance since charges were raised by more than 650 adults and 24 minors.

In the last year, as allegations were brought forward against former Cardinal Theodore E. McCarrick, claiming he had abused a child decades ago and as a New Jersey bishop had been sexually inappropriate with seminarians, the U.S. Catholic bishops have been urged to address alleged misconduct by bishops, which is not covered by the charter.

In November during their fall general assembly, the bishops were prepared to vote on several protocols, including proposed standards of episcopal conduct and the formation of a special commission for review of complaints against bishops for violations of the standards.

However, the Vatican requested the bishops delay their vote until after a February meeting Pope Francis will have at the Vatican with presidents of the bishops’ conferences around the world to focus on addressing clergy abuse.

PREVIOUS: Opioids claiming lives and affecting many others, say panelists