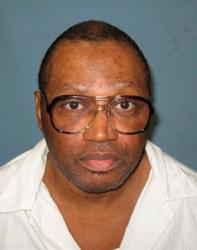 Vernon Madison, one of Alabama’s longest-serving death row inmates, is pictured in this handout photo. (CNS photo/Alabama Department of Corrections handout via Reuters)

WASHINGTON (CNS) — The Supreme Court is sending a death-row case back to the lower courts to determine if the inmate’s dementia, brought on by strokes he suffered while on death row, should prevent him from being executed.

In the 5-3 ruling Feb. 27, the justices sided with Alabama prisoner Vernon Madison for now, saying the lower court should look at his case again.

Madison, who killed a police officer in 1985, suffered strokes in recent years that left him blind and with vascular dementia and significant memory loss. He cannot tell what season or day it is, and he doesn’t remember committing the crime.

Justice Elena Kagan, writing the court’s majority opinion, pointed out that Madison’s dementia is enough of a reason to re-examine his case, noting that the Eighth Amendment, which bans cruel and unusual punishment, “doesn’t care about the particular diagnosis,” or in other words should not apply only to someone with a mental illness or intellectual disability, which the court has previously established.

Kagan was joined by Chief Justice John Roberts and Justices Ruth Bader Ginsburg, Sonia Sotomayor and Stephen Breyer. Justice Brett Kavanaugh did not vote on the case since it was argued before he was confirmed to the court.

Bryan Stevenson, Madison’s attorney and executive director of the Equal Justice Initiative, said the court’s decision affirmed “the basic principle of a humane system of justice.

“Prisoners who become incompetent due to dementia and severe mental illness are vulnerable and should be shielded from abusive and cruel treatment,” he said in a statement.

Alabama Attorney General Steve Marshall saw the court’s ruling as a bump in the road, noting in a statement that he expects the lower court to “once again find that Madison is competent to finally face the justice that he has so far evaded for nearly 34 years.”

Sister Helen Prejean, a Sister of St. Joseph of Medaille and longtime advocate against the death penalty, said in a Feb. 27 tweet: “Why is Alabama trying to execute a 68-year-old stroke survivor? Vernon Madison is blind, can’t walk without assistance, and doesn’t have any memory of the crime that landed him on death row. Why was this even a question? Our death penalty system is broken.”

After the case was argued before the court in last October, Krisanne Vaillancourt Murphy, executive director of Catholic Mobilizing Network, a group that champions restorative justice and an end to the death penalty, said state prison systems are increasingly “faced with the question of how to execute people with severe mental and physical health problems.” In particular, she pointed to the fact America’s death-row populations are getting older and the average death-row inmate spends 15 years awaiting execution.

During oral arguments about Madison, Breyer had a similar observation, pointing out that Madison’s medical problems were not that unusual since death-row inmates are older on average than they used to be and have been awaiting execution for 20 to 40 years.

“This will become a more common problem,” he said.