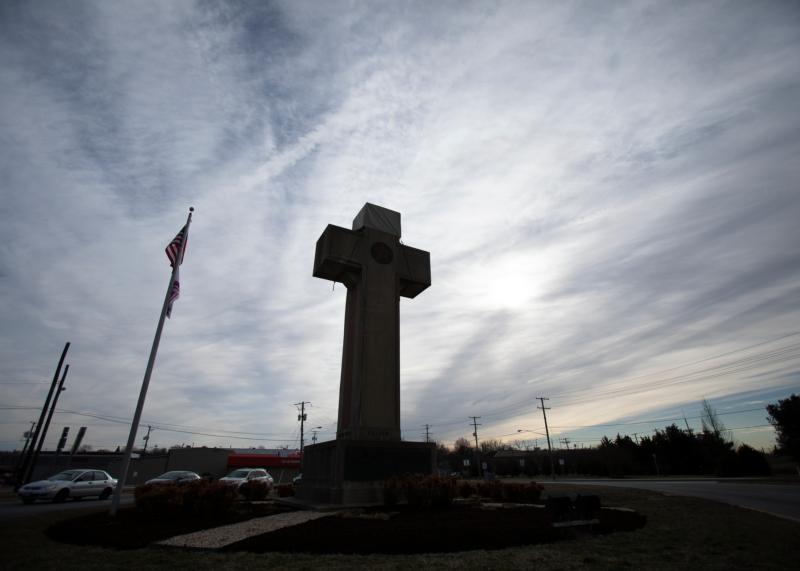 A cross-shaped World War I memorial, a landmark in Bladensburg, Md., is pictured Feb. 26, 2019. The U.S. Supreme Court will hear oral arguments Feb. 27 to consider if the 40-foot cross endorses religion or is just a secular memorial. The cement and marble cross, which is on a median strip on government property in Bladensburg, memorializes local soldiers who died in World War I. (CNS photo/Tyler Orsburn)

BLADENSBURG, Md. (CNS) — The day before the U.S. Supreme Court heard oral arguments about a cement memorial cross in a grassy median strip in an intersection of a Washington suburb, there was no fanfare at the cross itself.

Although there was fresh mulch around it, the dark gray monument was chipped, had some cracks and a letter on one of the four words at its base — endurance, valor, courage and devotion — was dangling. Cars drove by in both directions and the only pedestrians were a few reporters and people going into the pawn shop across the street where bikes, lawn mowers and generators lined the sidewalk.

Only by dodging traffic and approaching the monument by foot would one see the names of the 49 local soldiers who died in battle during World War I — which is why the monument exists. Mothers of the fallen soldiers came up with the idea in 1919, and it was completed by the American Legion six years later. Today it is owned by a Maryland parks commission.

The Supreme Court will now have to consider if the memorial — in the shape of a Latin cross symbolic of the markers on graves of soldiers killed overseas during World War I — endorses religion or is simply a secular monument.

The monument located in Bladensburg is near a larger park honoring veterans with memorials to the War of 1812, World War II, the Korean and Vietnam wars and the 9/11 attacks.

A woman driving by the monument Feb. 26 was not happy about the possibility that the 40-foot monument could be taken down and told this reporter: “It’s not about Christianity; it’s about our country.”

A worker at the pawn shop across the street similarly didn’t see what people found offensive about the monument known as the Peace Cross, pointing out that that it wasn’t like some monuments that are offensive.

But plaintiffs in the case — local residents who are offended by a cross on a parcel of government property and the American Humanist Association, a Washington-based group that represents atheists and others — say it violates the Establishment Clause of the First Amendment and “discriminates against patriotic soldiers who are not Christian.” They want the state to either remove the monument or to alter it so it no longer is in a cross shape.

The court will hear these arguments Feb. 27 and may redefine if a symbol qualifies as a religious endorsement.

Richard Garnett, law professor at the University of Notre Dame, said the case “presents a new opportunity for the justices to clarify the law regarding public religious symbols.”

Over the years, the court has been clear on some church-state distinctions but not so clear on a way to evaluate religious holiday displays or memorial crosses.

“The pending war memorial case is the first ‘clean’ religious-symbols case in almost 15 years and, during that time, six new justices have joined the court,” Garnett said in Feb. 21 Notre Dame news release.

“The court is very unlikely to say that the Constitution forbids the display or use of religious symbols — including crosses — on public property. Such a ruling would put the justices in stark and uncomfortable conflict with long-standing practices. However, some of the justices will likely be looking for a compromise solution that could ‘grandfather’ in older memorials that incorporate crosses while discouraging new ones,” he added.

Garnett also said another big question is if a majority of the court can agree with an idea some justices have proposed over the years — that memorials and displays using religious symbols do not coerce religious activities or entangle church and state because they are not “establishments” of religion. If the justices don’t agree on that, he said there will likely be more challenges like this and confusion about how to resolve them.

The Trump administration has joined dozens of religious, municipal and veterans’ groups defending the cross monument and complaining that the court’s mixed messages about religious symbols have forced legal battles on a case by case basis.

The Thomas More Law Center, a nonprofit law firm with a focus on religious liberty, said in a friend-of-the-court brief that the monument’s purpose is not to advance or inhibit religion but to “honor the dead using a historical symbol of death and sacrifice.”

“The decision to destroy this memorial, which existed without complaint for nearly a century, simply because the plaintiffs, passing motorists, claim to be offended by the memorial’s use of the Latin cross, evidences an intolerance to religion, and Christianity in particular, that is wholly inconsistent with our nation’s history and with the purpose and meaning of the First Amendment’s Religion Clauses,” it said.

The brief also said doing away with this memorial “fails to respect the decision of the bereaved parents who 100 years ago chose to honor their lost children with the monument as it currently exists.”

An amicus brief from family members of those honored in the monument similarly vouched for the cross to remain.

“For nearly a century, the Peace Cross has stood as a memorial, a representative gravesite and a tribute to the men it honors. In contrast to the ‘religiously-based divisiveness’ its destruction would provoke, the Peace Cross has for many decades brought families and communities together to remember the sacrifices and service of the soldiers of Prince George’s County,” the brief said, urging the court to let it stand for future generations.