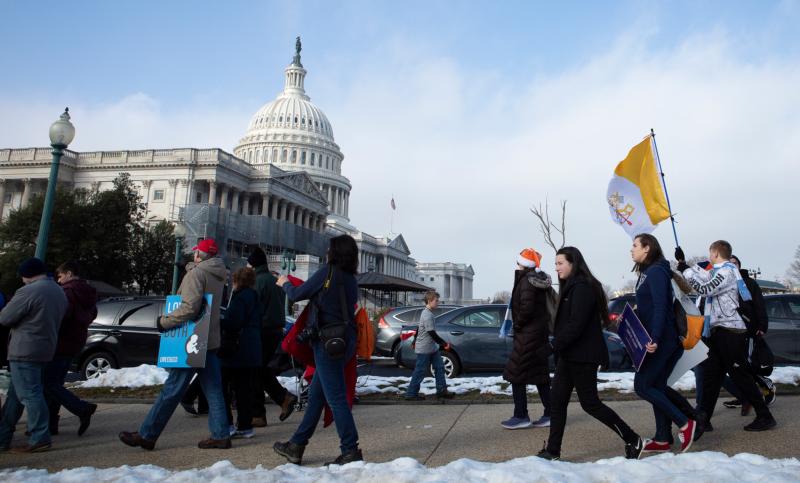 Pro-life advocates are seen near the U.S. Capitol during the annual March for Life in Washington Jan. 18, 2019. In an evening vote Feb. 25, the Senate failed to pass a measure sponsored by Sen. Ben Sasse, R-Nebraska, to require that babies born alive after an abortion be given medical attention and “the same protection of law as any newborn.” (CNS photo/Tyler Orsburn)

UPDATED – WASHINGTON (CNS) — The Senate in an evening vote Feb. 25 failed to advance a measure sponsored by Sen. Ben Sasse, R-Nebraska, that would have required babies born alive after an abortion to be given medical attention and “the same protection of law as any newborn.”

The vote to bring the Born-Alive Survivors Protection Act forward was 53-44. Sixty votes were needed to invoke cloture and cut off a filibuster of the measure, which Sasse’s press office said was co-sponsored by half the Senate.

“I want to ask each and every one of my colleagues whether we’re OK with infanticide,” Sasse said on the floor ahead of the vote. “This language is blunt. I recognize that and it’s too blunt for many people in this body. But frankly, that is what we’re talking about here today. Infanticide is what the Born-Alive Abortion Survivors Protection Act is actually about.”

Protecting babies who “are alive, born outside the womb after having survived a botched abortion … is what this is about,” he said.

The chairman of the U.S. Conference of Catholic Bishops’ Committee on Pro-Life Activities said that a vote against the bill was “a vote to extend Roe v. Wade’s license for killing unborn children to killing newborn babies.”

“There should be no bill easier for the Senate to pass than one that makes clear that killing newborn babies is wrong and should not be tolerated,” said Archbishop Joseph F. Naumann of Kansas City, Kansas, said in a Feb. 27 statement. “That even one senator, let alone 44 senators voted against the Born-Alive Abortion Survivors Protection Act, is an injustice that should horrify and anger the American people and commit us to decisive political action.”

He added, “The American people, the vast majority of whom support this bill, must demand justice for innocent children.”

Kristan Hawkins, president for Students for Life of America, called Sasse’s bill “the bare minimum standard for valuing infant life, as everyone should be able to look at a baby born during an abortion and understand that a humane response is required.”

“Too many important votes are forgotten, but this one won’t be. These kinds of tactics in which a win is a loss can disillusion voters, but allowing infants to die after being born alive will rally pro-life Americans when it counts.”

On Feb. 4, Sasse called for senators’ unanimous consent on his Born-Alive Abortion Survivors Protection Act, S. 311. “Everyone in the Senate ought to be able to say unequivocally that killing that little baby is wrong. This doesn’t take any political courage,” he said from the floor.

He invoked Senate Rule 14 to bypass the committee process on the bill. In response Sen. Patty Murray, D-Washington, blocked unanimous consent by objecting to the bill, arguing current federal law protects a child that survives an abortion.

The next day the chairman of the U.S. bishops’ Committee on Pro-Life Activities called it “unconscionable” that the U.S. Senate failed to “unanimously declare to the nation that infanticide is objectively wrong.”

“No newborn should be left to suffer or die without medical care. It is barbaric and merciless to leave these vulnerable infants without any care or rights,” Archbishop Joseph F. Naumann of Kansas City, Kansas, said in a Feb. 5 statement.

After Senate Majority Leader Mitch McConnell, R-Kentucky, said Feb. 14 he was scheduling a roll-call vote for Feb. 25 to advance the bill, Sasse said he was thankful, because then “every American can know where their senator stands on the issue of infanticide.”

“A lot of senators spend a lot of time telling people how they fight for the little guy,” Sasse said in a Feb. 14 statement. “Well, here’s the chance for them to prove it. We’re going to have a vote on the Born-Alive Abortion Survivors Protection Act and everyone is going to have to put their name by their vote.

“It’s cowardly for a politician to say they’ll fight for the little guy but only if the little guy isn’t an actual seven-pound baby who’s fighting for life. It shouldn’t be hard to protect newborn babies — let’s pass this legislation.”

In the aftermath of the failed vote to advance Sasse’s bill Feb. 25, the next steps will be to reintroduce the measure and it would first be taken up by the Senate Judiciary Committee. Just when is a decision to be made by the chairman, Sen. Lindsey Graham, R-South Carolina.

A spokesman at Sasse’s office told Catholic News Service Feb. 26 that procedurally, the same bill cannot be reintroduced for consideration, so the measure would be changed slightly.

In his remarks about S. 311, Sasse said it would not outlaw abortion at any stage of pregnancy. “This bill doesn’t have anything to do with Roe v. Wade,” he said, referring to the 1973 Supreme Court decision legalizing abortion nationwide. “This bill is exclusively about protecting babies that have been born and that are outside the womb.”

Reaction to the failed vote in the Senate included a statement from Catherine Glenn Foster, president and CEO of Americans United for Life, who called the bill a “straightforward and common sense bill” and said the Senate’s inability to advance it “is the latest sign of our needlessly polarized times.”

She said many recent national polls show that “huge majorities even of pro-choice Americans oppose abortion in the final months of pregnancy and oppose denying babies medical care after birth.”

Opponents of the Sasse bill say it is not necessary because of the 2002’s Born-Alive Infant Protection Act, signed into law by President George W. Bush.

It defines a “born alive infant” as “person, human being, child, individual.” It also defines “born alive” as the complete expulsion of an infant at any stage of development that has “a heartbeat, pulsation of the umbilical cord, breath, or voluntary muscle movement, no matter if the umbilical cord has been cut or if the expulsion of the infant was natural, induced labor, cesarean section or induced abortion.”

Supporters of the Sasse bill say the 2002 law is only “definitional” and does not include enforcement mechanisms or criminal penalties against abortion providers, and the current legislation would close those loopholes.