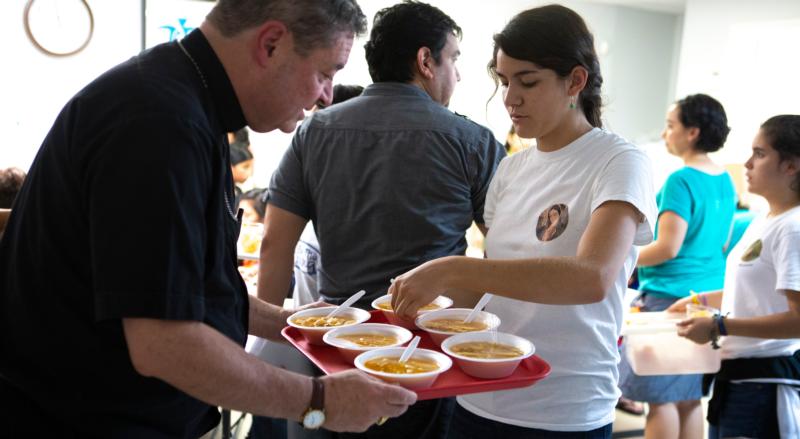 Bishop Robert J. Brennan, auxiliary bishop of Rockville Centre, N.Y., helps a volunteer at a Catholic Charities-run respite center in McAllen, Texas, serve soup July 1 to immigrants recently released from U.S. custody. A delegation of U.S. bishops has traveled to the Diocese of Brownsville, Texas, to learn more about the detention of Central American immigrants at the U.S.-Mexican border. (CNS photo/Chaz Muth)

WASHINGTON (CNS) — A group of city commissioners in the border city of McAllen, Texas, voted in mid-February to remove from a building a popular Catholic-administered center run by Sister Norma Pimentel, who has been praised by Pope Francis for her work with migrants.

McAllen city commissioners voted Feb. 11 to vacate within 90 days the building that Catholic Charities of the Rio Grande Valley uses to provide temporary shelter for immigrants who cross from Mexico into the United States but who have been released by federal authorities.

Sister Pimentel, who has won national and international praise for the type of work that takes place at the center, is the executive director for the charitable agency that runs the temporary shelter, which provides food, clothes, a shower and other necessities for migrant children and adults passing through the city in the Diocese of Brownsville, Texas.

Residents were complaining to city commissioners about activity in their neighborhood that they said was coming from what’s known as the “respite center,” which began occupying the space in December, said a Feb. 11 story by the local newspaper, The Monitor. But Sister Pimentel, according to the report, said during a meeting to discuss the issue that the families the shelter helps are receiving services inside the building.

“They don’t go wandering around,” she said, according to the newspaper story.

Brownsville Bishop Daniel E. Flores said Feb. 13 via Twitter that “the decision of the McAllen City Commission was disheartening for many, yet, I continue to have hope in our collaborative relation with the city.”

He said the diocese, as well as Catholic Charities of the Rio Grande Valley, were committed to finding “a welcoming location to continue the work of the respite center.”

“How we treat the poor is how we treat Christ. And to give him even a cup of water invites a blessing from God,” he continued.

In a statement released by Catholic Charities Feb. 13, Sister Pimentel, a member of the Missionaries of Jesus, said she was disappointed but would continue to work with the city of McAllen “in efforts to treat immigrant families in a just and humane way and ensure that they are in compliance with existing immigration laws.”

Last summer, a group from the U.S. Conference of Catholic Bishops, which included the organization’s president, Cardinal Daniel N. DiNardo of Galveston-Houston, and its vice president, Archbishop Jose H. Gomez of Los Angeles, visited a respite center, but in a different location, that Catholic Charities runs in McAllen.

The work of “welcoming the stranger” that takes place at the center has been the focus of fundraisers at the Vatican, featured on news shows, and has caught the attention of those such as Kerry Kennedy, Robert and Ethel Kennedy’s daughter, and TV celebrity Gayle King.

When President Donald Trump visited McAllen Jan. 10, Sister Pimentel invited him to visit the respite center, but he did not make a stop there.

The original respite center in the area began in 2014, when Sister Pimentel saw an influx of immigrants arriving in Rio Grande Valley region and with local volunteers, she began a makeshift operation to help the migrants obtain clothes and food. Out of a property that belonged to the local Sacred Heart Church, they began clothing and feeding the newcomers.

Since then, respite centers at various temporary locations have helped thousands of migrants, many seeking asylum and passing through the border city, have access to a shower after a harrowing trip, a clean change of clothes, a quick medical exam, if they need it, a warm meal and sometimes a snack for the road. Catholic Charities of the Rio Grande Valley is raising funds to build a permanent facility.

“Our mission remains unchanged — to restore and recognize the human dignity of all vulnerable people — throughout our community including those seeking asylum,” Sister Pimentel said in the statement issued following the decision.

Contributing to this story was Rose Ybarra in San Juan, Texas.