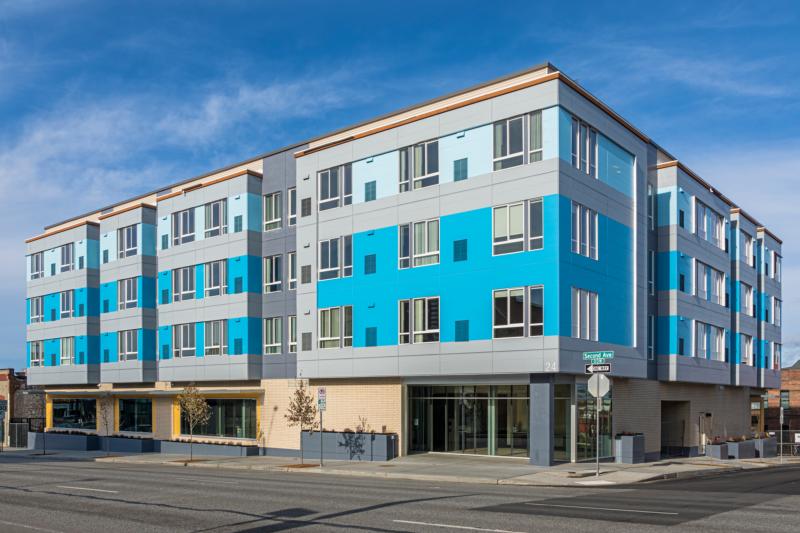 “This is basically co-locating the services with the housing. We’re taking a look at not only partnering with Catholic health associations but taking advantage of access to property that most of (Catholic Charities) members have,” said Curtis Johnson, vice president of affordable housing at Catholic Charities USA.

In some communities, structures being eyed include vacant buildings on parish land such as schools and convents that can be redeveloped into housing, Johnson told Catholic News Service.

In other dioceses, apartments already have been developed in which key social services, mental health counseling and case management are offered.

Chronically homeless people are among the primary users of hospital emergency room care across the country because they do not have ready access to a physician or a medical clinic when they become ill or injured. After discharge, homeless people often return repeatedly for care because of their lack of access to routine services on the street or a resurgence in illness or injury that caused them to seek help in the first place.

Johnson said when homeless people are released from the hospital into a stable housing program that provides other onsite services, the likelihood they will be readmitted for care falls exponentially.

That’s a plus for hospitals and municipal first responders who spend a significant amount of their time answering calls involving homeless people, said Robert McCann, president and CEO of Catholic Charities Spokane.

“The reality for us is that for the average chronic street homeless person we spend from $50,000 to $250,000 per year per person on police, fire, hospital and social service costs. On the flip side of that, for about $8,400, we can put them in one of our apartments buildings all paid for by the government,” McCann said.

McCann cited the case of a well-known homeless man who went to a local ER 62 times in one year. In 2012, the man moved into one of Catholic Charities Spokane’s apartments with onsite supportive services. “That year he went to the ER twice,” McCann said.

That got the attention of Providence Sacred Heart Medical Center in downtown Spokane, which partners with the Catholic Charities program.

“It’s not just about the money,” he continued. “It’s very rare in our world that the bottom line matches up with human dignity. It does in this equation. Now you can save a lot of money putting these folks in housing that is better for their dignity. It’s better for everybody. Every human person who is made in the image and likeness of God should be eating, sleeping and going to the bathroom indoors.”

Catholic Charities USA had heard about Spokane’s success and began further exploring how to address chronic homelessness in mid-2017, Johnson said. Agency officials soon began learning about other programs across the country.

Last June, CCUSA convened an Innovation Lab in Chicago that brought together housing experts, health care administrators, financial professionals and diocesan Catholic Charities staff with expertise in housing and health care. From that emerged the Healthy Housing Initiative, a collaborative effort begun in the hope of replicating similar programs nationwide.

Through the initiative, hospital readmission rates are expected to fall by 25 percent and 35 percent of newly housed people will be connected with primary care and behavioral health services.

In St. Louis, its first such supportive housing program for the chronically homeless is set to open in the spring with 10 “hospital-to-housing” residents.

Laurie Phillips, CEO of St. Patrick Center, one of several entities that comprise Catholic Charities St. Louis, said her agency began examining the connection between chronic homelessness and ER use in 2017.

Phillips reached out to BJC Health Care to begin identifying homeless people to connect them with housing and support services. BJC’s foundation and Catholic Charities St. Louis provided funds for the effort. Now it will receive additional support from CCUSA.

“We’re beyond thrilled by what this (partnership) means to our community and all the support from Catholic Charities USA in terms of funding, connecting with housing developers and other support,” Phillips told CNS.

Catholic Charities of Oregon in the Archdiocese of Portland has developed affordable housing for years and recently began looking into permanent supportive housing options for the chronically homeless.

Deacon Richard Birkel, executive director, said parishes offer the best option in the archdiocese for developing such a program because they have unused buildings that can be readily developed.

Providence St. Joseph Health system is deeply interested “because they often bear the cost of extended hospitalization and high rates of emergency room use” by people without homes, he said.

Establishing a program at a parish also will help the men and women in need of housing a community in which to feel connected, Deacon Birkel told CNS.

“That’s the beauty of this. (The parish) is an overlooked asset. Not only the property, the land, but the engagement of the parish community in supporting people,” he said.

“That’s why we thinking this is not something that has to be done on a large scale. It’s welcoming homeless folks into the community, building a parish-based program that supports these folks on their journey.”

NEXT: Catholic organizations scrutinize what works best in fighting poverty