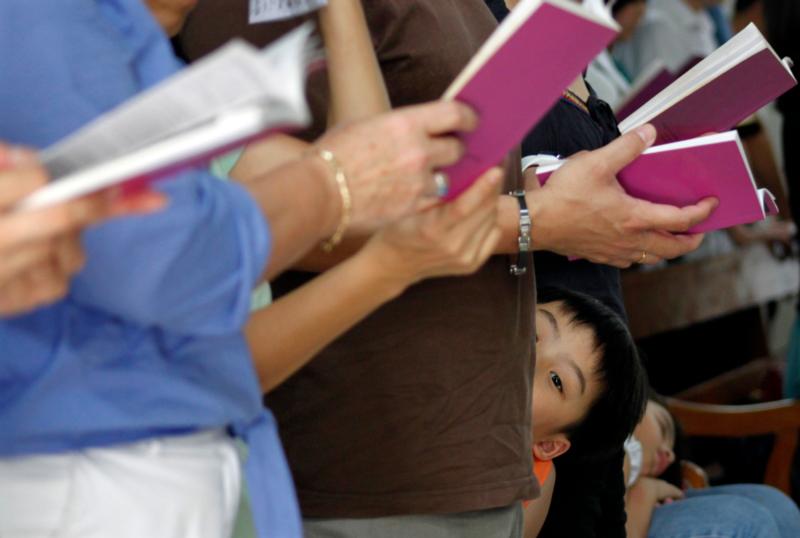 A boy attends Mass with his family at the Church of Sts. Peter and Paul in Singapore April 2, 2010. “The scandals abroad are a wake-up call for us, as the Catholic Church in Singapore has not been spared allegations of child abuse,” Singapore Archbishop William Goh said. (CNS photo/May Naji, Reuters)

BANGKOK (CNS) — Recent credible sexual abuse allegations in India and East Timor have underscored the fears of many in the church that clerical sex abuse is rife in South, Southeast and North Asia, which have a collective population of at least 120 million Catholics.

In Kerala state, India’s Catholic heartland, a nun claimed that she was sexually abused by Bishop Franco Mulakkal, who has voluntarily stepped down as head of the diocese of Jalandhar while he is investigated. Revelations that American Richard Daschbach, a former Divine Word priest, was found to have been abusing underage girls at an orphanage he ran in Oecusse, East Timor, have opened further cracks in the veil of denial and silence about the conduct of priests with minors and women just ahead of Pope Francis’ summit on child protection. Daschbach has been laicized.

Archbishop Charles Scicluna of Malta, president of the doctrinal congregation board that reviews appeals filed by priests laicized or otherwise disciplined in sexual abuse or other serious cases, told reporters last October in Rome that the idea that clerical sex abuse is “a problem linked to any culture or geographic part of the world … is a myth that has to be dispelled.”

Archbishop Simon Poh Hoon Seng of Kuching, Malaysia, is one of the few Asian prelates who has spoken out, arguing that the crisis is not one limited to the West.

The Philippines, with about 80 million Catholics, is the epicenter of the church in Asia and has seen more public cases of abuse against both minors and women and in recent years than other Asian countries. These include claims by Philippine President Rodrigo Duterte — a critic of the church — that he was a victim of clerical abuse as a youth.

Benedictine Sister Mary John Mananzan, a Philippine activist, told Catholic News Service she knows of multiple cases involving priests with boys, girls, nuns and laywomen. She described the problem as “big enough to be a real problem, especially at this time when we have a president who uses this issue to attack the Catholic Church.”

Sister Mananzan also accused the country’s bishops, who did not respond to requests for comment on the matter, of not taking enough action.

“When I was the co-chair of the administrative council of the AMRSP (Association of Major Religious Superiors in the Philippines), we had a committee composed of our officers (five) and five bishops of Catholic Bishops’ Conference of the Philippines,” she said.

“I remember we suggested to the bishops that the church should have an inner tribunal where there is a provision for victims to file their complaint, a due process conducted and a penalty for those who are convicted — (not just transferred to another place.) As far as I know, no such tribunal exists.”

Clerical abuse has also surfaced in South Korea, where there are about 6 million Catholics. In 2018, Kim Min-kyung, a laywoman, said an unnamed priest sexually abused and tried to rape her during a volunteer mission in South Sudan. Kim said she was inspired to come forward by the global #MeToo movement.

Archbishop Hyginus Kim Hee-joong, president of the Catholic Bishops’ Conference of Korea, apologized in February 2018 and said the priest had been removed from his parish pending an investigation.

“All bishops leading the South’s Catholic Church, myself included, have been left shocked, baffled and devastated by this incident,” he said.

It’s clear there is more to come. The case of the Indian nun triggered an investigation by the Associated Press, which reported Jan. 1 on the decades-long culture of abuse of nuns — and laywomen — by priests in India.

“You’re not sure if you’ll be kept in your congregation, because so much is about your vow of chastity,” Sister Shalini Mulackal, a New Delhi-based theologian and member of the Presentation of the Blessed Virgin Mary sisters, told AP. “That fear is there for the young ones to disclose what has happened to them.”

Fear of shame and social standing holds back abuse victims in Asia, according to priests interviewed by CNS in Pakistan, Myanmar, East Timor and Australia. Another problem highlighted by clerics and others in Southeast Asia is that priests and bishops are treated similarly to Buddhist monks, who are protected by governments and laws in a string of countries from Myanmar to Vietnam.

Jesuit Father Federico Lombardi, former Vatican spokesman, whom the pope has named as mediator of plenary sessions for the February summit, has acknowledged that Vatican-approved guidelines have been adopted by only about half of national bishops’ conferences. Of the dozen bishops’ conferences in Asia contacted by CNS regarding their policies to deal with clerical abuse, only the Archdiocese of Singapore provided a response.

“The scandals abroad are a wake-up call for us, as the Catholic Church in Singapore has not been spared allegations of child abuse,” Singapore Archbishop William Goh said in a September pastoral letter.

“Over the years, a handful of cases have been brought to our attention,” he said. “These were handed over to the Professional Standards Office of the archdiocese for investigation. Thus far, all the cases have been judged to be inconclusive by the PSO and confirmed by the Congregation for the Doctrine of the Faith in Rome. As archbishop, I want to assure you that, to the best of my knowledge, there has been no cover-up in our archdiocese.”

NEXT: Pope reflects on changed attitudes toward liberation theology