Harming a child must be ‘line in the sand’ for removal, cardinal says 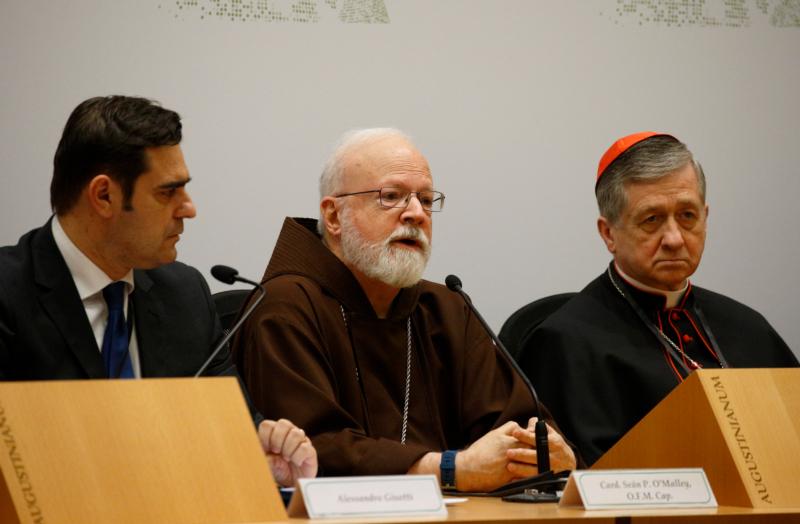 Alessandro Gisotti, interim Vatican spokesman, Boston Cardinal Sean P. O’Malley, president of the Pontifical Commission for the Protection of Minors, and Cardinal Blase J. Cupich of Chicago attend a media briefing Feb. 22, 2019, the second day of the Vatican meeting on the protection of minors in the church. (CNS photo/Paul Haring)

VATICAN CITY (CNS) — For the Catholic Church, there is a “line in the sand,” which can never be crossed, and that is to not allow anyone who harms or would harm a child to exercise public ministry, said Cardinal Sean P. O’Malley of Boston.

In fact, removing someone from public ministry for abuse should be seen not so much as a punitive act as much as it is an urgent pastoral and “prudential” measure to keep young people safe, added Archbishop Charles Scicluna of Malta.

The cardinal and archbishop spoke with reporters Feb. 22 at a news conference during the second day of a Vatican summit on child protection in the church.

They were responding to questions as to why there seemed to be resistance or reluctance to adopting “zero tolerance” policies and why, in some cases, leaders are hesitant to even use the term.

One reporter noted that, to the dismay of survivors gathered in Rome, “zero tolerance” was not mentioned on a list of 21 points Pope Francis distributed Feb. 21 for reflection — points that had been compiled from ideas bishops had provided beforehand.

Cardinal O’Malley, who is a papal adviser on the Council of Cardinals and president of the Pontifical Commission for the Protection of Minors, said, “I know there is a lot of resistance to using that terminology,” perhaps it sounds too “secular, I don’t know.”

But he said zero tolerance reflects a principle that was “so clearly articulated” by St. John Paul II in 2002 when he said that there is no place in the priesthood or religious life for those who would harm the young.

That principle, Cardinal O’Malley said, “has to be a line in the sand.”

Responding to a related question, he said he would advocate the removal of a person from ministry for all cases of abuse against minors everywhere and clarified that additional penalties — such as dismissal from the clerical state or a life of prayer and penance — would vary, following the principle of proportionality of punishment.

Archbishop Scicluna said another way to look at the situation would be to see removal from ministry as an action that “has nothing to do with punishment, but (is) a prudential and urgent” measure that is taken to guarantee the safety of minors.

The issue of proportionality applies to the variety and severity of penalties that an ordained minister could receive if found guilty, said the archbishop, who also serves as president of the doctrinal congregation board that reviews appeals filed by priests laicized or otherwise disciplined in sexual abuse or other serious cases.

But when looking at what should be done across the board with a person who has harmed a minor, there is no question that the person cannot remain in public ministry, he said.

“I think even those people who do not like the concept of zero tolerance because they do not exactly know what it is, they would never dare say, ‘Well, there’s someone who could do harm to young people’ and they leave him in ministry,” he said.

Removal reflects the person’s unsuitability for ministry and is not primarily a question about punishment, which can vary case by case, he said.

“I don’t remove a person from ministry to punish him, but to protect the flock,” the archbishop said.