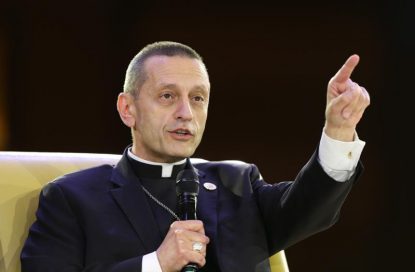 Bishop Frank J. Caggiano of Bridgeport, Conn., called sex abuse by clerics a “crime and sin” in a recent video message. He is pictured during the Catholic convocation in Orlando, Fla., July 2 , 2017. (CNS photo/Bob Roller)

WASHINGTON (CNS) — In a video posted Feb. 11 on YouTube, Bishop Frank J. Caggiano of Bridgeport, Connecticut, offered support for the “many sisters and brothers who have been wounded, violated, hurt and abused at the hands of priests and deacons” and whose sexual abuse in their youth “changed their lives forever.”

“The crime and sin of sexual abuse in our midst is a deep evil that has created a deep wound,” said Bishop Caggiano, who has been one of the most outspoken U.S. bishops on the topic of sex abuse by clergy.

Getting rid of the “evil” is not enough, he said, calling on others to offer support for those who have been victimized, “those whose lives sometimes have been completely shattered.”

To move forward as a church, he said, its members have to stand with those who have suffered abuse.

“They, too, can be a light to us, to continue to teach us new ways to be renewed and purified and reformed,” he said. “When a family experiences a great wound or crisis, it is a moment, an opportunity, to come together and in that coming together make the love of Christ ever more real in our midst because it is only Christ who can heal a broken life, a broken heart.”

Last August, as a Pennsylvania grand jury published a report alleging past abuses, some decades old, by Catholic clergy and other church workers and a supposed cover-up in parts of the state, Bishop Caggiano began addressing what he called the “scandalous events.” He also condemned revelations about alleged abuse on the part of former U.S. Cardinal Theodore E. McCarrick, which are still being investigated by church officials.

“I have been sick to my stomach,” he said in an Aug. 17, 2018, statement released by the Diocese of Bridgeport, just days after the Pennsylvania grand jury report. “Words like horrifying, betrayal and diabolical come to mind describing the evil abuse that was perpetrated against children, who were robbed of their innocence, and often of their faith and future. The failure of some bishops to report this evil is equally stunning and deeply sinful.”

Since then, he has not shied away from addressing the topic, including by speaking about it before a group of U.S. pilgrims at World Youth Day in Panama in January.