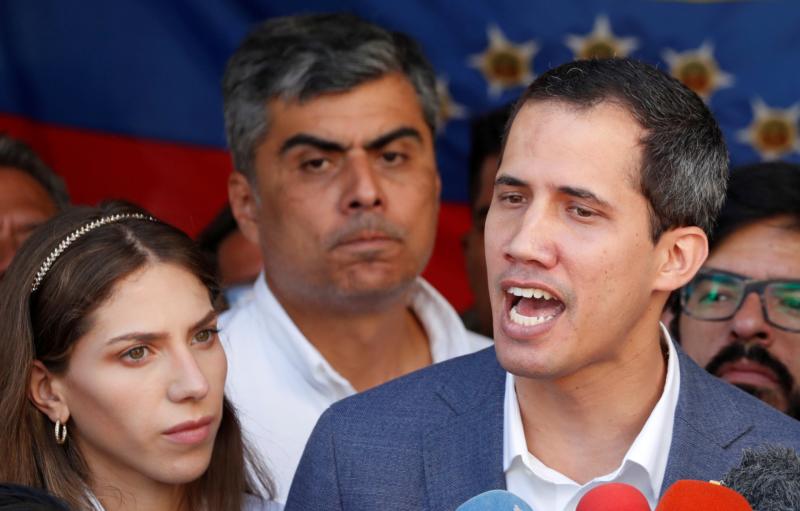 Venezuelan opposition leader Juan Guaido, alongside his wife, Fabiana Rosales, speaks to the media after attending Mass in Caracas Feb. 10, 2019. Although it has publicly taken a neutral stance in the current political crisis in Venezuela, the Vatican has expressed its support for new elections in the country within the year, said a member of a delegation representing Guaido. (CNS photo/Andres Martinez Casares, Reuters)

ROME (CNS) — Although it has publicly taken a neutral stance in the current political crisis in Venezuela, the Vatican has expressed its support for new elections in the country within the year, said a member of a delegation representing opposition leader Juan Guaido.

Archbishop Pena said the Vatican “is willing to help and do everything possible so that this year we may have free elections in Venezuela,” Diamanti said Feb. 12 during a briefing with journalists at the Italian Foreign Press Association in Rome.

The delegation was in Rome to solicit the support of the Italian government in recognizing Guaido as interim president of Venezuela.

A constitutional crisis reached a critical point following Venezuelan President Nicolas Maduro’s inauguration Jan. 10. Allegations of rigging by local and international monitors prompted Guaido, who was president of the opposition-led legislature, to assume the presidency.

While more than 50 countries have recognized Guaido as the legitimate Venezuelan head-of-state, the Vatican has chosen to remain neutral and focus on the sufferings of the local population.

Alessandro Gisotti, interim Vatican spokesman, confirmed the delegation’s visit and reaffirmed the “proximity of the Holy Father and of the Holy See to the people of Venezuela.”

“In addition, the grave concern was underlined that a just and peaceful solution be urgently sought to overcome the crisis, respecting human rights and seeking the good of all of the inhabitants of the country and avoiding bloodshed,” Gisotti said in a Feb. 11 statement.

Diamanti told journalists that while Archbishop Pena reiterated the Vatican’s neutral stance in recognizing either Maduro or Guaido as the country’s leader, it does “support the Venezuelan bishops’ conference,” which has “recognized Guaido as interim president, as per our constitution.”

In a statement released on the eve of Maduro’s inauguration Jan. 9, the Venezuelan bishops labeled his government “illegitimate.”

“We are living in a de facto regime,” the bishops said. “The attempt to begin a new presidential term on Jan. 10, 2019, is illegitimate in its origins, and it opens the door for the nonrecognition of the government.”

Diamanti told journalists that the interim leadership appreciated the support of the Venezuelan bishops and, while short of recognizing Guaido as president, they understood the Vatican’s support for elections.

Free elections, he said, “would provide a way of moving forward amid this crisis that is not only human but also political. We need all possible resources because it is not easy to leave a dictatorship like the one we have in this moment.”

During a news conference with journalists Jan. 27 on his flight to Rome from Panama, Pope Francis said that while he fully supports the suffering people of Venezuela, picking a side in the crisis “would be pastoral imprudence on my part and would cause damage.”

“That is why I had to be — I don’t like the word ‘balanced’ — I must be a shepherd to all, and if they need help, then they must come to an agreement and ask for it,” he said.

The pope said he thought carefully about his words to the people of the country because “I suffer for what is happening in Venezuela in this moment.”

“What is it that scares me? Bloodshed,” the pope said. “And that is why I ask for generosity from those who can help resolve the problem.”

NEXT: In video, Bridgeport bishop calls sex abuse by clerics crime and sin